We had crammed in all the activities the previous day for the simple reason we only had one day, now we were moving on to La Fortuna. The morning van ride took us down from Santa Elena to Laguna de Arenal where we caught a boat across the lake and thereby cutting hours from the road journey. The landscape around Monteverde is mountainous and very much reminded Keryn and I of New Zealand what with the farmed hills, dusky green forest and the gravel road. Even farmed the landscape was beautiful and we spent the two hour ride looking at the view. Other than dairy and beef cattle we also saw coffee plantations, dark green rows of plants stripping down steep hills. On the ride to the boat trip yesterday our guide had pointed out the living fences and we saw more of this today; specially planted rows of plants that grow into fence posts, the primary one being a kind of yucca. I presume these fences are maintained by pruning as there normally isn’t a lot of vegetation, just a woody trunk.

We drove down the mountain roads and started levelling out next to a wide, fast flowing river. This river got wider and soon entered a lake, out first destination. There were a couple of restaurants and a number of tourist vans, people inside having something to eat or just waiting for the boats to arrive. We got out and joined in, watching the lake and the distant boats get slowly closer. There were three boats in the end, most people piling into one while our group almost had a boat to ourselves.

The trip across the lake was slow and calm, punctuated with a short rain shower. We were heading to the east end of the lake and rising before us into the low cloud cover was VolcÃ¡n Arenal, another active volcano. We disembarked next to the back end of a large dam, the machinery for the sluice gates poking out of the water and rusting slowly. More vehicles were waiting, Keryn and I sharing a taxi with Aaron and having probably the most space we’ve ever had in transit on this trip so far with only the two of us in the back seat. We were first to our hotel in the town of La Fortuna after a ride of only twenty minutes.

The volcano dominates the town landscape, rising to the west above the low-rise buildings and spaghetti of power lines. After everyone had arrived and we’d had some time to get organised in our rooms we joined Josh and he led us across to the Desafio tour agency where we were given a run down on the activities possible over the next few days. I must also add that we were plied with beer and non-alcoholic drinks during the presentation, always a good way to make happy customers! Keryn and I signed up for three different activities; firstly a nature walk in the coming evening on the lower slopes of the volcano followed by a drive to a viewpoint to try and see the flowing lava; secondly a boat trip the next day along the Cano Negro and finally (after some gentle persuasion from Cecylia) a white water rafting trip the following day which would also be our travel day to San Jose. 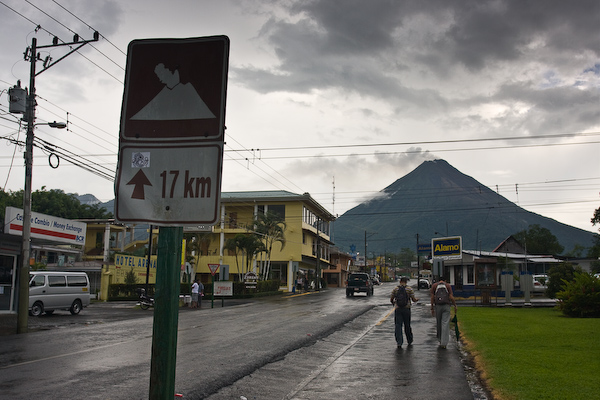 With everyone signed up for their choice of activities Josh took us out and we walked around town to see where the essentials could be found; food, internet etc. It was wet and grey but the view to the volcano was clear, wisps of smoke and fumes blowing from the summit. We had some lunch and the afternoon was taken up sorting out some photos for Peter and Stefan and then burning them to CD.

Around 4pm the Desafio van arrived and those going on the walk got in and we were driven up to the volcano and the adjacent reserve. Entering the reserve we had a brief stop to photograph some toucans playing in a tree and then it was on to the reserve car park. At this stage the volcano summit was covered in cloud and we all hoped it would clear up later so we could see the lava. We were given information on the last eruption of the volcano and the constant activity since 1968 which has formed a number of different active craters, each rising up and then blocking only for a new crater to open up. The current active crater is on the north face of the volcano and is growing at six metres a year. Unlike Pacaya in Guatemala this volcano has pyroclastic eruptions (extremely violent eruptions of gas and rock which travel at fast speed enveloping anything in the way – the most dangerous kind of eruption), the lava that is ejected ever few minutes is in a mostly solid form and the glowing rocks bounce down the slopes of the volcano. Only specialists and madmen get any closer than about 3kms to the summit. 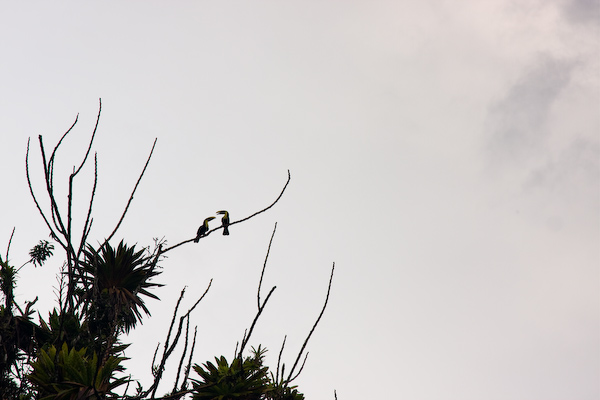 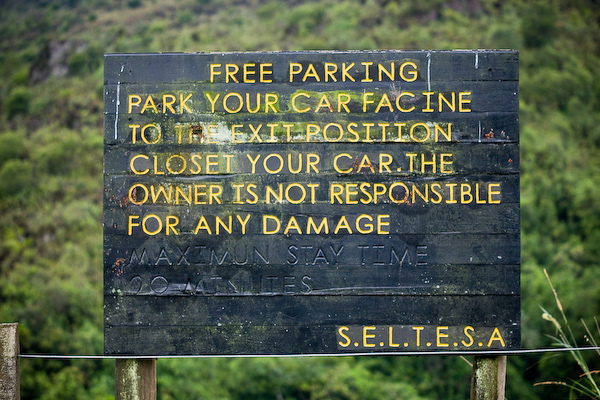 Our walk took us into secondary and primary rainforest. We saw a few birds though nothing that hadn’t been seen on other trips. The highlight came as the rain was starting. We stopped to look at the view and our guide turned around and noticed a tiny eyelash viper curled up on a small plant. These guys are deadly without the application of anti-venom so we kept our distance, even though the snake would have been no more than thirty centimetres long. The snake didn’t move, Josh told us that it could stay in the position for days waiting for prey to come by. This is the first proper snake Keryn and I had ever seen in the wild; there was a snake in Africa but I only saw its tail disappearing into the grass so it doesn’t count. Keryn was my lighting assistant, her torch nicely highlighting the snake for one good photo. 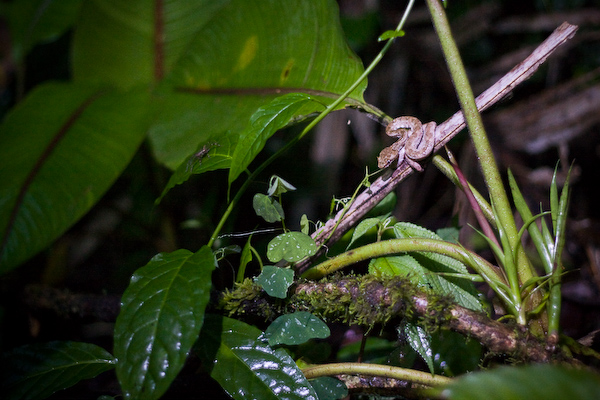 Moving on the rain started to get heavier and we trudged on head down, eventually coming to a small lodge where the van was waiting for us. we had opted for a pizza dinner on the trip and with the wet weather it was decided to eat now and hope that the rain would clear later on, giving us the view we wanted. For this to happen we needed a heavy downpour for half an hour or so as after such an event the skies would clear. The rain was certainly thunderous as we ate, lightning a constant occurrence and the booms reverberating across the sky. 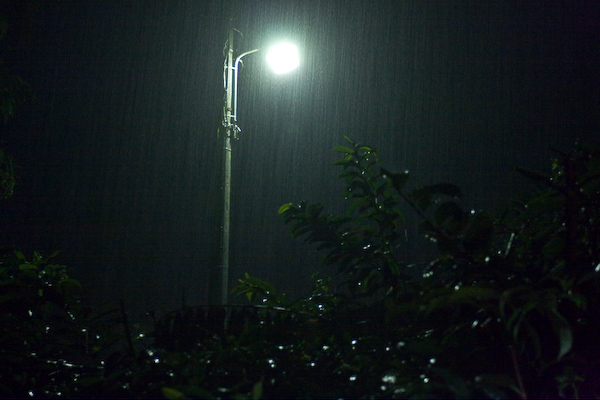 The rain was calming down as we got into the van for the drive to the lava viewpoint. It was now very dark and driving along we were trying to see what the weather was doing and peering through the tall roadside vegetation to try and see if we could see the volcano. When we arrived we got out and there it was, a dark stain on the slightly lighter night sky with red pinpoints of lava visible through the mist and thin swirling clouds. I had the tripod with me and set up to see what I could do. Experiments with long exposures bought out good results as you can see below (though the focus is way off, it’s hard to get sharp focus when it’s so dark I discovered). In the time we had we saw a number of small eruptions, red balls of lava bouncing slowly from the summit and also from a crater half way down the slope. The guide had a spotting scope trained on the eruption points and everyone too turns getting a close up view. It was captivating, I could have stayed all night. 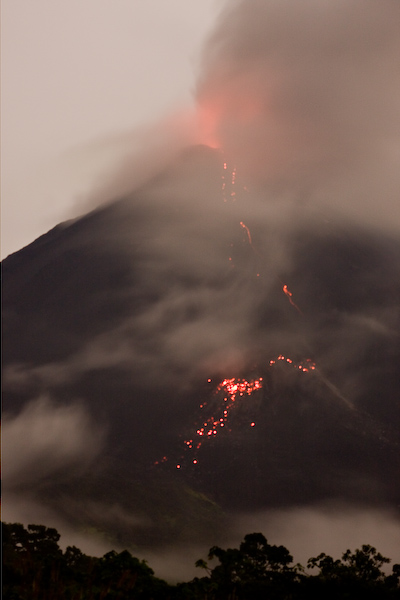 Our viewing had to end and we were taken in the van back towards La Fortuna, stopping at the Baldi hot springs resort. It was still raining as we got changed into our swimwear and headed to the pools and the next few hours were spent relaxing in the many different pools. It was luxurious and oh so peaceful, the perfect end to the day. From Baldi it was a short drive into town and we were dropped off at the hotel relaxed and ready for bed.