We had planned to book a dive trip this morning before heading out to Isla Cozumel via the downtown ferry. Ben and Lisa joined us as we walked into the town, stopping for food and to pop into dive shops so Keryn could figure out what she needed to do to go diving. After the talk the night before it had become obvious that Keryn would need a refresher dive before she could go reef diving so we tried to find a place that could do this. This proved difficult, in the end we were advised to visit a dive shop on Cozumel and see what they could sort out.

That decided we headed for the ferry. By the ferry terminal we were heading for the ticket office when we were cajoled into listening to a sales pitch for snorkelling off the island. He was very good at his job and in the end we had all signed up for two hours snorkelling for $25 US a piece. The usual price $40 US so we felt like we had got a deal, even if we didn’t really know what the boat looked like, what condition the gear would be in and how many other people would be with us. 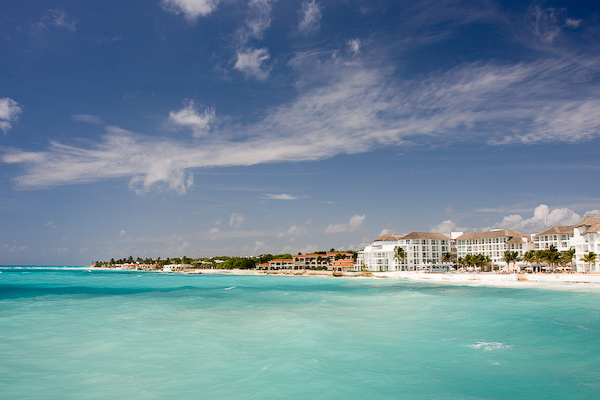 The view from the ferry to Cozumel

The ferry was easy to catch; we bought one way tickets and lined up with all the other people. The journey took about forty minutes and was a bit rough at the start but soon smoothed out. Sitting on the top desk we had entertainment provided by a good band, playing Spanish and English pop-rock. The music helped the journey pass by quickly and we disembarked to look for our snorkelling tour. At the end of the pier by the main road we found our man and we were each given a wristband and then told to wait for a few minutes while the boat was bought to dock. In the end there were only five of us, we were joined by a Spanish speaking woman in addition to the captain and tour leader.

We headed along the coast in our little boat which would have held a dozen people comfortably. There was a narrow glass bottom in the middle of the boat, Keryn and I sitting on one side with Ben and Lisa and the other woman on the other side. The water was very clear and we could easily see to the harbour floor, fish passing underneath and the occasional flounder, ray and starfish also visible. We passed two large cruise ships docked at the harbour and further on another even larger cruise ship lay at rest. Eventually we came to an area that had a number of small vessels slowly moving around pods of people snorkelling. 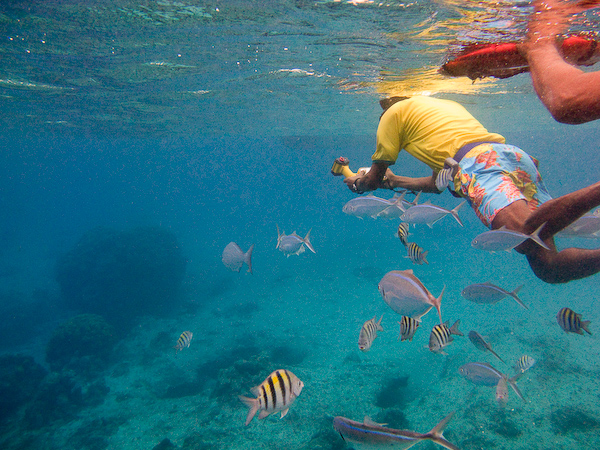 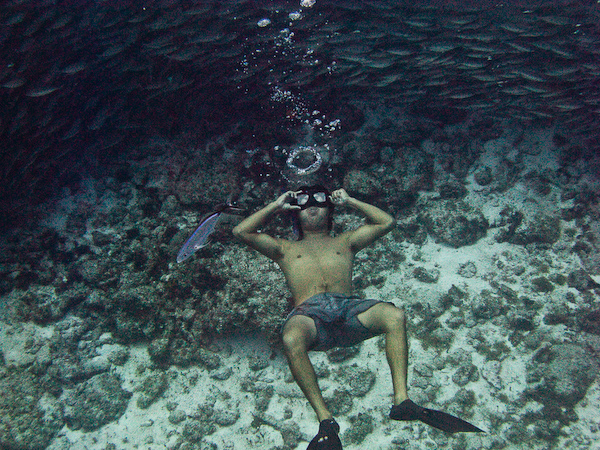 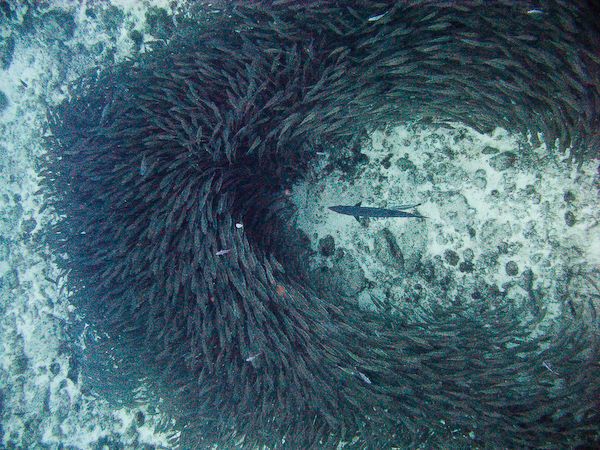 The school of fish

The snorkelling was good, the water clear and warm and the fish plentiful and varied. The coral below was mostly disappointing, a result of the hurricane that had passed through a few years previously (and presumably not helped by the masses of tourists visiting daily). The highlight of our two snorkels was the sight of a school of fish grouped together on the sea floor, massed in an ever moving ball that broke to allow larger fish through. A barracuda entered the ball and smoothly the shape changed to horseshoe, then a doughnut before blowing out as the predator snapped at a meal. The barracuda glided off and our tour leader dived town, the doughnut of fish forming around him. He faced the surface and blew rings of air before heading back up to us above. 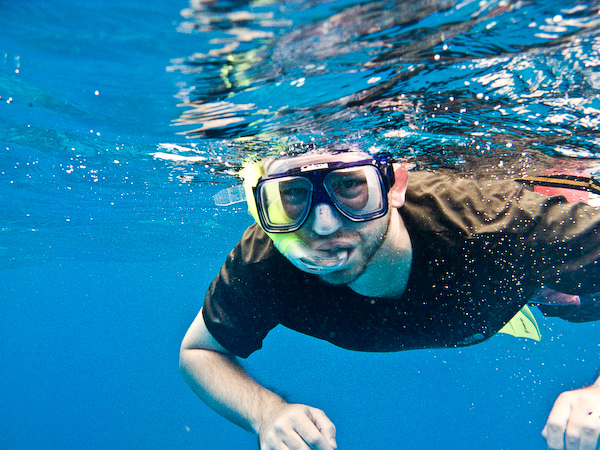 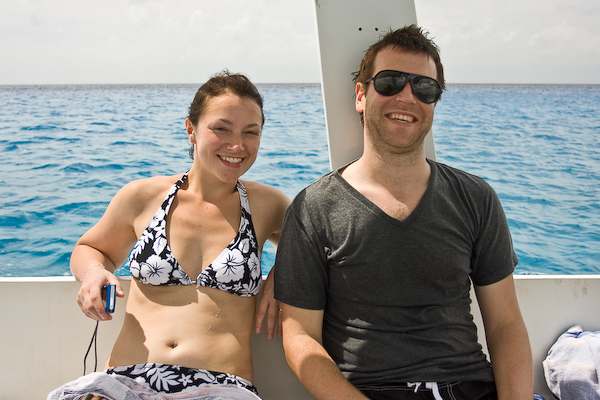 Lisa and Ben relaxing on the journey back to port

The trip back saw us each with a small drink, relaxing as the boat slowly made its way through the waves. Keryn had her camera with underwater housing again and the trip leader had taken a few photos for us from below. Keryn had also taken a shot of the other woman and we gave her one of our cards (with email and names) so she could email us to get a copy. We gave a tip as we disembarked and then headed into the Cozumel town for lunch.

We ate at a quiet place on the edge of the Zócalo. Ben and Lisa headed back to the ferry terminal while Keryn and I ended up walking a few kilometres down the coast to find the dive shop we had been told about in the morning. We were going to get a taxi but with the cruise ships in town the prices were inflated so we decided to walk instead. At the dive shop we talked to a nice lady and it was decided that we would return in a few days (our tour takes us to Cancun for the start of the next leg before returning to Playa del Carmen). Keryn would do a refresher dive off the beach early in the morning and then join a scheduled trip out to a reef later on. The scheduled trip was diving and snorkelling so I’d get to come along as well. This done we flagged down a taxi for the return to the dock and boarded a ferry back to Playa del Carmen. 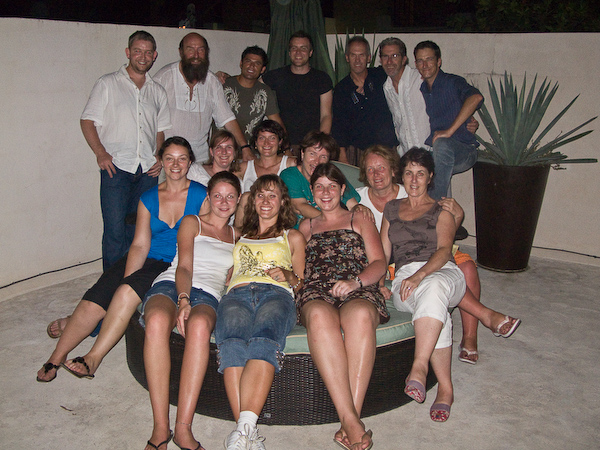 This was the last night this particular group would be together so Juan Pablo had organised a final meal. Held at a very nice hotel we had a table of a large terrace, nice lamps suspended above us and large kerosene torches giving nice ambient light. With just the group on the terrace it was intimate and we all had ample opportunity to chat and eat the lovely food. Juan Pablo gave a nice speech thanking us all for making it a good trip and Ben stood to return in kind, giving a nice summary of our adventures as well. Afterwards we headed into the club area of Playa and had a drink, though the prices meant Keryn and I didn’t have more than one. With the Australian contingent we walked down to the beach at 11:30pm; one of the bars holds a fire show each evening so we stood in the sand and watched a dazzling display as a number of people danced and twirled fire sticks, ropes aflame, hoops with burning stubs attached and more. It was a really good show, more than worth the small tip we gave at the end. The show complete we started heading back to the hotel. We didn’t really say goodbye to anyone; many we’d be seeing the next day, if not at the hotel then in Cancún for the start of the next section. Unfortunately some we thought we’d see again we didn’t, mainly because we slept in quite late. It would have been nice to say goodbye to Ben and Lisa, Paul and Debbie, Terry and Sue. We’ll have to send emails once we get the group list from Juan Pablo. 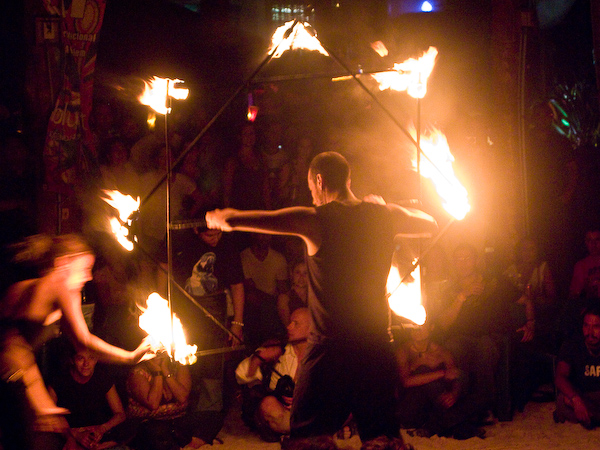 So that was it, the first part of our sojourn completed. Next stop the bright lights of the big party at Cancún.

One thought on “Day 14 : Playa del Carmen and Isla Cozumel”