Our journey today took us by bus to Chichén Itzá, one of the seven newly crowned wonders of the modern world (or something like that). Chichén Itzá is famous for its large Mayan ruins and is mostly known for the large El Castillo Pyramid at its centre. For a couple of hours in the middle of the day we walked the site, moving from shade by tree to shade by wall with a guide who was both knowledgeable and funny. A large site we walked around El Castillo and were shown pictures of the lighting conditions that happen at the spring and autumn equinoxes; the evening light picking out triangles up the side of the pyramid from the carved heads at the base of the 91 stairs giving the image of a snake for a few hours. The number of sides, stairs, levels and other parts of the building all relate to the Mayan calendar in ingenious and amazing ways. 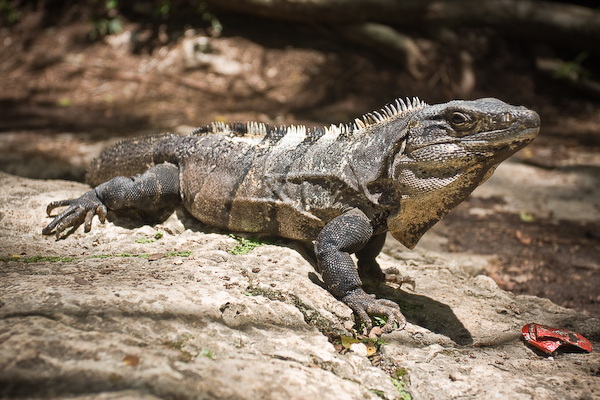 Just like the ruins we’re starting to see iquanas everywhere 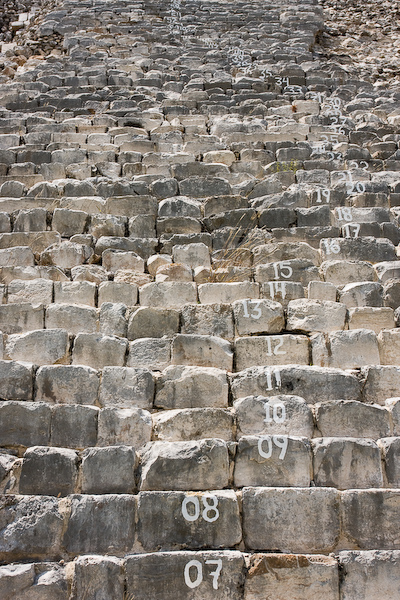 Counting the steps on one side of El Castillo 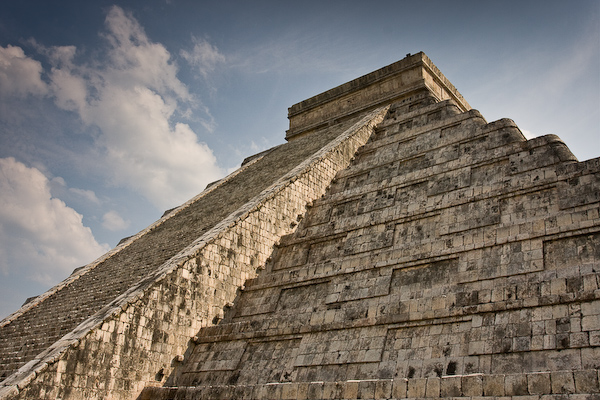 We enjoyed the time with the guide and the walk around but it was punishingly hot. Juan Pablo had arranged a late lunch for us when we returned to the visitor centre and this was taken in a lovely air-conditioned room at the back of a restaurant. The food was OK but the temperature was fantastic. We had some time after lunch for some more wandering of the site so Keryn and I headed back in to take a closer look at areas we hadn’t seem like the Grupo de las Mil Columnas – a large temple structure with hundreds of standing columns. We didn’t last too long before returning and we waited with others until we could catch the next bus taking us to Playa del Carmen.

At just over three hours our bus journey saw us arriving in Playa del Carmen after sunset. Due to a bus mix-up somewhere we arrived at the wrong terminal so had to pay for our own taxi to the Hotel Carmen Inn. It was a short trip so no hardship. The Carmen Inn was a nice looking place, the rooms over three levels around a courtyard that contained a very nice looking swimming pool with a basic bar at one end, pool loungers all around and palm trees swaying in the evening breeze. Rather than do anything too strenuous Keryn and I simply went for a walk to familiarise ourselves with the area and we had a cheap meal at a fast food chip joint. We also scoped out a few dive shops but it was too late to organise anything for the following day. Done we headed back to the Hotel, turned on the air-conditioning and went to bed.