Utila was disappointing so I won’t be writing a great deal about the place, you can tell I was uninspired by the lack of photos. Mainly this was due to the weather, it rained a lot over the two full days we had on the island. Our snorkelling trip was postponed because of the wind in the morning, as it turned out no boats went out from the island at all because of the inclement weather conditions.

Keryn and I ended up walking with Matt and Aaron to try and find some freshwater caves inland from the Utila Township. The caves were allegedly near the island airstrip so we set off down the road. It took about thirty minutes or so to get to the airstrip, Aaron stopped someone along the way to try and get directions to the caves but we didn’t get anything useful really so asked again at the shop inside the small building beside the runway. The girl inside was no help so Aaron asked another random person outside and they pointed us down a dirt road heading away from the airstrip. Another twenty minutes or dirt road and mosquitoes bought us to a three way road split. Happily another person came along on his bicycle and pointed us in the right direction, a turn off back the way we had come. We were told to follow the noise of the generator and this turned out to be the islands power supply building. Asking as the generator building we were pointed directly into the adjacent wood and after a few dubious looks we followed a very rough path over the rocky ground.

It was only twenty metres or so in that we saw a sign for the caves, we’d made it! The mosquitoes had also found it, there were hundreds of the little buggers. Climbing down a short rickety wooden ladder we scrambled over the sharp, uneven rocks and found ourselves in the middle of a pool that was mostly rocks and little water. With the bugs, the rocks and the lack of anything swimmable we decided that we’d had enough of cave searching so walked back out of the wood to the road. 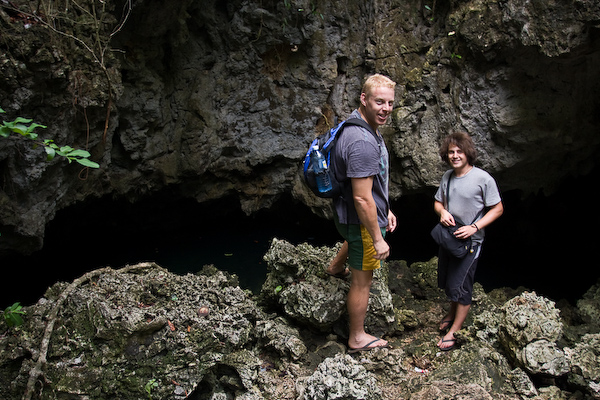 Matt and Aaron at the freshwater cave

Matt and Aaron took another side road on the way back to the town, heading for what they hoped was Pumpkin Hill, the highest point on the island. Keryn was tired, bitten and hot (I was at least bitten and hot) so we went back to the hotel for a rest and a shower. All clean and a little rested we headed out again to try and find the Utila Iguana Station, a volunteer site helping to breed the rare Utilan Iguana.

This proved to be easy but took longer than expected. We walked down roads following handy signs, just when we thought we’d got to the place we’d instead find another sign pointing us further on. The further out of town we got the more mosquitoes there were and because we had showered we had no deet on (a silly mistake to make). After a few turn offs and more walking than we’d planned we arrived. 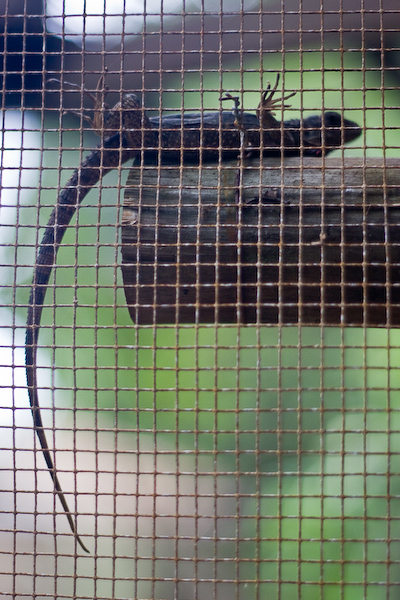 An Iguana at the Utila Iguana Station

We were shown around by a German woman (who spoke great English) and she explained, with the help of diagrams, the life cycle of the iguana and the work being down to help keep the species alive. We were also shown information on other insects and animals found on the island and saw a few of the species in little display cases such as the native wolf spider (long legs, mean looking) and tarantula (hiding in a corner, we could only see the orange and black hairs on its legs). Moving outside into the garden we went to a number of different cages holding different species of iguana, each cage tending to hold iguanas of a certain age range from a few months to much older. It was interesting but the large number of mosquitoes biting us meant we couldn’t concentrate as much as we would have liked. Once our tour was over we beat a hasty retreat back to the hotel rather than stay and look around some more.

That evening we ate at a curry restaurant. The food was good but there were a number of mix ups with orders and this resulted in a couple of free meals. After our day of walking we happily retired back to the room and after checking for mosquitoes fell quickly asleep.