We left Uyuni in the morning, just before the barracks next to the Hotel came alive with marching soldiers. We drove for most of the day, arriving in the city of Potosi with only a short while to spare before we had to join a tour of the local co-operative mines.

For the mine tour we all boarded a van and drove off through the narrow streets of Potosi towards the mine. We picked up a few extra people and then stopped off at the miners market to pick up some supplies for the miners we would meet on our tour. We bought things like malt beer, coca leaves, coca cigarettes and even dynamite. The dynamite was meant to be for us after the mine tour, we would go to a designated area and blow it up, but in the end we gave it to a miner when he asked if we had any he could have.

Potosi is built on a mountain side and there are precious few flat streets. We continued up to the mine winding our way through the one way system to eventually come to the entrance to the mine. We passed a couple of mining complexes, big machinery poking out between the corrugated iron roofs of buildings that seemed to have been constructed without a plan. The mine we were soon to enter had none of this machinery, the men working with pick axe and simple drills, blasting with dynamite and loading the ore into trolleys that were pushed along by hand. The only concession to modern times was the air being pumped into the mine through miles of rubber cabling. 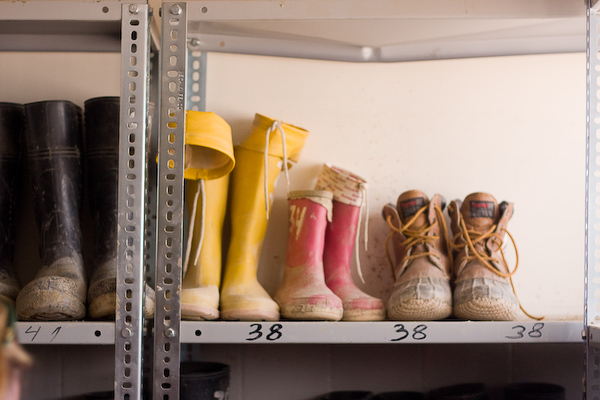 Gumboots for the mine 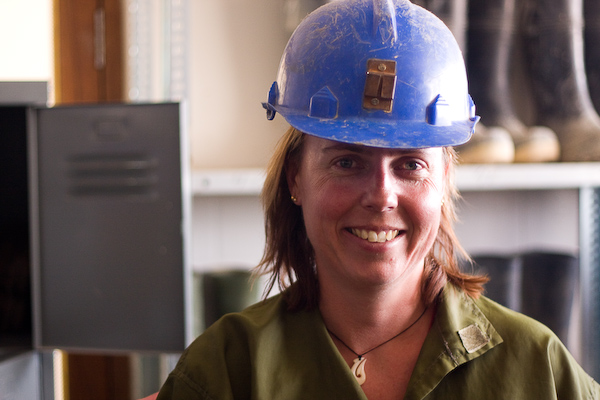 Janet dressed for the mine 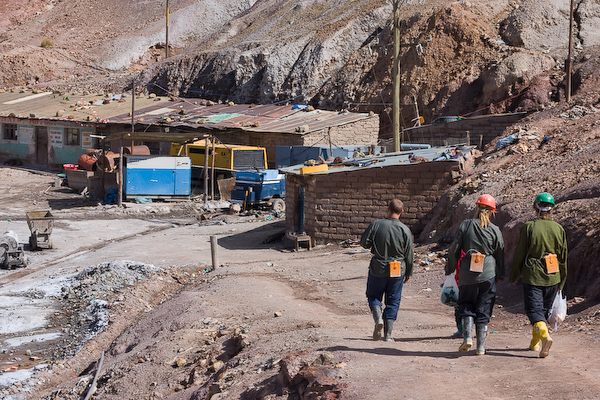 Walking down to the entrance

Before we could enter the mine we had to be given appropriate clothing. This consisted of basic clothing, a top, pants and gumboots. We also had a helmet (mine looked like it was floating above my head like some kind of plastic halo) and were given a battery powered torch to clip onto the helmet so we could see where we were going. Kitted out we walked from the changing room down to the mine entrance, a roughly carved hole in the mountainside next to the pump machinery aerating the mine. 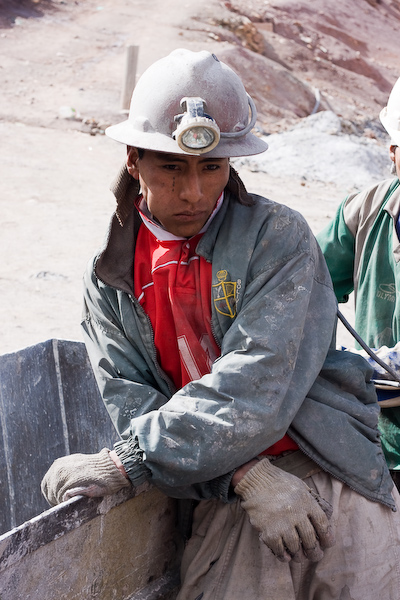 A miner waiting to enter the mine

We met some miners at the entrance, dirty and all with a bulge of coca leaves visible in one cheek. They were pushing an empty trolley and followed us into the darkness of the mine. The mine shaft at this point headed straight into the mountain and there were occasional side tunnels. Wooden props provided some security against cave in and the air cable was always present, snaking away ahead of us and occasionally hissing loudly where air was being released. Our guide explained about the mining techniques, basic as they were, and we gave out gifts as we met miners. The deeper we got the thicker the air felt and eventually we had to turn back, the smell of gas becoming too much. 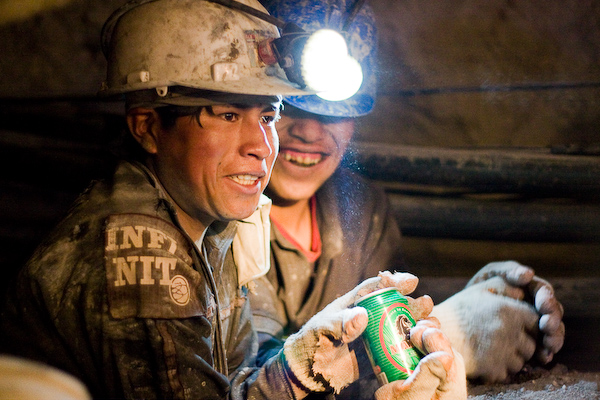 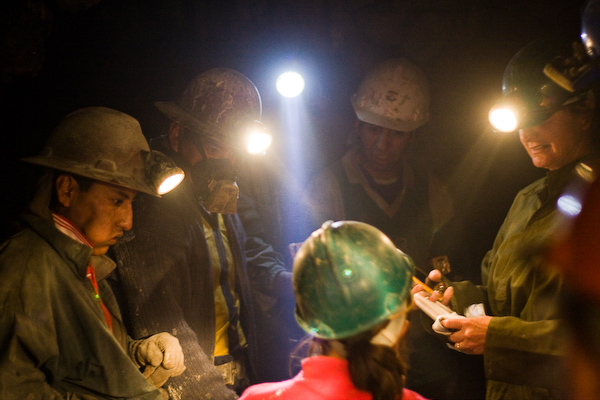 Handing over gifts in the darkness

We took a diversion on the way back and climbed up a rickety ladder and then walked over a narrow plank to enter another section of the mine. Here we saw a miner sorting through bags of ore, putting raw silver into small bags from a pile of rubble on the ground. We never actually saw anyone mining as such, any men we encountered were too busy asking us for things to be working. I guess we had an hour or so in the mine, it was interesting but not as enlightening as I thought it would be. Near the entrance we stopped by an effigy carved like a smiling devil out of the rock. Here miners gave offerings of alcohol, cigarettes and coca leaves in the hope that this would help keep them safe as they worked. 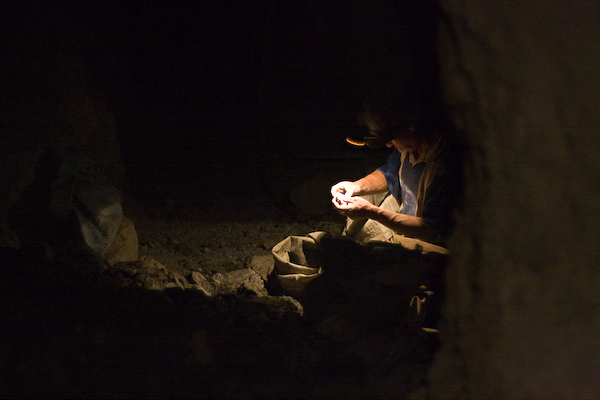 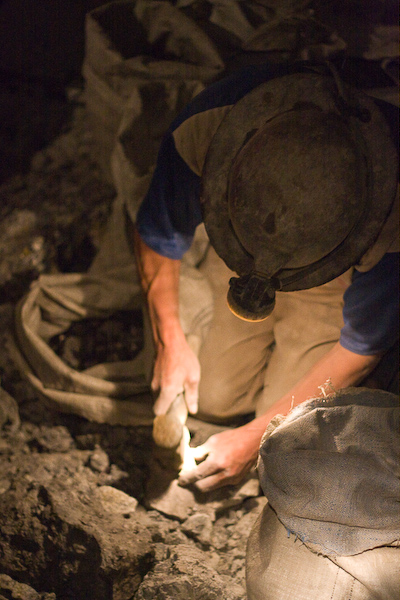 Extracting the best part of the stone 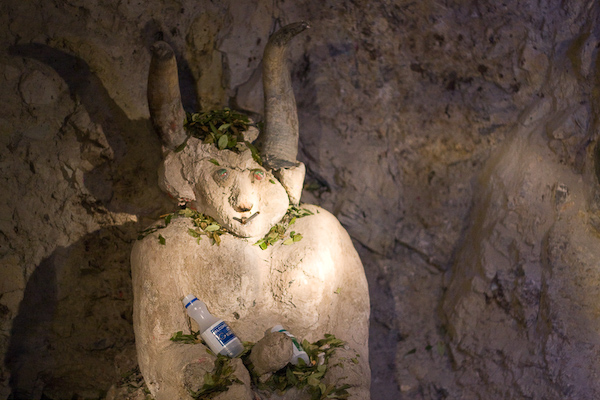 In the early decades of this mining operation, years ago when it was basically slave labour, over two million people died while working from the poor conditions; gas poisoning and explosions, accidents, cave ins and other mishaps. I guess things have improved but most of these men will still die quite young and the money made isn’t good at all. 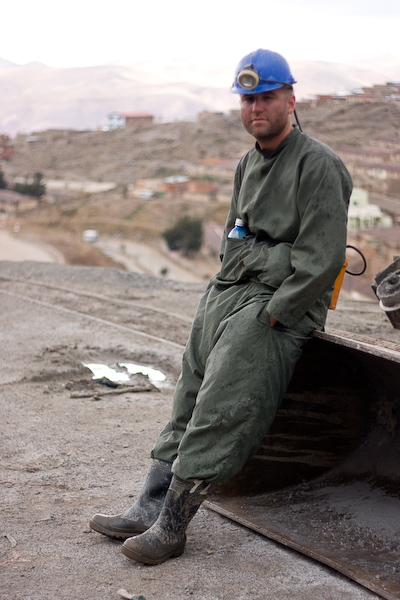 Mark outside at the end of the tour

Outside it was starting to rain so we rushed back to get changed and then were driven back to the Hotel. We had a simple dinner of chicken and chips, this was our last night in a Bolivian town so we had to make the most of our last chance to have this typical meal.