We were up and ready, waiting for our ride shortly after 4:30am. Unfortunately we didn’t realise our driver was sleeping by the hotel counter and he slept though our quiet walking so we headed off a little later than planned. This worked out OK and after getting our day passes we were soon walking the concourse at the entrance to Angkor Wat (by full-moonlight, it being an hour or so before dawn). 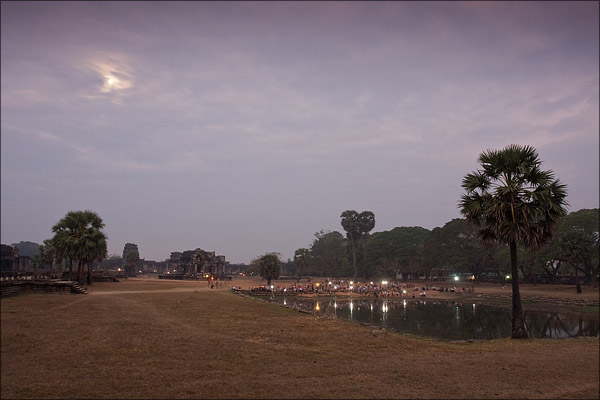 Photographers and their flashing cameras at Angkor Wat

We wandered around looking for a place to photograph the sunrise but the dry time of year meant the pools out the front of the temple were either completely dry or reduced to muddy ringed shallow water. Sunrise was a non-event as well with there being no real colour, just a gradual lightning of the sky. We still managed to get some nice photos and then wandered the temple complex with the few other people who had had the same idea of an early start. It was majestic and peaceful and there were many stunning sights, the sun even popping out from the low cloud to highlight carved reliefs and the tall towers. We spent a good few hours walking, watching and looking – taking photos and trying not to notice the oppressive humidity. Eventually we headed back to the concourse and sat down to have some breakfast. 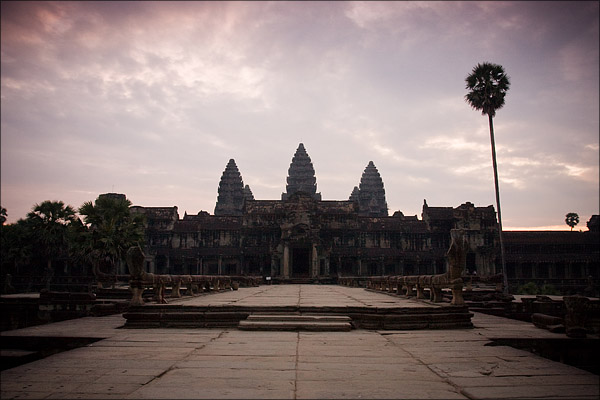 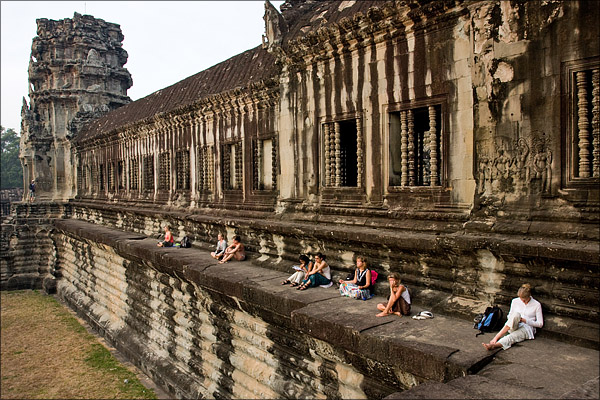 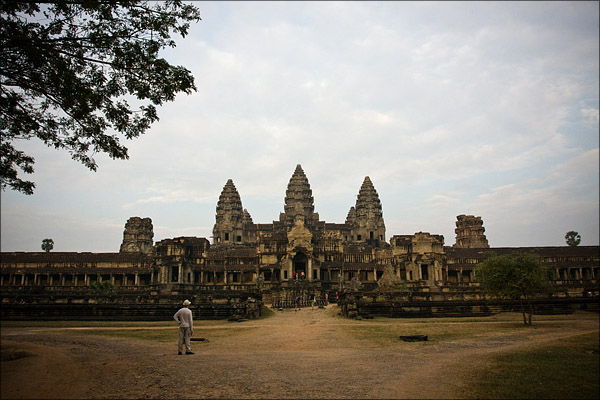 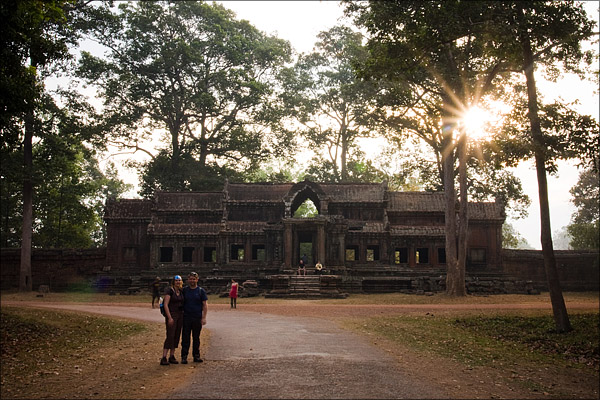 The building at the eastern end of the island

Having eaten we attempted to find our Tuk Tuk, a task that ended in failure. It was about an hour and a half before we were eventually picked up by Pete in the same bus we had recently seen ferrying our group to a neighbouring temple. We caught up with everyone else just as they were leaving the South gate of the Angkor Thom area and together we were all taken to the Bayon temple at the centre of Angkor Thom.

With what seemed like hundreds of other tourists we followed a well beaten path around the temple, punctuated by pieces of information given by our temple guide. It was an interesting temple with lots of giant carved faces, especially on the inner temple columns and towers. We also wandered along and saw a couple of other smaller temples and also walked past the Elephant Terrace, so named for the huge Elephant carvings running the length of the terrace. Having had a relaxing time at Angkor Wat it was a little jarring being hemmed in by crowds but we moved on to the next site, Ta Prohm, we seemed to leave most of the people behind. 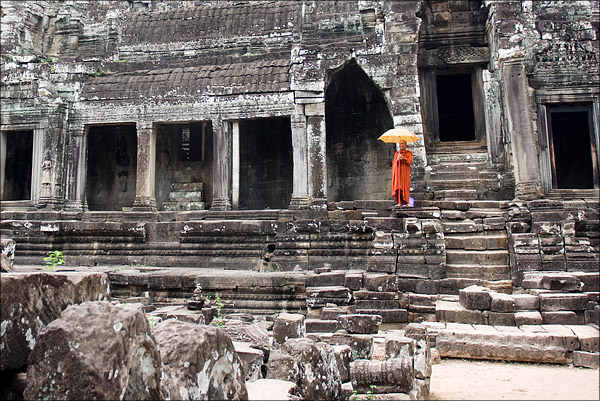 A monk at the Bayon Temple 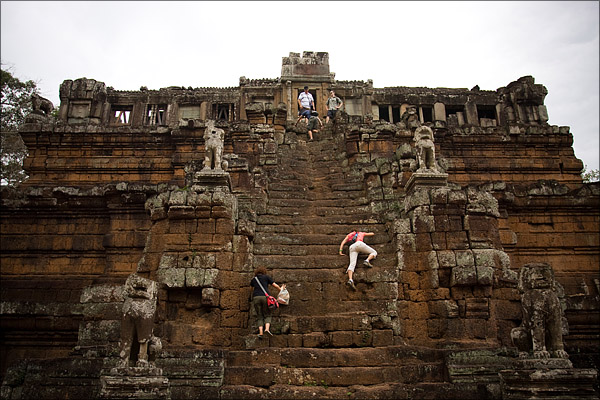 Climbing the steep stairs of a temple

Ta Prohm is one of the more well known temples, it has featured in a few movies, most notably the first Tomb Raider. The temple lay undisturbed for over 300 years and in this time fell to ruin and was partially taken over by the surrounding forest. The fallen walls were covered at times by the roots of large trees giving a number of impressive vistas, culminating in a building that was all but taken over by a large set of tree roots. This was our favourite temple; the atmosphere of dereliction was very engaging. 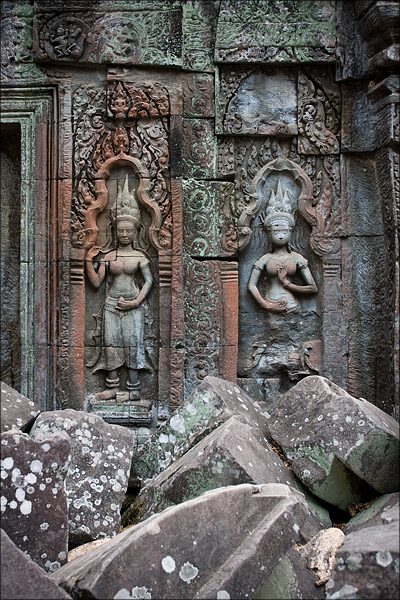 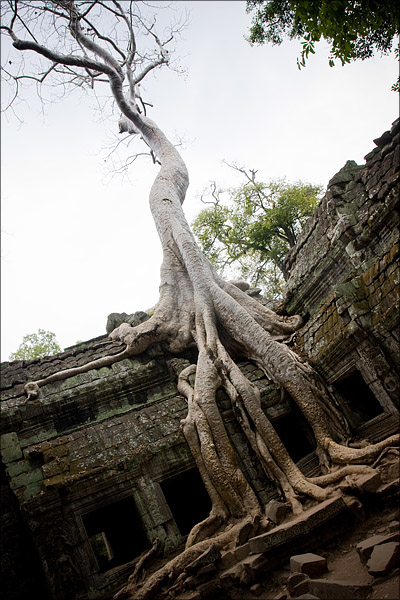 Moving on we drove back to the entrance to Angkor Wat and had lunch at one of the restaurants. After this Keryn and I were taken back to the hotel while the rest of the group looked around Angkor Wat. We had a quiet afternoon and in the evening we walked to the local markets and had a look around. The Old Market was shutting down for the evening so we wandered further to the Night Market. This market was very much set up for the tourist crowd and while everything seemed nice it lacked the bustling atmosphere of a market for the local people.

We ate dinner at the Red Piano restaurant on Pub Road. The road was pedestrianised and was lined with pubs and restaurants. As we were waiting for our meal to come there was a commotion on the street and a parade came past. There were lots of themed floats and groups of children chanting and singing as they held aloft such things as large glowing fish on sticks – giving the impression of a brightly coloured shoal going past. There was also a large mosquito puppet and also a large whale. It was all very entertaining and a nice diversion. Dinner was cheap and nice and once done we headed back to the Hotel for an early night, another early morning trip to the temples planned for the next day.