The next morning we all congregated in the hotel foyer at 7am and then started our journey towards the Cambodia border. We had two vans to transport us to the border, eight of us in each. Our van was very bling, the ceiling was an array of garish lights (thankfully not turned on) and there were golden mirrored panels and also a brightly coloured chrome gear stick. We had a comfortable if long four hour drive with a break for breakfast where those of us without Cambodian visas filled in the required application form. 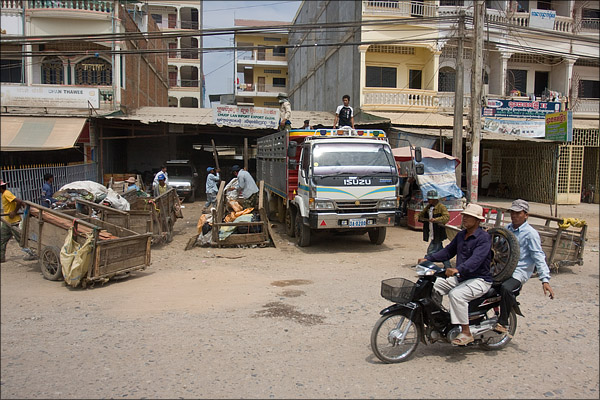 The roadside view on entering Cambodia

The border crossing was much like any other and didn’t take too long. We had lunch on the Thailand side and then walked through to the Thai exit and then on to the Cambodian entry point collecting stamps along the way. The Cambodian side was noticeably poorer than the Thai with buildings less tidy and much more dust on the road. The road itself quickly deteriorated as we came across miles of road works – a process that won’t be complete until 2010. The bus we had was a lot more basic than the van, no air conditioning, less leg room and a general feeling of well worn use. The bumpy road meant an uncomfortable drive in the heat of the day and after another four hours and a couple of stops we arrived in Siem Reap and our accommodation at the Victory Hotel. 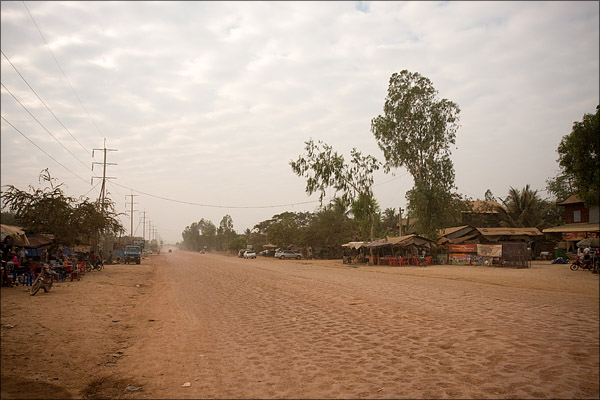 The road to Siem Reap

We were assigned rooms and after a short rest and much needed showers we headed out to a restaurant a short walk away for dinner. The food was at a higher standard than so far on the trip and as such cost a little more (our meal with drinks came to around $22 US) but thankfully tasted good as well. During dinner I arranged with Pete, our guide, for Keryn and I to have a Tuk Tuk the following morning so we could catch sunrise at Angkor Wat. The rest of the group would be heading out to the temples around 9am and we wanted to spend some time watching the sunrise and then walking around the complex before the bus loads of other tourists arrived. This meant a pick-up time of 4:45am so we made our way back to our room after dinner for an early night.