As a group we walked to the nearer of the two local ADO bus stations at a time too early in the morning. We had a lot of travelling to do today, about 11 hours in total, taking in a couple of buses, a bit more walking and a water taxi. It all went well.

The first bus took us near to the border with Belize where we got another bus, not as nice as the ADO but still with air-conditioning. There was a quick journey to the border where we had a very quick and easy border crossing and then we continued towards Belize City. After a few stops we arrived and the obvious difference was everyone spoke English, most with a Caribbean accent. The bus stop was a bit chaotic and somewhat run down but the people were very talkative and helpful. Taxis were arranged to take us to the water taxi building for the next part of the journey.

Belize City, the brief parts we saw, seemed old and tired. Buildings were, if not quite falling down, not looking too sturdy. The streets were narrow and dirty and it didn’t look like the nicest place to be walking around. Still, we only got to see the view from bus and taxi. Arriving at the boat house we sat while Josh arranged tickets and then were soon heading out to the boat. Our bags had already been loaded so we just had to sit inside the launch as we headed out to sea, our destination the island of Caye Caulker. It was hot up the front where we sat and it got worse when it started to rain, the hatches giving us a breeze being shut. The trip was about 45 minutes over mostly shallow water so at least we didn’t have to contend with much swell. We disembarked to a wet jetty to see the low buildings lining the island shore. Everything was a bit grey with looming cloud cover and drizzle as we walked a few hundred metres down the beach with our bags to our lodgings at Lena’s Place. Rooms were allocated, all much the same with a couple of beds and a fan. 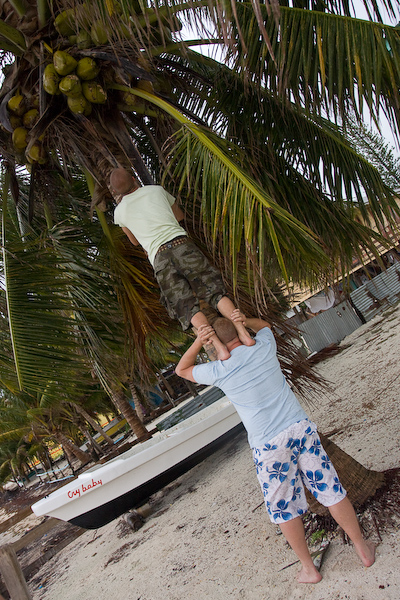 Matt helps Sam get a coconut 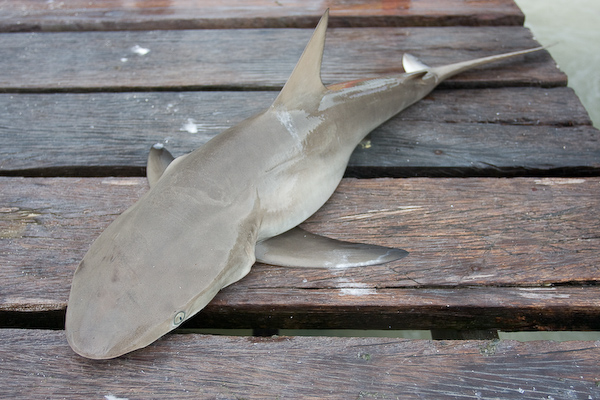 Sam and Mark took turns collecting coconuts, Sam attempting the harder task of picking a coconut from a tree outside the building. He was successful in the end after using various methods including Matt’s shoulders, a swinging spade and in the end traditional tree climbing. Some local fisherman were just down the beach on a jetty cleaning up their catch; Keryn and I watched as they cut steaks from a barracuda and investigated the small bull shark that had put aside. 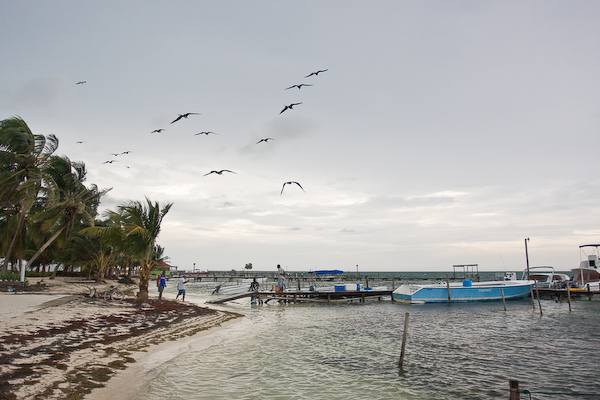 The view from the beach outside Lena’s Place

Josh took us on a quick tour of the town which was small but quaint and obviously geared towards the transient tourist population with lots of dive/snorkel shops and bars. Our destination was Raggamuffins Tours and after the sales pitch we all signed up for a full dayâ€™s snorkelling, hoping to see sharks and rays and manatees from our sailboat the next day.

After a few cocktails dinner was at a beachside BBQ called Jolly Roger’s. Roger obviously enjoyed his food, he was a very rotund man. On learning that it was Angie’s birthday he promised her a few extra drinks and also a dance (now of which arrived in the end). We did have a small slice of chocolate cake for desert which filled in for a birthday cake somewhat. The restaurant was nothing more than a lean-to with a corrugated iron roof hovering over some picnic tables. The menu was as simple as the building; chicken, fish or lobster with rice and mash. The lobster was by far the best choice given it was all the same price, those eating the chicken and fish were jealous. 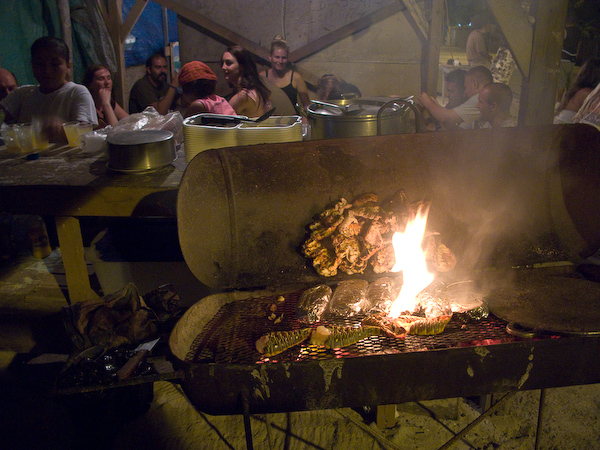 Back at the rooms we all sat and talked while the weather got worse. It was soon a heavy downpour which prevented most from going out, not that anyone minded after a tiring day. We had a bit of fun with a large crab that tried to escape from everyone into our room, luckily it dived straight into a plastic bag so was easily removed. A dog arrived from somewhere and decided to see out the rain with us, which was fine other than it smelling a bit. At one point Joe decided to get naked and do a rain dance. This was very successful, the rain came down even harder and we had to all evacuate the covered outdoor part of the building to escape the blustery weather. Sleep was the easy option for most after a long day travelling.