The mornings just seemed to be getting earlier and earlier. We had to be over at the Blue Angel dive shop on Cozumel so Keryn could do a refresher dive at 8am. Unfortunately there was no 7am ferry so we had to get the 6am departure so we were walking down from the hotel around 5:30am.

Other than me slipping down the boat ramp a little bit the journey over to Cozumel passed without incident. We had the same 3km walk we had undertaken the other day when first finding the Blue Angel and arrived about thirty minutes early for Keryn’s appointment. The same nice woman was at the office and we chatted to her while we waited for Keryn’s dive instructor to arrive and shortly before 8am Keryn was all kitted out and entering the water. I read my book and just relaxed for the forty minutes or so that Keryn was underwater. I watched a couple of fish hunting in the shallows, they would circle around and then jump out of the water to dive into the massed little fish from above.

All refreshed and reassured Keryn was out and we waited for the 10am dive departure. I was one of three snorkelers, the other two an English couple. There were ten divers and Keryn was partnered with Brandi, a funny woman we had been talking too at the dive shop. The boat was big and very nice, quite a change from our glass bottomed boat of a few days past. 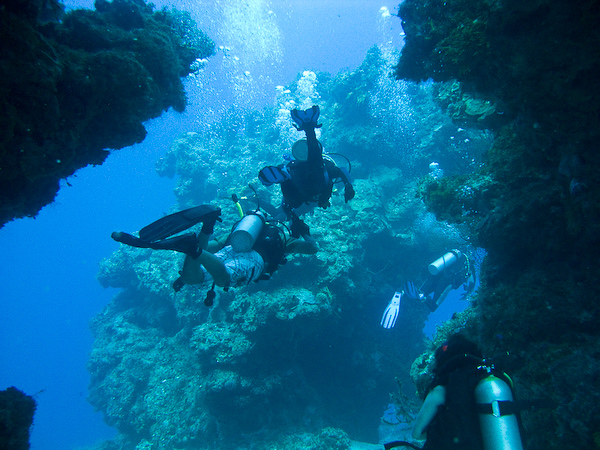 At each of the two stops the divers would get out first and then the boat would move a short distance and us snorkelers would get into the water following Sharky our guide. The first site was quite deep, we followed a coral reef running parallel to a shelf down to a deeper area where the divers were. Sharky was very good, pointing out fish and other features of the underwater landscape. The highlight was a turtle that Sharky chased for a short while, trying to get a photo with the English couples little disposable camera. We passed over the divers coming in towards the boat and it was a little strange swimming through their air bubbles. Keryn saw mainly formations and caves on this first dive. 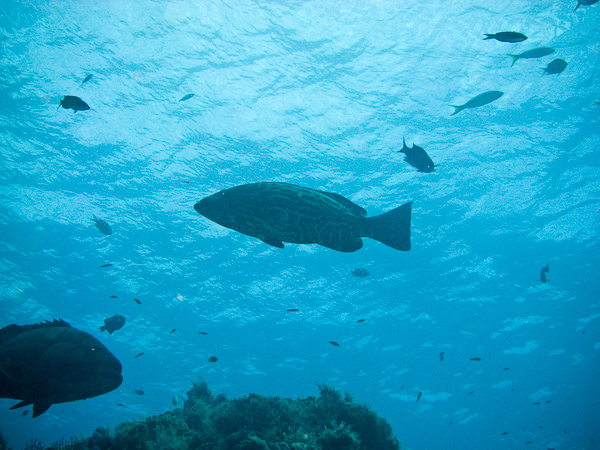 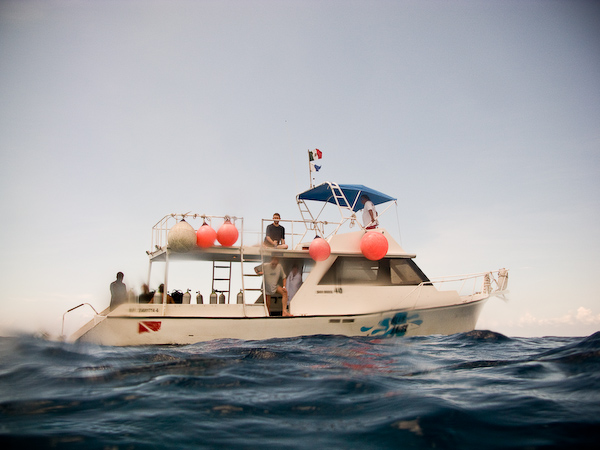 Waiting for the returning divers

The second dive/snorkel was at Paradise Reef; the same reef Keryn and I had snorkelled at on our previous visit. As last time there were loads of brightly coloured fish and Sharky was expert at getting them to come to his hands giving us following the chance to see the colours and variety up close. Sharky spotted an octopus and after giving us a close look he took it over to a nearby glass bottomed boat and entertained the passengers by placing the animal against the glass. We again saw the large school of fish being menaced by the barracuda – earlier we had watched a barracuda chase fish around our boat. Keryn got some good shots, the sun was shining, lighting up the seabed. It was a very good experience, the Blue Angel people were all nice and friendly as well as very professional. Saying our goodbyes we got a taxi back to town and sat for a while eating our packed lunch while waiting for the next ferry to Playa. 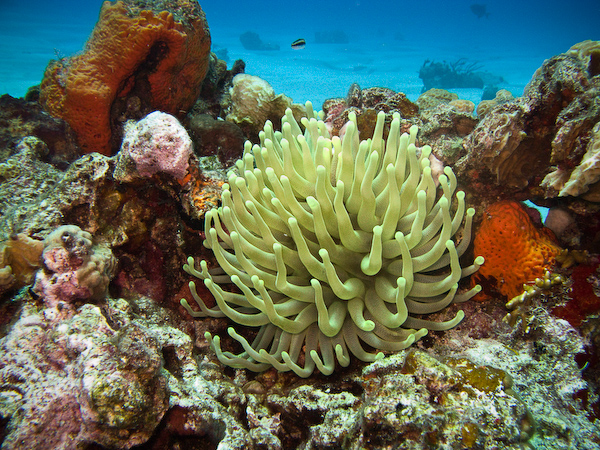 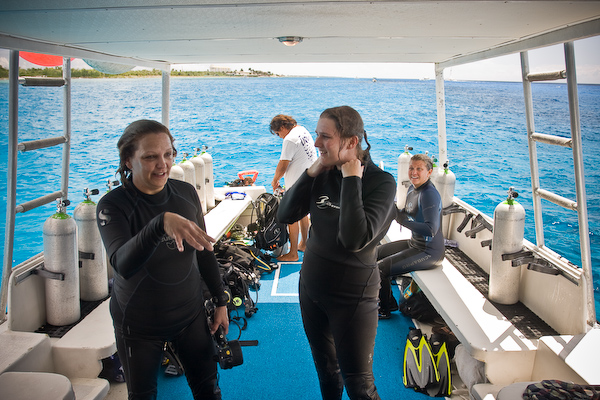 Brandi and Keryn after the second dive

After a rest we had the evening briefing and then headed out to the Chips place for a cheap meal. We then used up most of our remaining Mexican money at the supermarket and I got a large bottle of beer to drink while relaxing near the pool at the hotel. Most of the group ended up around a table and we sat and drank in a relaxed manner. Tash bought herself a birthday cake, it being her birthday, so we had a nice slice of chocolate cake each. Many of the group went into the town to see what was happening with the Mexican Independence Day celebrations, apparently some getting back to the Hotel not long before we had to get up for the next in our line of early starts. Being tired we took the easy option and went to bed instead.