With two full days in Granda we took this as a slow day where we would spend little money and just wander around the town. Setting out mid morning we walked away from the Parque Central towards Lago de Nicaragua. The most interesting thing we saw was a game of little league, both teams in their nice uniforms and for the young age of the players they seemed to take it all very seriously. The town got more run down the closer to the lake and the ferry terminal everything seemed to have been left to slowly decay, the buildings with peeling paint and somewhat overgrown vegetation. The long pier was closed to the public (except of ferry days I guess) and messages proclaiming no entry spray painted crudely on the gate. The water was dirty, flotsam on the beach and it just wasn’t pleasant. 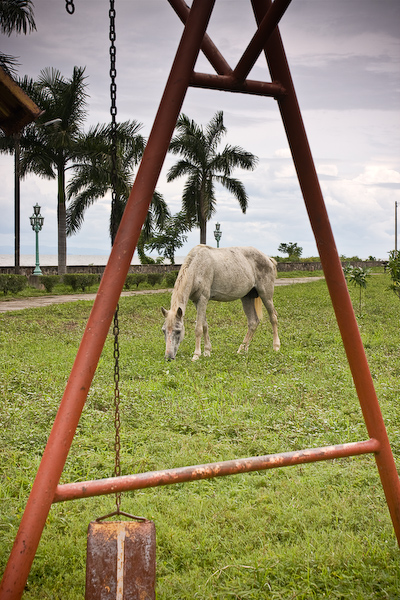 We walked along the park next to the lake shore. The grass was getting quite long and was mixed with all sorts of creeping vegetation. There was a playground, the swings broken and metal rusting, and the seesaws in a similar state of disrepair. A couple of sorry looking horses were cropping the grass, ignoring us as we walked by. Keryn chose a different street to walk back towards town but we were quite quickly turned around by a tourist police man on a motorcycle. He pulled up in front of us and with sign language (his helmet was still on) got me to put my camera away and informed us to walk back the way we had come. This morning walk wasn’t the best introduction to Granada. 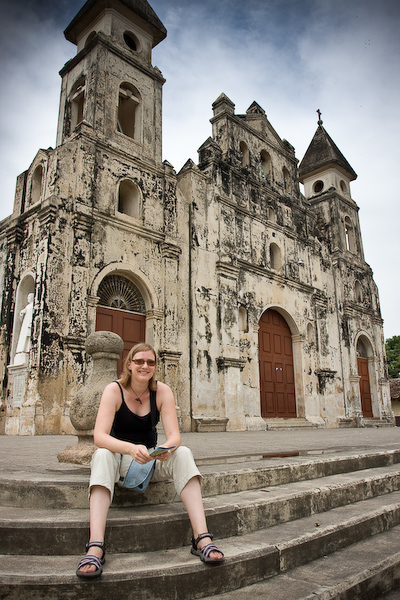 Keryn on the steps of Iglesia Guadalupe

We passed old church, white walls dirty and turning grey. I took a few photos of the Iglesia Guadalupe and then we headed back to the hotel. Our last encounter was with an old man who wanted some money. When I ignored him he stepped towards me and slapped the back of my shoulder and proceeded to berate me loudly. We walked on.

Reaching the hotel we took a rest in the lobby. Cecylia came back from a walking tour she and a few others had taken and we quizzed her for a few other places to visit. Hoping for a more pleasant second part to our day we headed into the center of the city. 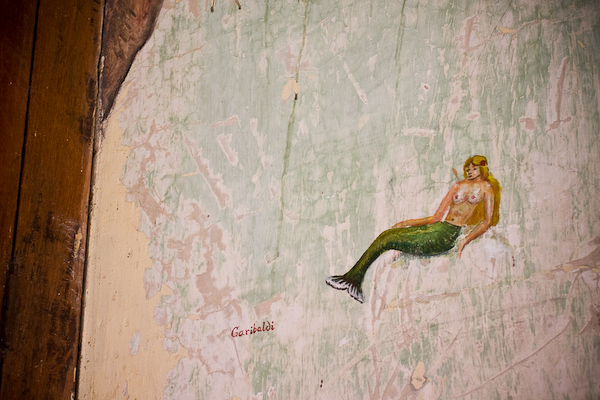 A mermaid on the wall of Convento de San Francisco 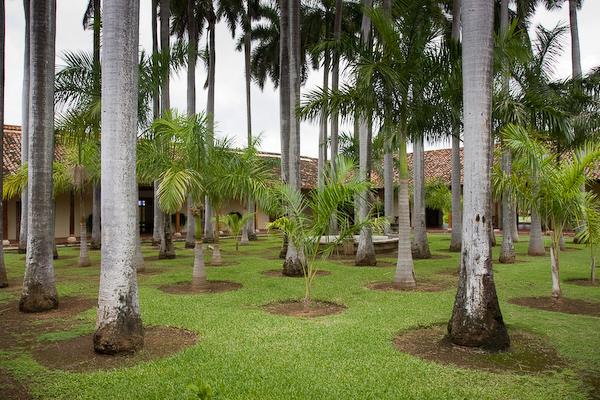 Our first stop was at the Convento de San Francisco. Inside the old colonial building a small museum had been set up and we walked past a mural giving the history of Nicaragua from the first recorded native settlements to Spanish colonisation and on to today. Quite randomly there was a mermaid painted on the wall, maybe the signature of the artist. The inner courtyard was planted with large palm trees and the whole place was calm and cool, quite a change from the mornings decay and heat. Each room off the courtyard had a different display, large stone carvings from the pre-Columbus era, pottery, examples of native games, wooden carvings of saints and angels. We spent a peaceful half hour looking at everything before heading out once more. 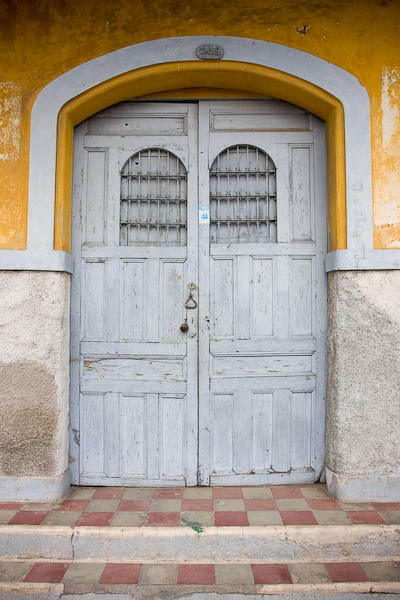 Old doors on the streets of Granada

Lunch was had near the square and we bumped into Sam and his mate Jim as we were heading off to the next site of interest. I haven’t mentioned Jim before (strangely); he joined us way back in Flores on the previous segment of the GAP trip, paying his own way to follow our tour. Sam and Jim had been making their way independently through Honduras and Nicaragua but their path was pretty much the same as our own so we often saw them in towns and cities we stayed in. We chatted to them for a bit, they had only just arrived in Granada, and then headed on to Iglesia La Merceo.

We visited this church specifically because it was a bell tower that can be climbed for views over Granada. Arriving outside the church a man waved us over and after establishing that we wanted to walk the steps for the view he led us over to the locked gate that opened to the stairs. The man didn’t seem to be an official church person, he had a mild form of muscular dystrophy and spoke in a slurred manner but was friendly and seemed trustworthy. Seeing the locked gate he rustled up the woman with the key. We paid the small fee and headed up the narrow concrete staircase to the top of the bell tower. 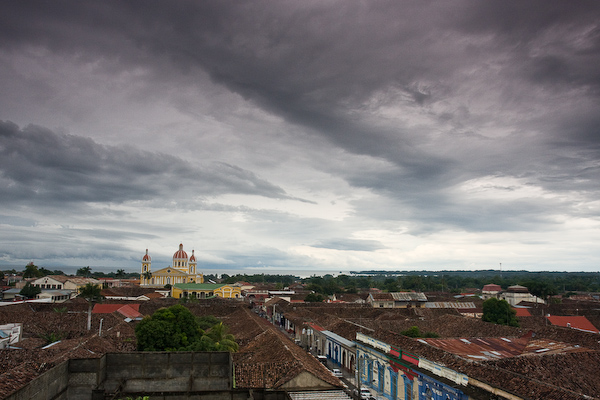 The view from the bell tower of Iglesia La Merceo 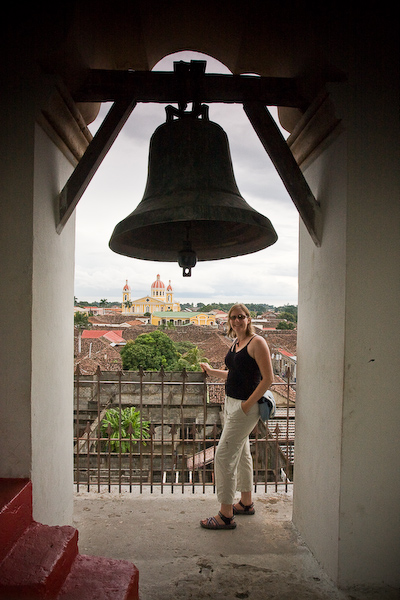 Keryn in the bell tower 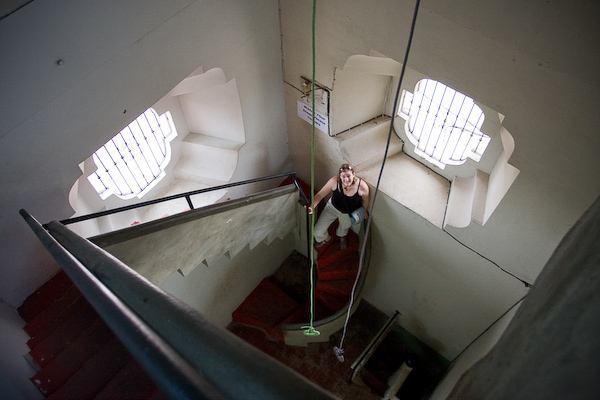 Taking the stairs down

We spent a while looking out over the city and towards the distant volcanoes and lake. Granada looked nice from on high, the terracotta tiles of the rooftops attractive under the grey sky. Once we’d taken all the photos we could manage it was back downstairs and on to the hotel, stopping to pick up laundry on the way. The second part of the day had been much better than the first. We had dinner at a pizza place very close to the hotel and followed it up with good ice cream. Tomorrow we had a full day tour of the area around Granada booked so we headed to the hotel rather than stay out late over drinks.