We left Honduras today and entered Nicaragua. This involved four different buses and two sets of taxis and went kind of like what follows. The group split on leaving the hotel, three taking the more expensive option of an air conditioned luxury bus all the way from Tegucigalpa to Granada, leaving by taxi to get to their bus station. The rest of us took taxis to a different bus station where we waited for an hour or so for us first bus to depart. This bus took around two hours to get to the border with Nicaragua, it was meant to take over three hours but our driver was a madman. 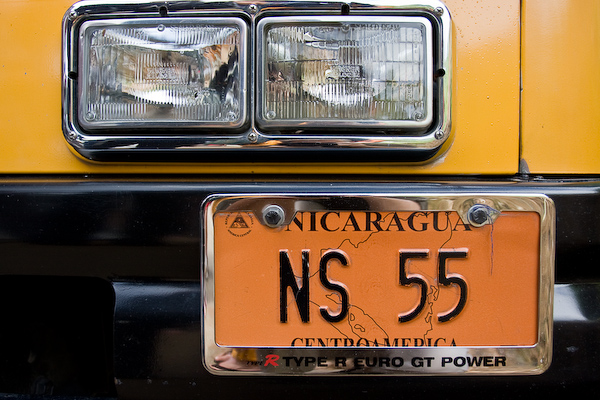 At the border things were going smoothly until Josh asked for our passports to be stamped (a number of Central American countries have banded together, you get one entrance stamp that covers all of them normally). The border official took umbrage to this request and suddenly we all had forms to fill out. Josh himself was given the third degree, all as punishment for a simple request. Don’t mess with border officials in the lesson. We had all got onto a yellow school bus for our next section of journey when the border officials appeared again and Josh was asked to get off the bus and his passport was inspected again. They didn’t find anything they could pull him up on so after a five minute wait we were allowed to go on our way. 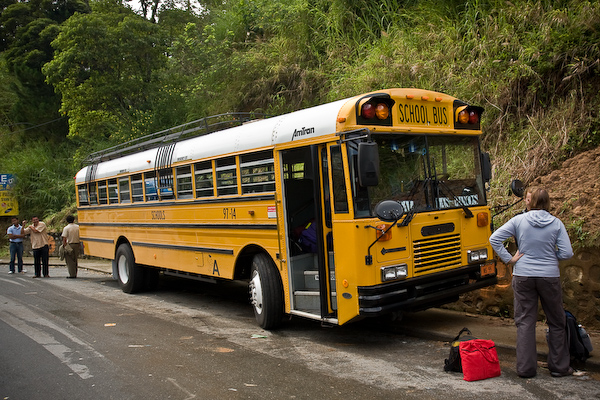 The school bus was one of the often talked about chicken buses; a bus that used to take kids to school in America that now takes many more people from a to b in Central America. We had a kind of chicken bus light experience, the bus never really got that packed and there were no chickens. It was only a short journey anyway, after an hour we arrived at the next town to transfer to another bus that would take us to Managua.

We thought we had ten minutes but the next bus started pulling out pretty much as soon as our bags had been transferred so Josh had to run around collecting up those who had gone to find food or toilets. This bus carried us for another three hours or so, with regular mini-buses making the journey from Managua to Granada we did have time at the next bus station for a bite to eat and a toilet stop.

In Managua once everyone was ready we got in taxis and headed across town to a different bus stop where we boarded a mini-bus for the final hour to Granada. This bus soon got very full, and then more full until we were packed to the brim with people. The last hour was probably the most uncomfortable of the whole days travel. We were relieved when the mini-bus pulled up outside our hotel in Granada.

The hotel looked nice but the room were tiny. Once our bags were on the floor we barely had room to move around the bed. Still, the bed itself was comfortable and we don’t go on these trips to spend much time in our rooms if we can help it (other than to sleep of course). Dinner was had at a nice Mexican restaurant a short walk up the main street from the hotel. After two days of bus journeys the nightâ€™s sleep was gratefully taken.

One thought on “Day 36 : Tegucigalpa to Granada”