A long driving day became slightly less painful by the generosity of the bus company. First up was a five hour drive in a slightly old but comfortable bus. One stop was had at a roadside cafe, otherwise the drive nice and easy. Reaching the hive of activity that was Guatemala City we got off at the bus station and transferred to a large mini-bus for the hour drive on to Antiqua. The mini-bus was offered by the bus company and this was the first time this option had appeared according to Josh. Driving out of the city seemed to take a long time, back on roads filled with traffic. Winding through hills and valleys we eventually arrived onto the cobbled streets of Antiqua, passing between brightly coloured little houses and businesses as Josh directed the driver to our Hotel.

Of the colonial style cities we have seem so far Antiqua seems to have the best mix of location and beauty. The streets were all cobbled as already mentioned. A few volcanoes could be seen rising above the horizon, Volcán de Aqua to the south the most prominent. The buildings for the most part were in good repair, the exceptions being those still in ruin, damaged by earthquakes in the past. The general air was pleasant, street hawkers and beggars to a minimum. The shops and restaurants also were of a higher quality than many towns seen so far. 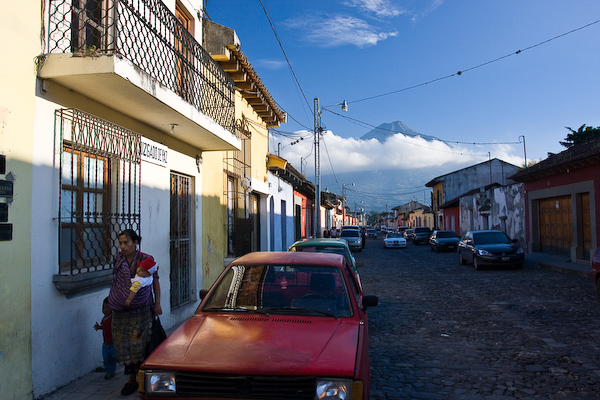 The hotel, Los Bucaros, was good. Spacious rooms were tastefully decorated and the hotel itself was presented well with many wooden features and a small fountain in the reception. Keryn and I took a walk into town towards the Parque Central, checking out a few cafes on the way. At the Church La Merced we saw fireworks being lit, the first taking us by surprise as it exploded noisily skyward. The man lighting the fireworks was very friendly and got me to take a couple of photos as he prepared the next one (the photos didn’t come out that well). Moving on from the church we passed a large part of the rest of the group in Riley’s Bar, an Irish pub, as we were heading to get a photograph of the Santa Catalina Arch. The arch is all that remains of a convent founded in 1609, the rest of the building destroyed in subsequent 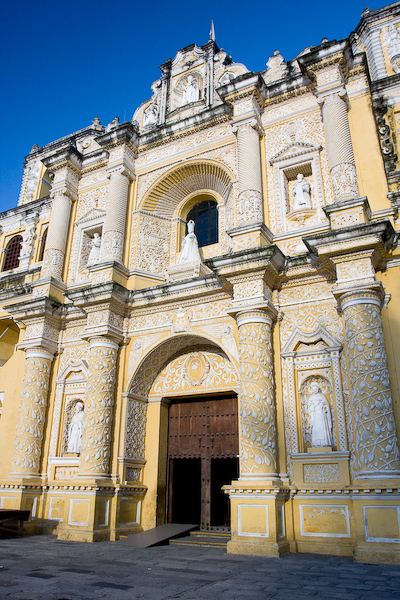 The intricate facade of La Merced 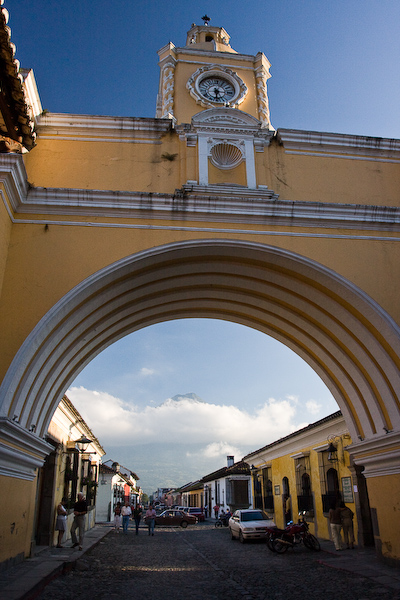 We shared a slice of wonderfully moist chocolate cake and a glass of lemonada con soda (which is our usual drink when not having alcohol as it’s cheap, tasty and usually comes in a large glass making for good value) as a semi-birthday treat. Back at Riley’s Bar Keryn was treated to a rowdy rendition of Happy Birthday before drinks her taken in her name. The tequila bombs, a row of tequila shots dropped into glasses half filled with Dr Pepper and beer, were quite tasty (I drank Keryn’s with her not liking beer). Then it was back to the hotel to get a dinner recommendation from Josh, we’d decided to leave the group this night and have a nice meal by ourselves. 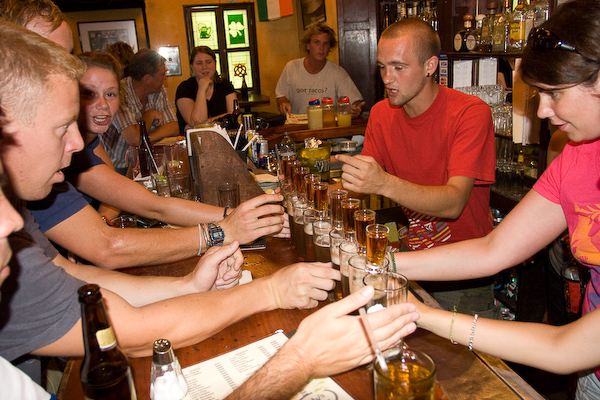 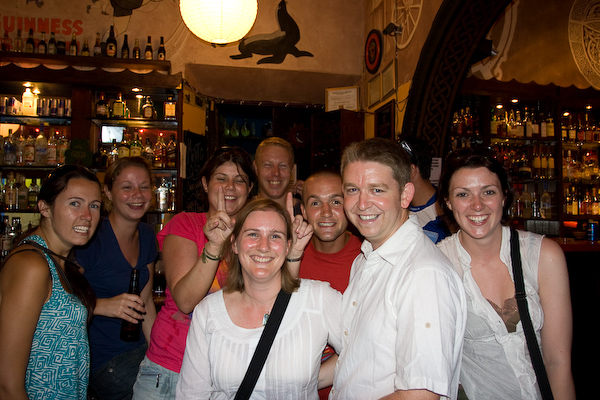 Las Palmas was the chosen restaurant and the food and service was top notch. We both had steak, Keryn having a nice thick rump piece and I the thinner but just as tasty fillet. There were only a few other people in the restaurant so we took our time enjoying the food and drink. We did have to rush through desert when we realised we’d have to pick up our laundry before 8pm.

We picked up the laundry and then headed back to the hotel. A wild night was had by those out drinking, motorcycle rides and bar dancing featuring apparently.