We headed out onto the river today, checking out the start of the nearby lake before heading downriver towards the Caribbean town of Livingston. Actually the first stop was at a river side service station to get some petrol, but that wasn’t particularly interesting. Upriver to the start of the lake we slowly moved around the Spanish Fort sitting on a little peninsula, looking at the myriad cannons and the local guy using a snorkel and mask to hunt for fish in the shallows. Turning around we stopped a few times to look at rousting birds; pelicans, cormorants and egrets. There was a little island of vegetation in the middle of the river that mad cormorants and their newly hatched young.

The boat then picked up speed and we raced downriver, through a wider stretch that obviously didn’t have much to recommend other than the view over the water to the distant green hills. We passed the odd little canoe with either one or two people paddling or fishing. Just when the trip was getting boring we slowed down, coming to a part of the river where an inlet had formed. There were large mats of lily pads, white flowers pointing to the sky. 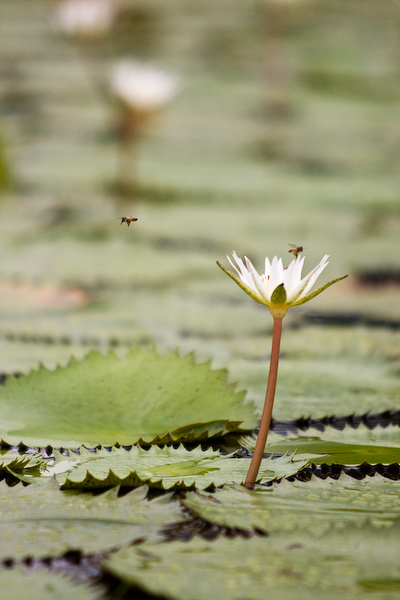 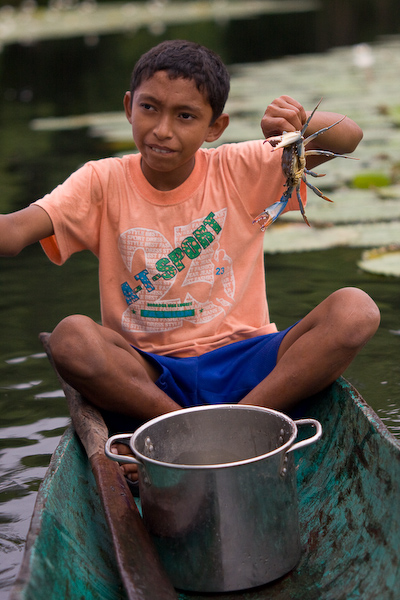 The young man with his crab

Slowly we coasted around the inlet looking at the lily pads and the mangroves in the background. Features appeared as we looked around, bees landing in flower heads, long toes birds picking their way over the lily pads looking for food. A small boy appeared in a canoe (this happens all over the world, people appearing out of nowhere) and showed us the crab he had recently caught. Once he wasn’t interesting anymore we moved around to the far side of the lagoon to a house which turned out to be a local store. 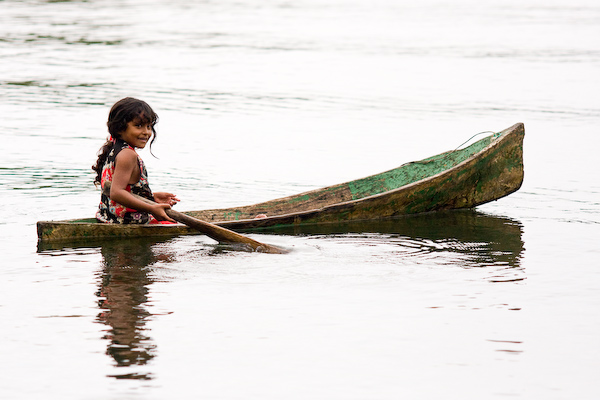 Some bought coconuts, most just had a look around. A young girl was following her mother through the inlet and she was impishly cute, paddling constantly back just to have a look at us all. Some of the guys bought her and the young man from earlier a couple of little gifts, food I think. In the distance on the river I watched a couple of guys in a canoe getting closer. They were fishing, the man standing in the front pulling in his net before winding it over his arms, checking all was OK before flinging in out into the river. Each time the net unravelled into what seemed an impossibly large area. 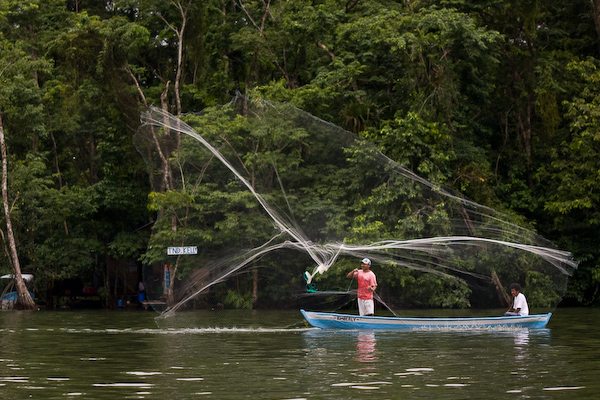 Further down river the boat took a diversion down a tributary and we docked at a local craft collective. Shopping was done and we took the five minute walk to see some large rapids labelled as a waterfall. Sam was the only one brave enough to tackle the water and had a quick ride on the waves, plunging down the fast flowing stream. On the walk back to the boat we stopped to look at a huge locust sitting on a path side plant. It was about four inches long but thankfully quite placid in the cool air. 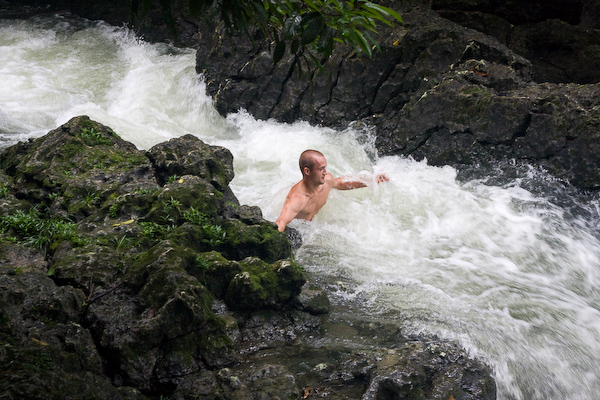 Sam goes for a ride 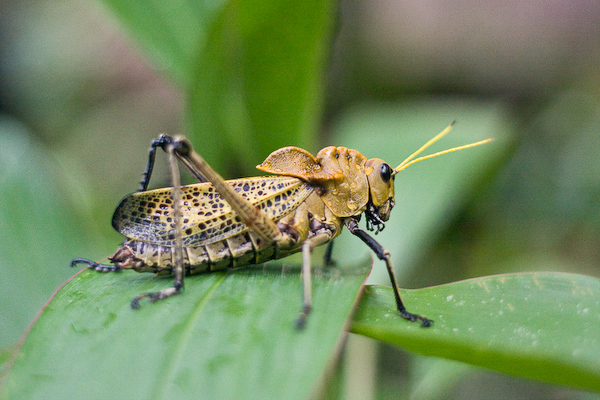 The journey continued and we arrived in the sea side town of Livingston. There was a Caribbean feel to the place, once more laid back and colourful. We ate at a local restaurant (and tour agency) called Happy Fish, many having the speciality of tapado, a coconut based fish soup that contained a whole crab, fish and a number of prawns. While eating Josh and Mark were convinced that they should have their hair braided by very persistent local ladies. The end results were mixed, Josh looking a little ridiculous really while Mark’s hair was OK in a surfy, bohemian kind of way. 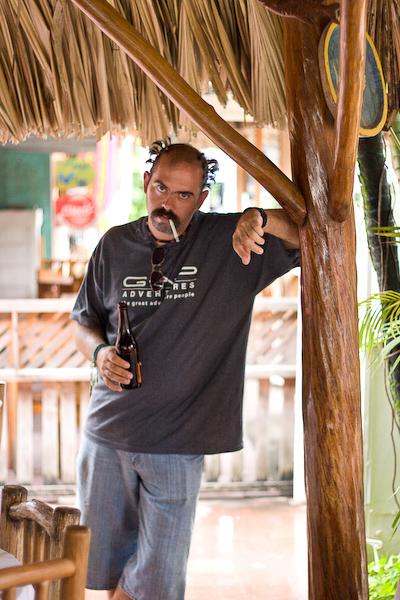 Josh with his hair done 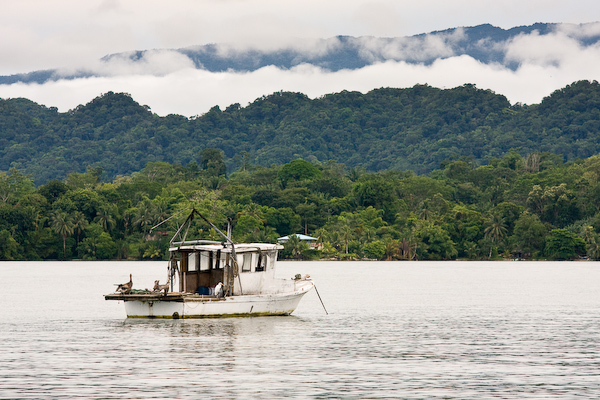 Looking from the Livingston dock

After lunch and a quick wander down the main street and into a few shops it was back to the boat for the trip back to the hotel. One more stop was taken at some riverside hot springs, most of the group taking a dip in the walled pool constructed around the underwater springs. An evening of relaxation followed dinner. 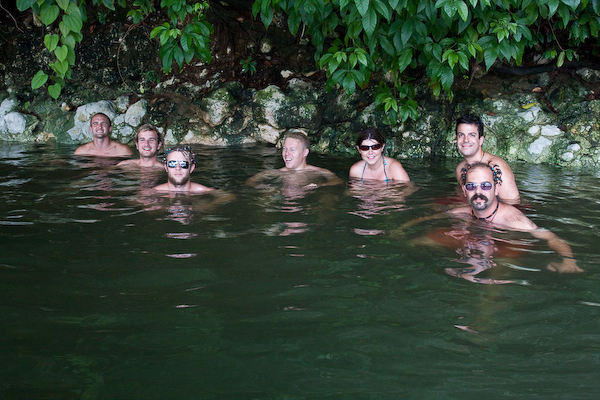 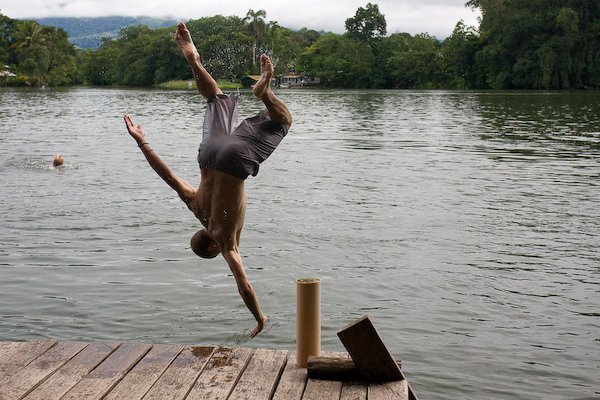 Sam flipping into the river

Again we were treated to a night of heavy rain and thunder. It was obvious that the river was rising each day, we’d get up and the boardwalk would be closer to the water. Still, it was easier to sleep this time without the enclosure of the mosquito net keeping in the heat.