The tour organised for today started at 10am so we had a bit of a sleep in. Breakfast was the usual rolls with jam and a banana. We had a packed lunch for the tour as well, all this food having been purchased the day before or, in the case of the jam, in Mexico City. Come 10am we were in reception with the rest of the group ready for our day trip (except Mark, sleeping off the excess of the evening before). The guide for the day was named Ivan and he turned out to be probably the best guide we’ve ever had being eloquent, polite, supremely knowledgeable and very affable as well. Because this was a private tour – just the fifteen of us, out driver and Ivan – we were able to take things at a pace that suited the group so we never felt rushed or conversely pressed for time.

In the new Mercedes van we were first driven to the town of Santa Maria Del Tule. The principal attraction here was a very large tree, the Árbor Del Tule; around 58m in circumference and weighing around 500 tonnes. The tree is several thousand years old and was an impressive sight, standing out in the quiet and quaint town. After a brief wander around we were driven off to the next tour attraction, the ruins of Mitla. 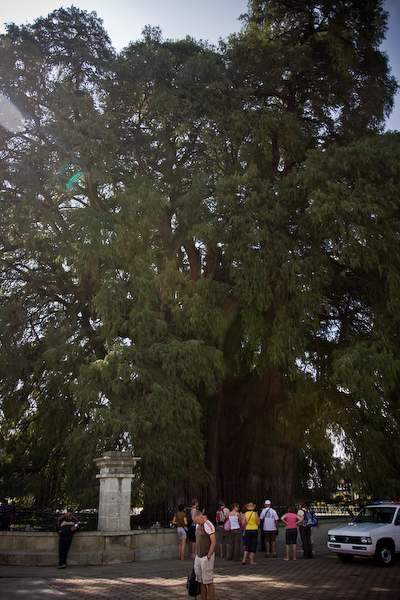 Not a huge site and without the impressive pyramids we had seen elsewhere the Mitla ruins were initially underwhelming. The unique feature of the site is the impressively designed and rendered mosaic covering of the main building still standing; the Templo de las Columnas. The walls have geometric designs laid out with precision and the effort and skill used to construct the building is impressive. We were guided around the site and led into the building and Ivan explained some of the designs such as a stepped mosaic that represents the journey from birth to death. We were almost alone of the site and there was plenty of time to wander around and take in the whole site. There also seemed to be a lot of long tailed lizards populating the area, scampering away as we walked around. 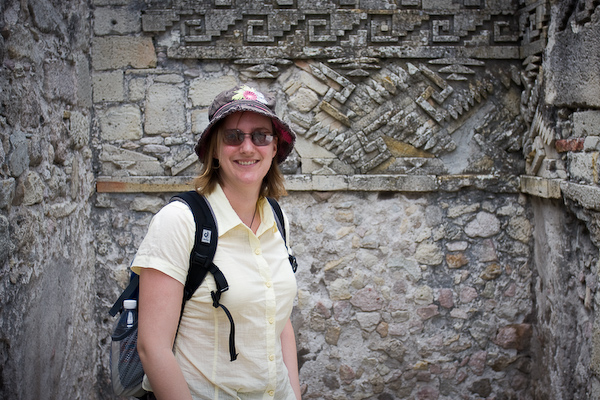 Pat is an artist, always travelling with his sketchbook. Here he is drawing the faÃ§ade of the Templo de las Columnas

There was a small market adjacent to the ruins but we must have been early as many of the stands were closed up. A Church stood above the ruins and it was possible to see how it had been built on top of an ancient building, low walls with more mosaic construction around the Church. Keryn and I had lunch in the Church courtyard, peaceful in the shade of a tree.

Heading off we passed through the town of Mitla, seeing the small motorised tuk tuk like vehicles navigating the narrow streets. The buildings were largely run down but colourful, many shops for local textiles and clothing. After a drive of twenty minutes or so we came to the next stop, a locally owned rug shop outside the town of TeotitlÃ¡n del Valle.

Here we were shown the wool making and then rug making process. The brightly coloured rugs we would be shown were all dyed using natural colours, the source being lichens for the yellows, cochineal bugs for the red, indigo plants for the blues and a combination of the above plus other ingredients like lime juice and pomegranate to make the colours in between. With these ingredients and the natural white through black of the undyed wool over one hundred individual colours could be produced. Pat volunteered to try the wool scouring and Ben got up to volunteer for a demonstration of the colours possible to be made using cochineal; a live bug from one of the cactus outside was squashed in his palm to generate a vivid red (the colour coming from the minerals the parasitic larvae absorbs from the host cactus). The colour was then changed to orange and purple through the addition of other ingredients. Ben added humour to the presentation by painting his own face with each of the different colours. 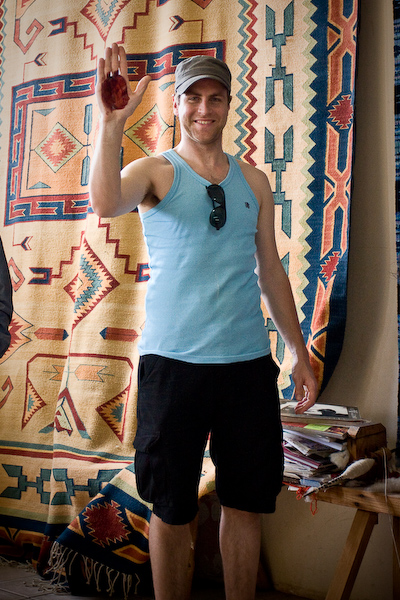 We were then shown a rug being constructed on a large loom, large and intricate designs taking months to put together. Finally we were shown different rug designs in a number of sizes and then got down to the business of deciding if we wanted to buy anything. We settled on a small rug with a Zapotec diamond design in the centre and the stepped life design in bands across the top and bottom. Others bought other pieces in various sizes as well. Unlike other countries we’ve been to, Turkey and Morocco specifically, there was no bargaining here. The price given might was it (normally there was a first price and then a slightly discounted price to reel you in). The quality here was good and the family members showing us the demonstrations and then selling the carpets were friendly and not at all pushy so it was a pleasant experience.

The final stop was at a Mescal distillery and shop. Ivan explained the process; the heart of a mature Maquey plant is cut out and then cooked in a pit fire over a few days. The cooked plant is then squeezed to obtain a sweet juice and this is distilled to make the Mescal, all in all a fairly quick process. We tried a few different kinds of Mescal from straight out of the distillery to aged liquid that was smoother and finally Mescal liquor mixed with fruit juice or other liquids (coffee, milk etc) to make milder drinks. 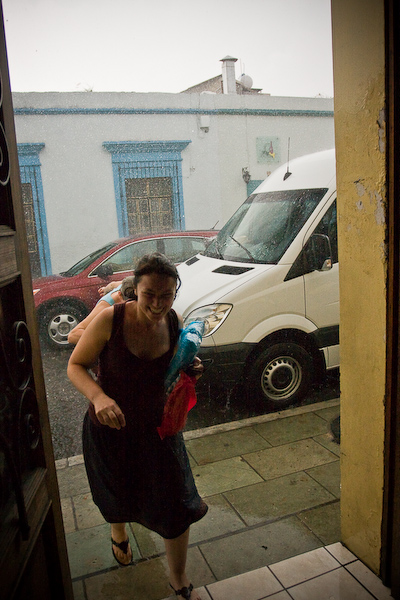 Lisa running inside to escape the downpour

On the drive back to Oaxaca the rain started coming down and soon we had a downpour on our hands. This continued as we entered the city and by the time we pulled up at the hotel the street was nearly awash. It was a mad dash from the van to the hotel lobby and there we watched the rain. After another ten minutes the street was a fast running stream, the volume of water was incredible. It rained for another half hour or so and after this the water quickly drained away. 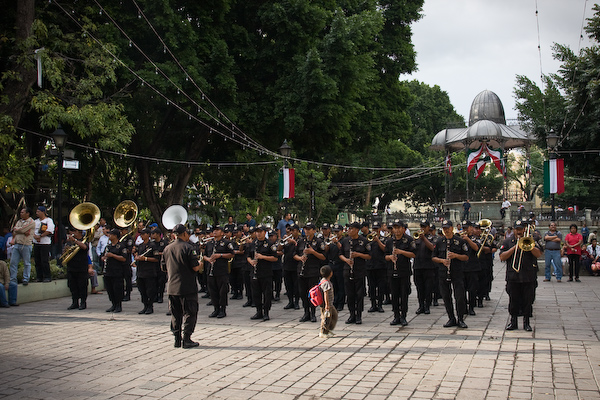 The army band and a curious child in the ZÃ³calo 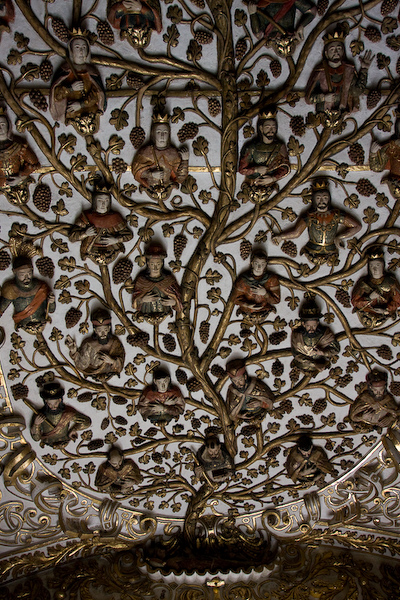 The entrance ceiling at Santo Domingo 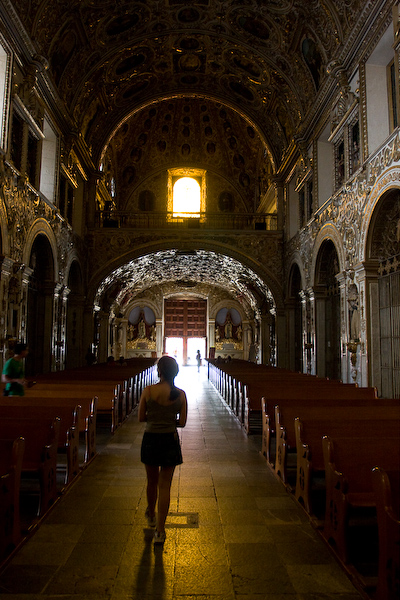 We walked up past the Zócalo and visited the Santo Domingo church in the late afternoon. The interior of this church was amazing, intricately detailed and the entrance roof was covered in a huge tree of life design with what looked like a family tree being described with carved people at branches on the tree. The simple lighting inside (mostly just natural light) made it gloomy but also more mysterious. Coming back Keryn was getting hungry and we came across Paul, Debbie, Terry and Sue at a restaurant so we joined them for dinner. The food was good if slightly expensive and we had the accompaniment of a couple of different musical entertainers (though the first group, sax and guitar, weren’t very good). The rain came down again as we finished our meals and we ended up walking back to the hotel in a steady downpour. We closed the windows in the room this night to ensure a better nights sleep.