Breakfast was provided at 6:30am so we could be on the road just before 7am waiting for the bus to Manzanillo for our walk in the Refugio Grandoca-Manzanillo. We arrived around 7:15am and sat down where the bus dropped us off waiting for Omar, our guide. A woman approached us and told us that she was Omar’s wife and that he would be along shortly. Sure enough a dreadlocked man soon turned up and told us that we were actually a bit early. There was some confusion with times and he had another group of people turning up at 8am so we’d be setting off when they arrived. Unfortunately it didn’t quite work out that way, the four Germans arrived late and promptly went to a restaurant for some breakfast. While waiting for them to visit an American man and his wife arrived and managed to attach themselves to our tour as well. What we had thought would be a small group (just us two maybe) was now eight people and in the end we didn’t start the walk till 8:30am. We weren’t best impressed. 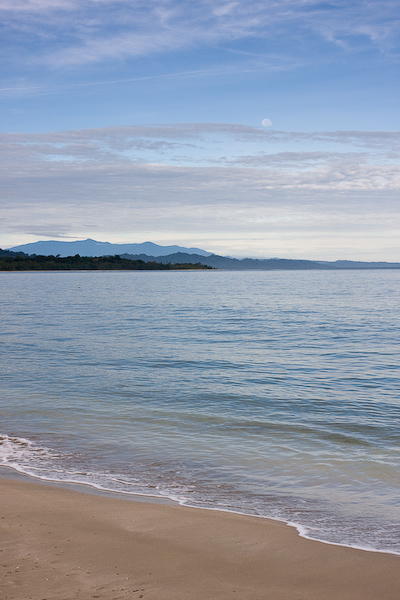 The morning view from Manzanillo

Anyway, at least we were now walking. Omar was a good guide, clear and informative and also fond of a joke or two. We walked from the town along the beach road and he explained how the land had risen up during an earthquake in 1991 pushing the ocean back some distance. The different levels could be seen, less mature palms and other plants on the lower ground by the beach. The first animal spotted was a brown basilisk running and hiding under a pile of dead palm fronds. We crossed a stream where it entered the ocean and entered the jungle, following the line of the beach. There were houses here though not many, nothing allowed to be built since the reserve was established. Joggers were running past as we stopped to observe a vigorously scratching three toed sloth high up in a tree by the path. 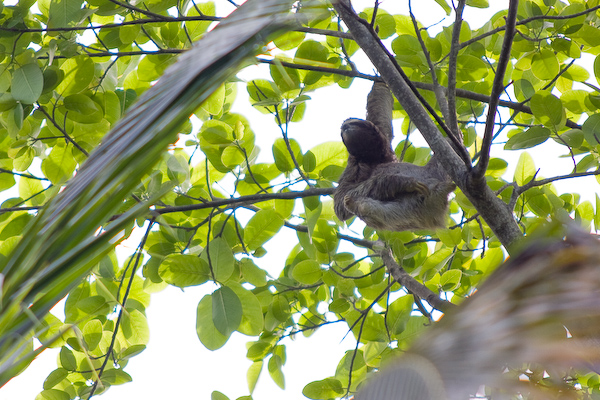 Moving on we walked past a tree with pale, fleshy looking fruit. The juice of the fruit smelt absolutely terrible, apparently the fruit is used in many medicines and even as a blue cheese replacement (it smelt like blue cheese, really strong blue cheese). Heading away from the beach and the houses we took a path into the thicker jungle and passed a bright yellow eye lash viper curled up on leaf. These little guys come in all sorts of different colours and this one had got his location a bit wrong, any passing predator would have spotted him instantly. Still, it made for a good photo. We saw another eye lash viper later on in the trip, a larger brown specimen on a tree truck much more camouflaged. Eye lash vipers get their name from the little ridges over their eyes. 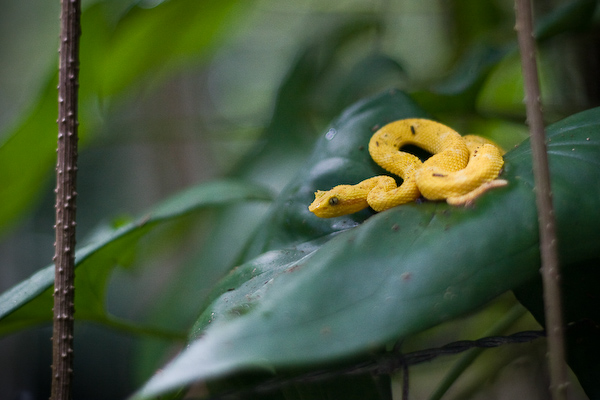 Coiled and waiting for dinner to come by

The next animal was an amphibian, a tiny little red poison dart frog. There were actually three or four in the same area, all hoping away into cover as we approached. We also saw some drabber looking leaf litter frogs, brown and mottled white hiding in the mulch. Nearby I saw a tiny lizard perched on a leaf and munching on an even smaller bug but sitting still long enough for one photo. 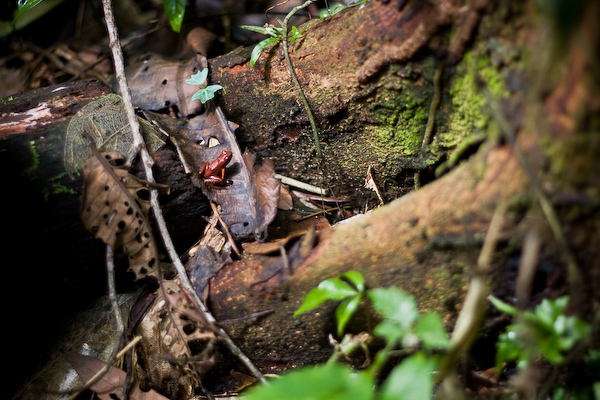 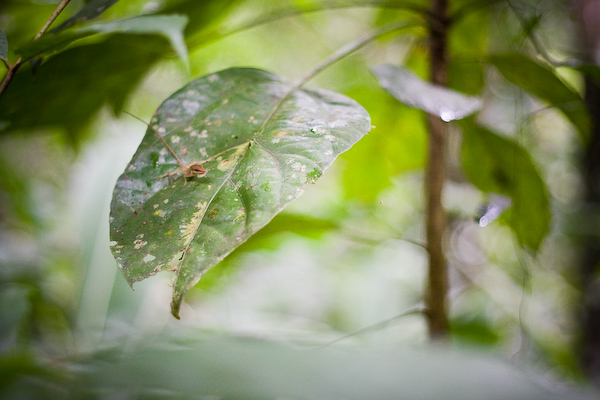 The forest was full of the sounds of life, frogs and cicadas, birds and howler monkeys. We didn’t actually see many birds on the walk other than fleeting glimpses of toucans and fly catchers through the jungle canopy. There were plenty of interesting trees and plants, bright red and yellow flowers and fruit appearing everywhere. One of the more interesting trees was the walking palm; rather than a trunk going to the ground the walking palm has dozens of strong roots that leave the main truck a couple of metres off the ground. When the light in its current position gets bad the palm sends out new roots seeking better conditions and slowly it moves in the favourable direction. The plant can move more than a metre in its lifetime. 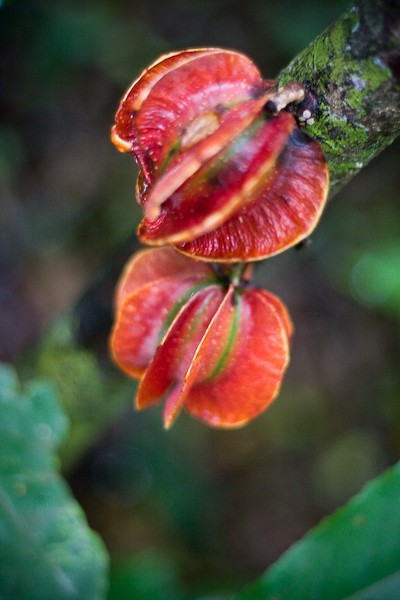 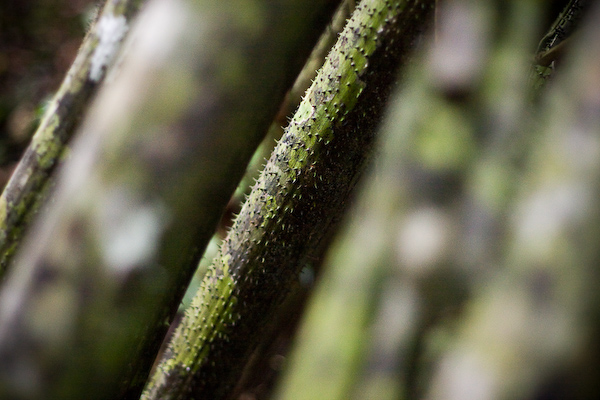 The spiky roots of the walking palm

There were many insects as well; many varieties of orb web spiders hanging in the air looking vicious with their angled legs and often brightly coloured bodies, ants from leaf cutters in their thousands making trails in the forest floor to yellow striped tiger ants to the largest ant in all the Americas, the fearsome bullet ant. Naturally there were butterflies as well, even a couple that managed to stay still long enough for photos to be taken. 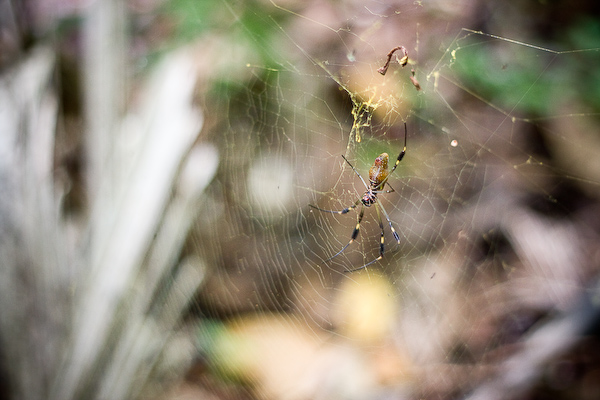 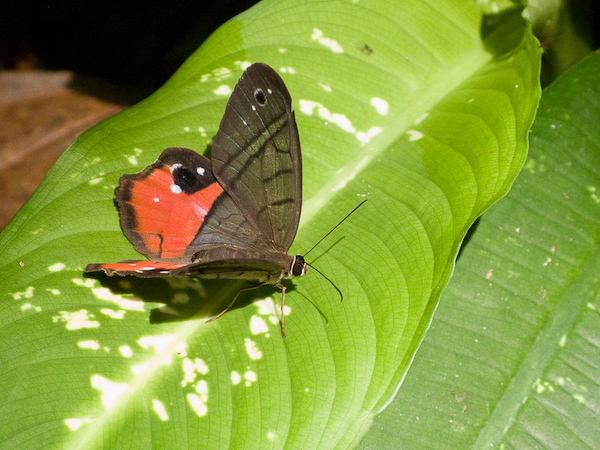 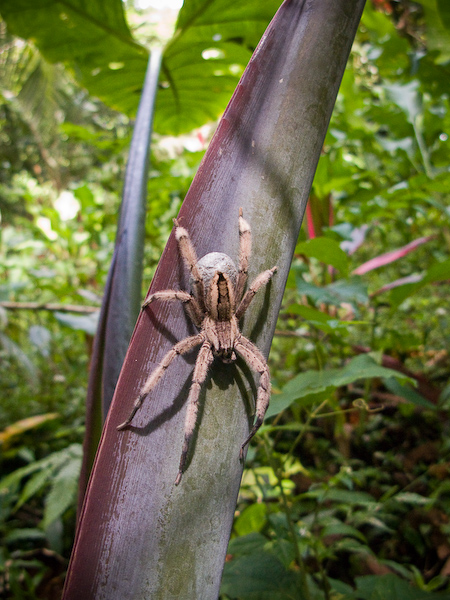 Leaving the forest we came to a beach and had a few minutes to rest and take in some water. Omar expertly extracted a coconut from its woody covering, hacking off the woolly inner shell and then opening it up so we could sample the tasty milk inside. It was then sectioned and we chewed on fresh coconut flesh as we headed back towards Manzanillo. The path took us in and out of the forest, Omar switching between trails seemingly at random. 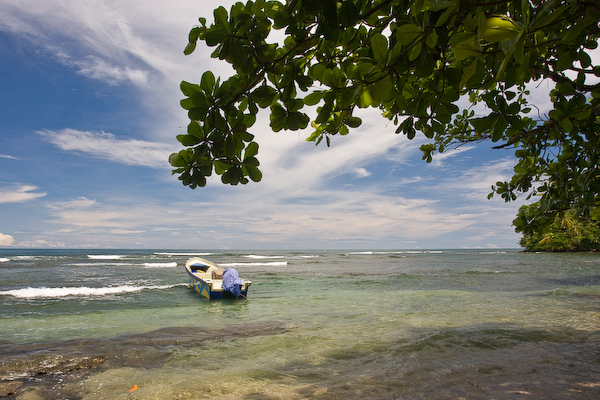 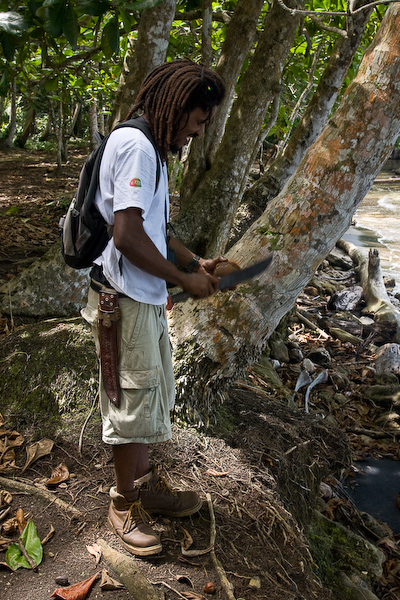 Just past another lovely beach we came across another group on a nature hike and they had spotted another three toed sloth, this one less active but much closer to ground level. We all took photos as Omar called to get the sloths attention, its head very slowly turning our way to see what the fuss was about. We walked out to Manzanillo point, also called Lady May’s point after the woman who lived and died in her house nearby. The views down the coast were stunning in the bright sunlight. From here we walked quickly back to the town as the next bus was leaving soon and if we didn’t catch it we’d have a four hour wait for the next one. 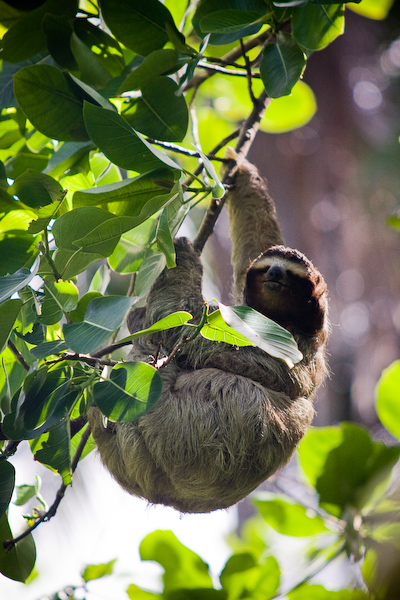 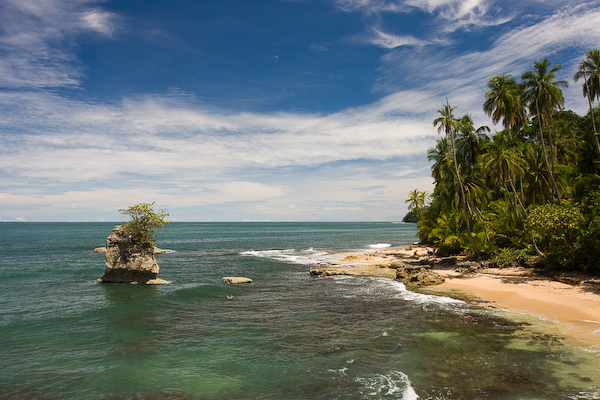 We got an ice-cream and ate it while waiting the few minutes for the bus to arrive. The bus ride was short and we were back at the house ready for lunch. The afternoon passed quietly as we did not a lot of anything, the highlight being when Keryn’s package from the UK arrived. Patty had posted this a few weeks back and Keryn had given up hope that it would arrive so it was quite a relief to finally have it in her hands. Dinner was made and that was the last excitement for the day, hopefully tomorrow is just as nice and we’ll manage to get up early for a pretty sunrise.