Tonight there would be a late departure, an overnight journey to San Cristóbal de las Casas. As such we had to pack our bags and place them in a single room with everyone elses so our rooms could be made ready for the next occupants. This meant I had to carry around the extra weight of the laptop all day which wasn’t so much fun.

We had booked another tour today with Ivan. He picked us up at 10am and we drove to the Zapotec ruins of Monte Albán. The site is special for two reasons, the first aesthetical and the second historical. Monte Albán is set on the top of a mountain in the center of the Oaxaca valley and there are beautiful vistas in all directions. When the site was excavated hundreds of tombs were discovered, each containing the Skelton and possessions of the deceased. The quality and range of items found is apparently without peer in all of Mexico. Evan took us around and explained some of the history and supposition on the sites construction and eventual desertion. Because of the elevated position and the lack of any natural water supply it is supposed that the Zapotecs had to abandon the site simply because of the huge effort required to get water during the drier months. 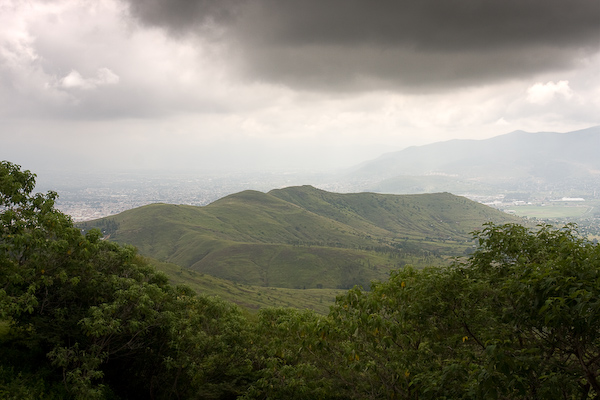 The view from Monte Albán mountain-top 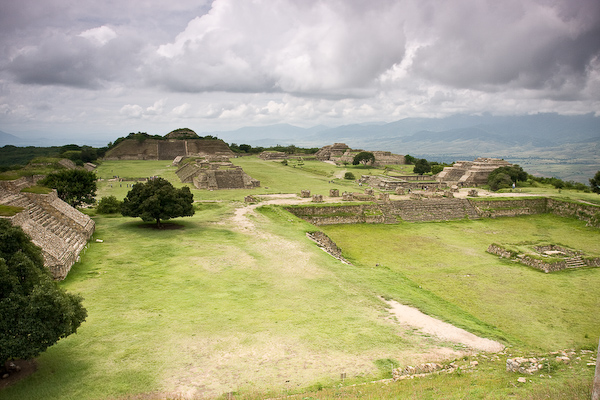 Ivan gave us time to explore ourselves and we spent a period sitting on the stairs at the top of the Platforma Sur, the largest pyramid on the site. We walked back to the entrance, had a look around the small museum and then we were done. The afternoon was spent relaxing and walking around the town some more. We had lunch in the markets with Juan Pablo; we chose chicken enchiladas which came with a red Mole sauce. I have to say that the red mole is nicer than the black, more flavoursome. On the way into the market we passed stands for food and clothing as well as the strong smelling meat section. There was a stand on the street selling chicks, dyed in multiple fluorescent colours. 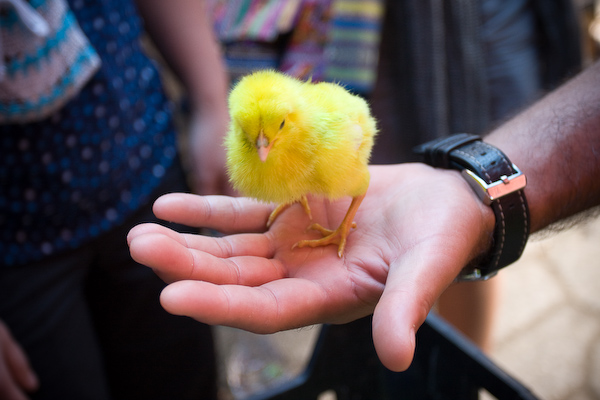 Back at the hotel in the late afternoon we sat and waited for the taxis to arrive. While talking to Miriam I had noticed a local man head down the road and return with a lovely looking slice of chocolate cake so I asked Keryn to head down the road and grab a slice. Keryn returned with the cake and another slice for herself of orange sponge. A few other slices were purchased by others as a result. At the allotted time the taxis turned up and we were on our way to the bus station where we waited for a while for the correct bus. Soon enough we were all loaded up for the overnight journey, twelve hours in the darkness to San Cristóbal.