The activity for today was horse riding with a company called Say Ta. We were driven out to the house where we would take our ride and then have a meal. This was the perfect introduction to Argentina, the day was nigh on perfect.

At the house we were met by Melanie, a Swiss woman staying at the house and helping out with the preparations for the day. She sat us down outside for a nice breakfast and then helped us with our putting on our chaps. There was another Swiss woman staying at the house and she joined us for our ride and afterwards for the meal. The horses were bought around and we were all lined up by the Gauchos and paired up with one of impressively healthy looking animals. One of the gauchos was riding a feisty horse and had a bit of trouble getting on, the horse bucking and spinning around. I would have expected our horses to spook a little at this but they sat placidly, obviously well trained. 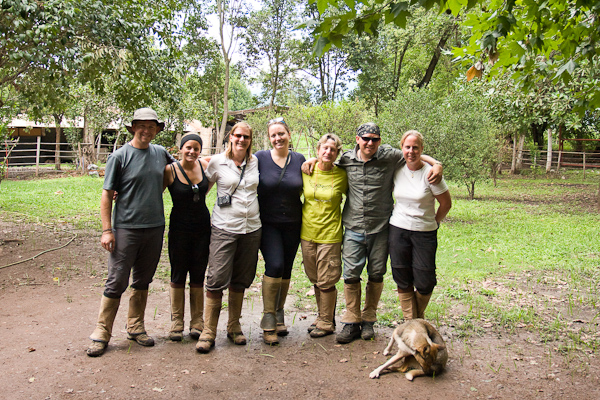 We rode for a few hours over country lanes and paths. We stopped at a field and those that wished went for a bit of a gallop. My horse required a little encouragement to gallop but once going it was a smooth ride, I think I’m getting more used to and more relaxed about horse riding. On the return gallop Keryn’s horse took off following another horse and she was caught by surprise but managed to hold on. 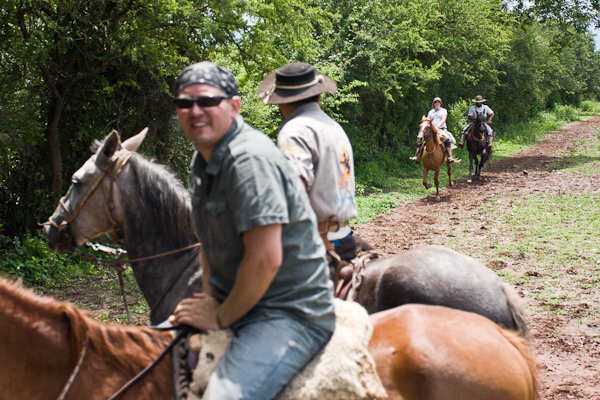 Keryn coming back at a gallop 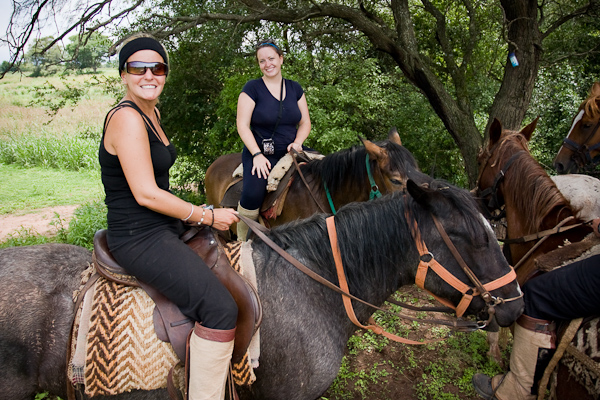 Lucy and Erica enjoying the time in the shade

The gaucho with the wilful horse was slowly training it and spent some time standing in the saddle, having the horse prance and taking the horse in zigzags along the road. We talked with some of the gauchos, sons of the owner, and just enjoyed the time on horseback in the sun. 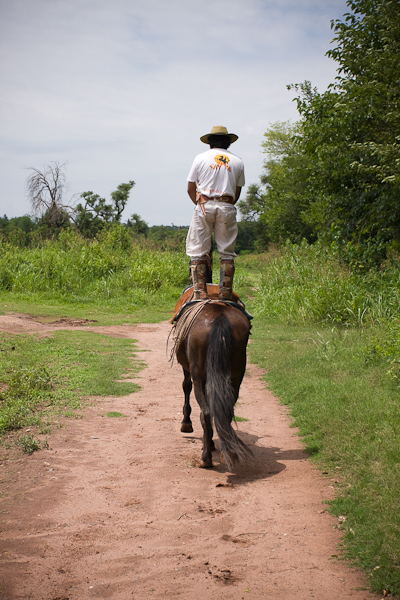 Standing in the saddle 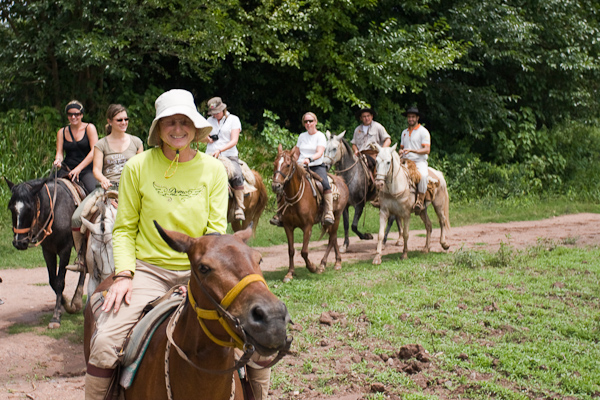 Moving on from the galloping 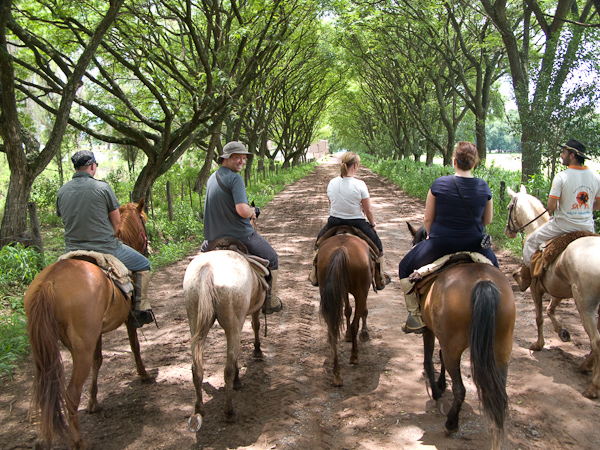 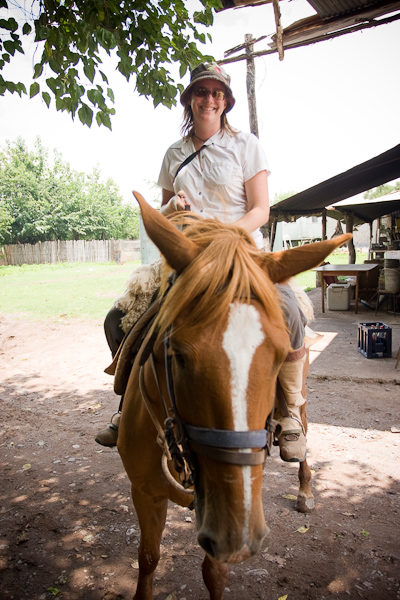 Keryn and her horse

Arriving back at the house it was time to relax. We sat outside drinking water and wine and watched as preparations took place to get the asado, the Argentine BBQ, ready. Enrique, owner of the house, was overseeing the asado and came over to talk with us. This man was like the uncle we had all never met; a little eclectic, a little mad but overall generous, happy and loveable. The hospitality we received from Enrique was second to none and he encouraged us all to eat and drink far too much while imparting advice and pearls of wisdom.

The wine we were drinking was organic and made in the Calafate region by Benedictine Monks and we were told that we would not have hangovers in the morning (which was largely true). The steak we were served (again and again) was nothing short of divine, beautifully cooked on the rare side of medium and was tender and tasty. With the addition of chimichurri, a thick Argentinean dressing of oil, garlic and herbs it became wonderful. There was other food as well; pumpkin cooked whole on the BBQ, potatoes and other vegetables. All of it was amazing and seemingly never ending. We all had only one glass of wine, Enrique always filling it for us before we could finish. 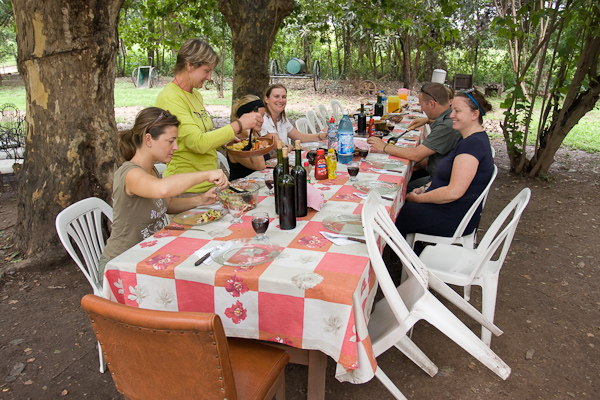 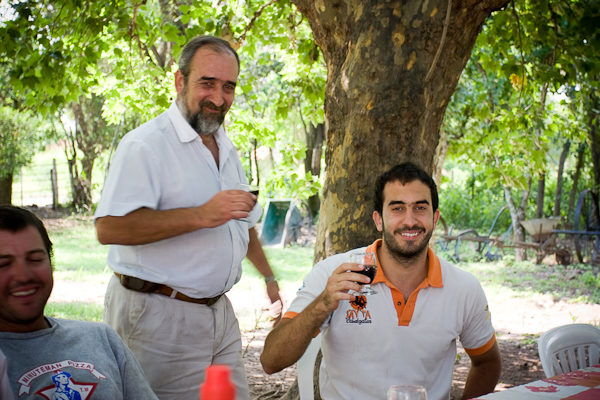 Enrique with one of his sons

Rhys and Vanessa had stayed in Salta for the morning and followed us out in the afternoon. Tranquilo rocked up and then our driver and guide joined us for food and drink. Rhys retired to a spot in the sun, taking out his swag for a mattress and falling asleep on this lazy afternoon. Enrique was imparting more wisdom, looking at people and telling them they would soon be married or having children in the next few years. He made me promise I would let him know as soon as Keryn and I had children (which would be in the next year he said) and told us that we should be “Making fucken babies!” morning, noon and night. Enrique’s sons came out during the meal and sat down by the table and started singing gaucho songs, playing on guitar and drum. They were very good and added another element to this perfect afternoon. 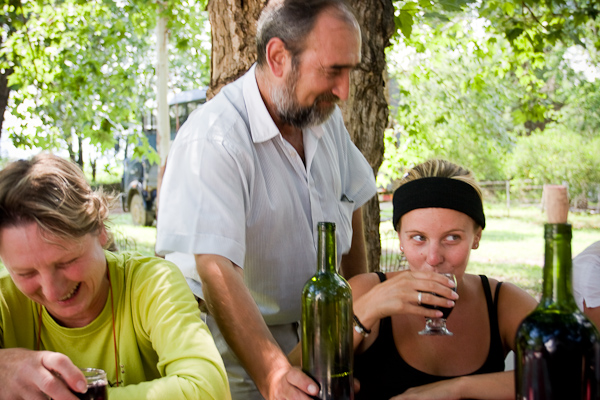 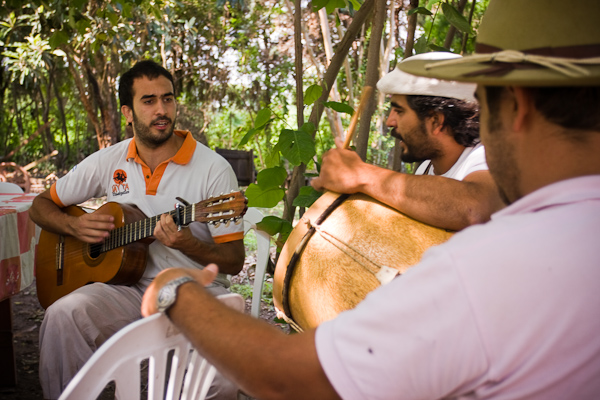 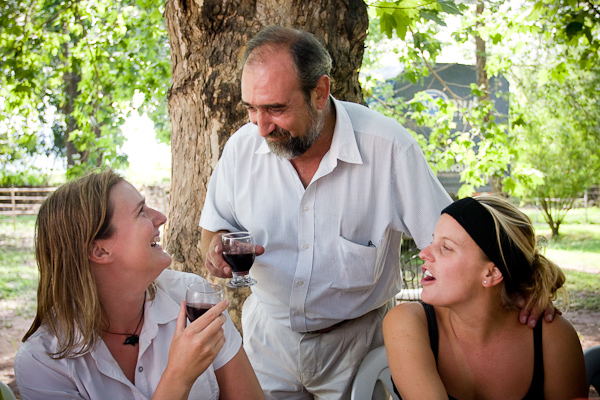 Always look in the eyes while sharing a toast

It did have to end, we couldn’t spend too long sitting around the table under the tree in the dappled afternoon sun eating fine food, drinking fine wine and listening to this larger than life personality. We had to drive on to our next campsite at a place called Salta Rafting. It took a while to convince Enrique that we should be allowed to leave but in the end we were able to finish our one glass and board the truck. We all had our goodbyes, hugs and kisses exchanged. It’s easy to see why people like Melanie stay here, if we weren’t on a tour I’d have stayed in a flash. 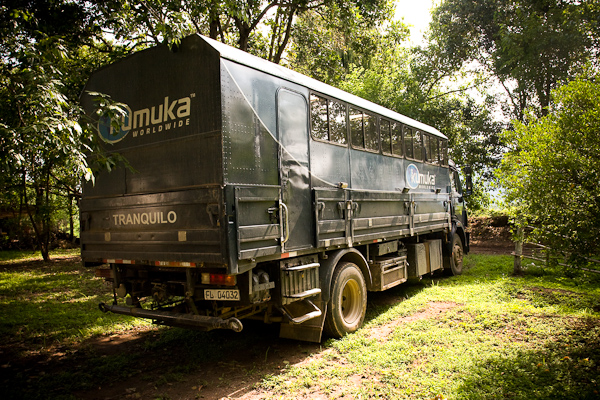 Tranquilo in the sun 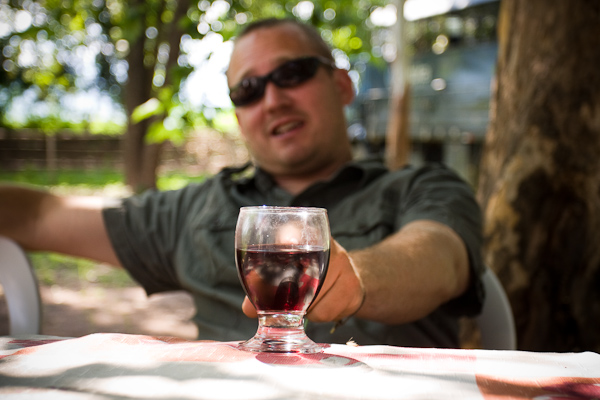 It’s all about the wine 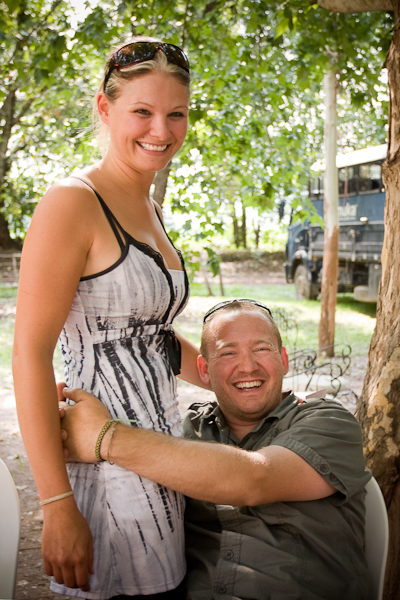 The weather stayed warm and sunny as we drove on to the Salta Rafting event centre and campsite. We drove past lakes and rivers, coming through a high sided valley and passing a dam before arriving at the campsite. The guys we had met at dinner the previous night had come out for the evening and spent the night drinking and talking with Rhys and Vanessa. Against the odds there was wifi at this place in the middle of nowhere so I spent time uploading photos and burning DVD’s for Mark who would be leaving us the following day (he had stayed overnight in Salta and we’d see him the following day).

As it got dark lots of toads appeared, looking like the cane toads that are overrunning Australia. One toad was huge, almost the size of a football. At the bar area where I was toads were hopping around eating the bugs as they fell to the ground after hitting the lights. Later on I set up my tripod to try and catch some star trails, leaving the camera shutter open for a few hours to record the movement of the stars across the sky. Unfortunately the camera battery ran out while the resultant photo was being processed so I got no photo in the end. A lesson learned for next time; make sure the batteries are fully charged.