The Palenque reserve opens at 8am so Keryn and I were up early to try and get to the gates for this time. We walked out of El Panchán to the road and paid our reserve entry fee just as one of the public transport vans came past so we hoped in and were driven to the entrance of the ruins. We had to wait about five minutes for the staff to be ready to sell tickets and after paying our 48 pesos each we were off to the final gate. The staff at the gate pointed at the tripod I was carrying and then at a sign that said tripods carried an additional fee…just over $300 US! Obviously if you have a tripod you are classed as a professional. I paid the much lower 10 peso fee to have the tripod held at the gate and then we were on our way. 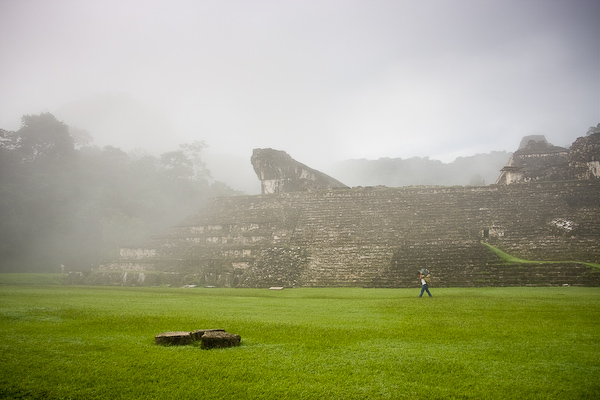 A misty morning at the ruind of Palenque

Palenque is the first Mayan ruin we have visited and we came off a garden lined path to find ourselves at the base of a line of temples, the biggest of which is the Templo de las Inscriptiones, a 26m high stepped pyramid. This row of temples had obviously been cleaned recently because they were a nice creamy colour in the morning light, free of lichens and other marks. The temples were clean facing us but still covered in the jungle foliage, trees and palms and other greenery seeming to be sucking the structures back into the wild. We walked parallel to the temples and towards a tour group listening to a guide underneath a large tree. Walking around the group we had the biggest structure on site ahead of us, El Palacio. Other than the tour group the site was largely empty of tourists and the last of the morning mist was still swirling over the hills and down at one area of the site. In the distance we could hear the growls of howler monkeys, the temperature was warm but comfortable other than the high humidity level. Walking up the wide stairs of the El Palacio structure we took a moment at the top to look around and it was decided that we would head towards the mist to get some atmospheric photos. 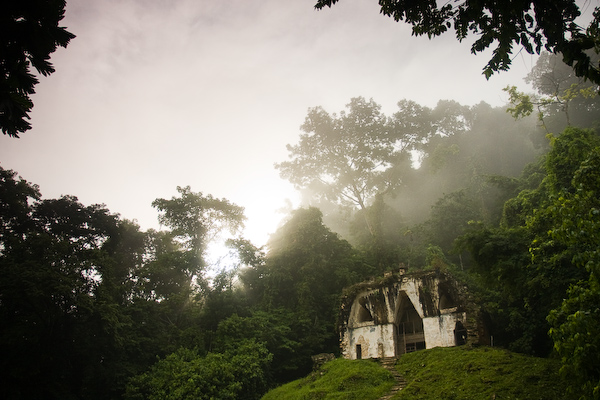 The mist fading away from Templo de la Cruz Foliada 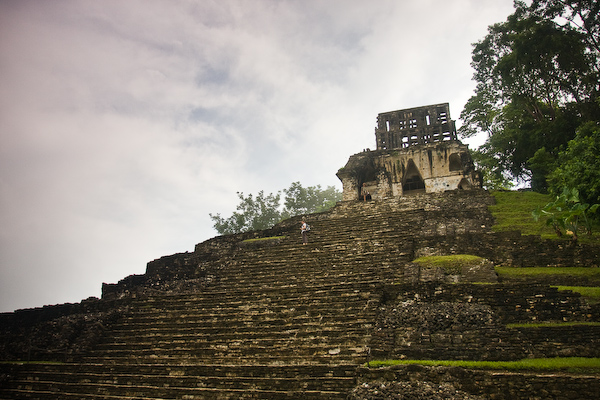 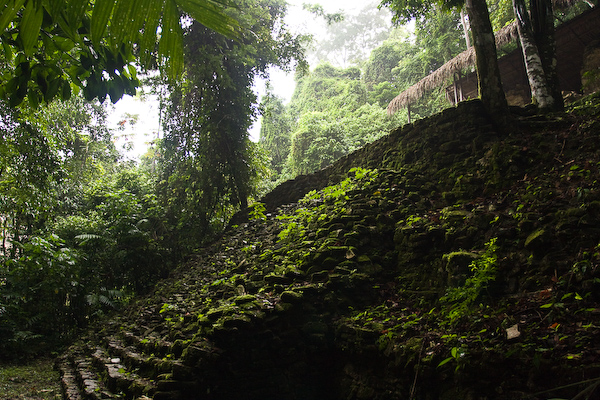 Hidden in the jungle was this Temple

Back at ground level we walked over the grass towards a mist enshrouded temple and then Keryn stood on a bee and got stung. Flicking the bee and sting off with a knife we decided to instead sit down and have our breakfast. Thankfully other than the pain there was no real swelling and Keryn was able to continue. For the next hour and a half we wandered around the site, walking through jungle to see overgrown ruins, climbing up the large Templo de la Cruz to get another view over the site and generally just exploring. As 10am approached we started walking back towards the site entrance and had a nice sit down while we waited for the group to arrive. 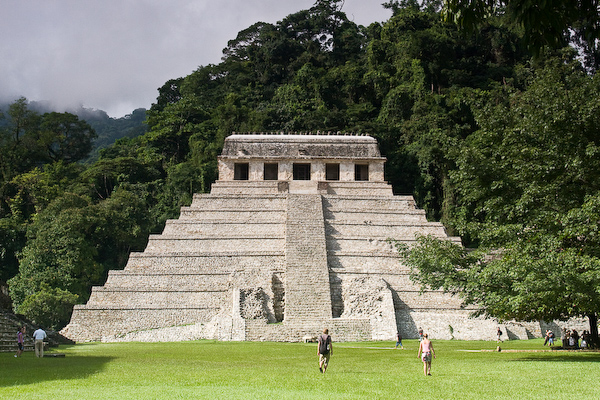 Once everyone else was on site we joined in for a guided tour. The tour guide was very knowledgeable and led us through the history of the site, when it was found and excavated and gave information on the tombs and their occupants. The sun had burnt off any remaining mist and the walk was now hot and humid. Artisans who had been setting up during our earlier walk were now offering their wares and they seemed to have bought the butterflies with them, not large numbers but often seen; yellow, brown, orange or iridescent blue flitting through the air. Ben spotted an iguana sunning itself and it moved only slowly as we approached allowing photos to be taken. 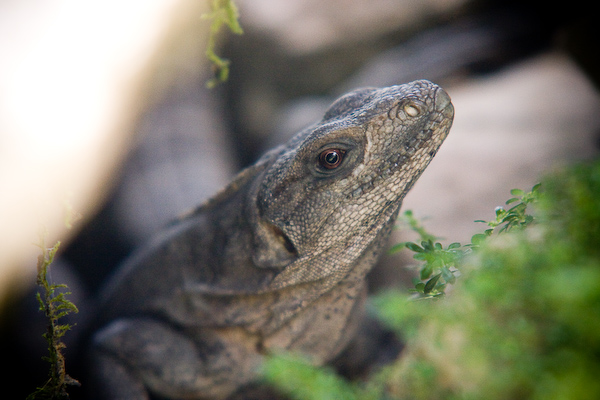 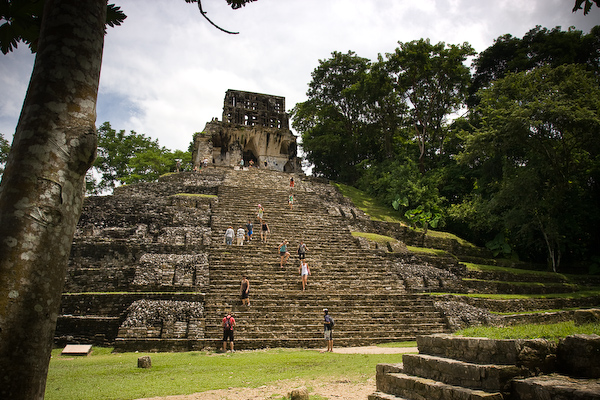 Some of the group coming down Templo de la Cruz 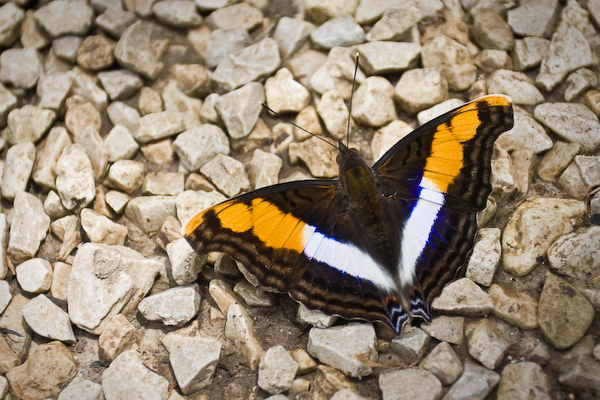 A butterfly patiently waiting to be photographed

We spent an hour and a half with the guide before he departed. We walked with the group up to the Templo de la Cruz and sat in the shade eating crisps while others climbed in the hot sun. Walking in the direction of the site museum (closed as it was Monday) we walked along a stream, reaching a bridge with a view over some little falls. We walked around more ruins still embedded in the jungle and I took the path down following the stream eventually coming to a lovely waterfall where I used by camera bag as support to allow for some nice photos. 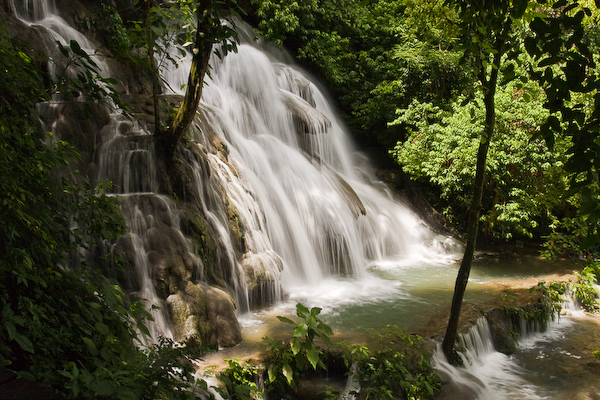 Walking back to Keryn we headed to the site entrance to pick up the tripod and then head back to El Panchán. Again a van arrived as we walked up to the ticket office so we got in and were soon on our way. We passed most of the group walking along the road. At the bungalow I had a shower for a brief respite from the heat and then it was down to writing and sorting out photos.