Rather than the usual bus Juan Pablo had organised a van so we could make the journey to Palenque with a couple of stops to visit waterfalls along the way. We had been warned that the road was worse than that we had experienced on our night bus adventure so everyone who thought they might need it took anti-motion sickness pills. It turned out to be fine, the road was indeed full of twists and turns but the van felt very stable of the corners and the driver was fine. Three hours of driving bought us to our first stop at the waterfalls of Aqua Azul.

We had to pay a couple of tolls on the road down to the falls. Apparently two local groups claim rights to the falls and as a compromise both sets have road blocks where the tolls are collected. At the car park near the base of the falls we disembarked and walked towards the sound of rushing water. With the rain we’ve been having it was no surprise to see a swollen river, milk chocolate brown, sluggishly moving to our right. Along the length of the falls, a number of local restaurants and souvenir shops were arrayed. None looked exciting or in the case of restaurants appealing. The falls themselves are a series of cascades, large and small. It was hot and humid and the overly built up surroundings took away from any charm the site may have once had. 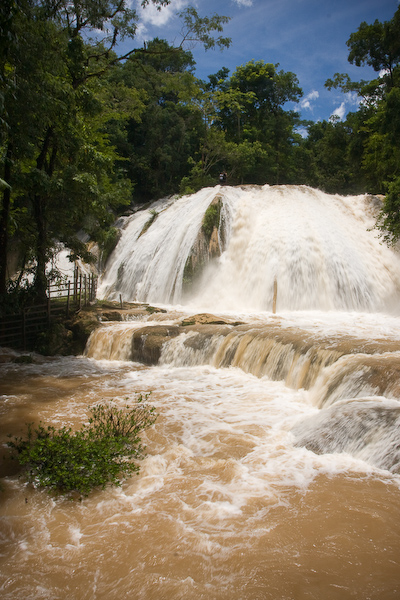 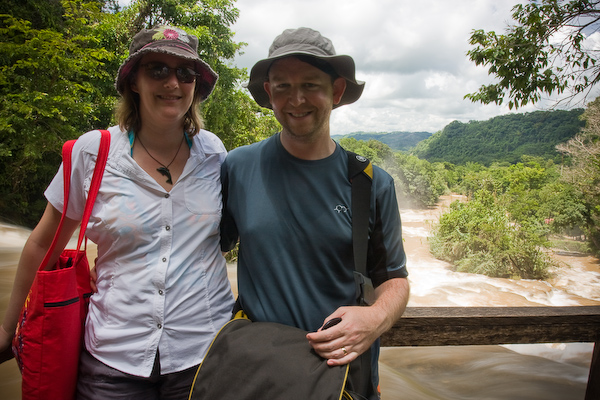 At the top of the largest fall

Keryn and I walked up the path, stopping to look at the cascades and eventually reaching a viewpoint near the lip of one of the largest falls. The water was flowing fast at this point and the high level saw water spilling over the end of the platform. We took a few photos and then headed back down in the direction of the car park. Most of the group was at a restaurant so we sat down and ordered a couple of drinks. Keryn’s small orangeade took ages to arrive and turned out to be a jug or orange cordial with maybe one orange squeezed into the mix. Others who had ordered food got such delicacies as oil-sodden fries, bending wetly as they were picked up. Apparently the kitchen looked disgusting. We didn’t stay much longer, heading back to the van and on to the next waterfall.

Forty five minutes of driving bought us to the much more impressive fall of Misol-HÃ¡. Again we paid a toll, this time only the one, and drove to a car park. There had been only a few people at Aqua Azul and here there were even less. Other than the smart looking convenience shop and restaurant by the car park there were no further tourist facilities. Walking down to the waterfall we came to a big tree, walking on the path that passed around it base we were presented with the view of a large single waterfall thundering down into a pool. 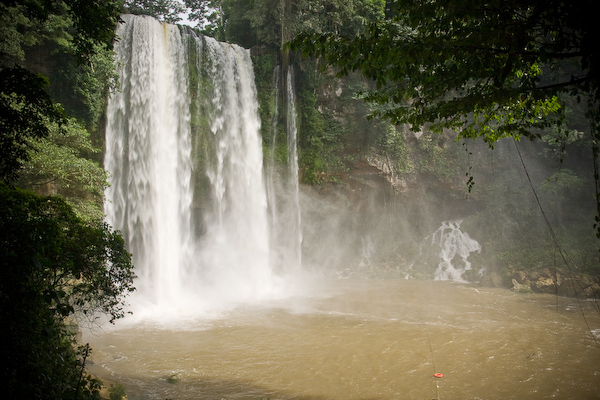 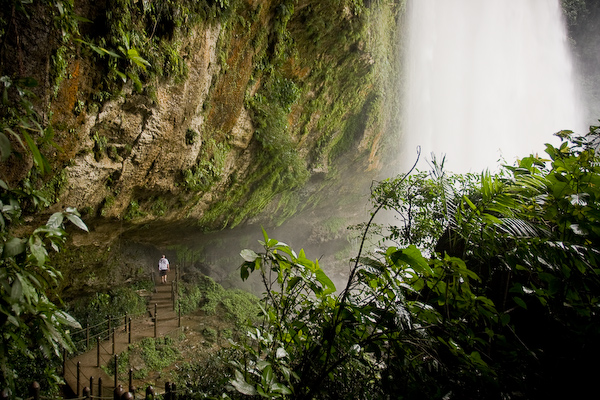 The added advantage of this fall was a path that entered in behind the fall. Setting off after photographing Misol-Há from the front we followed the indicated wet concrete path to a point where we could see the back of the falls. In ones and twos people took off any gear they didn’t want to get wet and walked along the path behind the falls. I went with Mark and we went right to the end of the path which ended up low underneath the rock and directly behind the main force of the waterfall back draft. It was like being sprayed with a hose, quickly any clothing that had been dry during the walk was wet and we were dripping but smiling as we returned to the watching group. Walking back to the car park we had an ice-cream each and then got back in the van for the short drive on to Palenque.

There was a brief stop in the Palenque town to buy a few supplies and then we were driven to the El PanchÃ¡n complex of simple hotels on the edge of the Palenque reserve. The Palenque ruins are in the middle of a forest and much of the site is still covered in thick rain forest. Parts have been excavated and these we would be visiting the next day. In El Panchán we were staying in Chatos Cabas, small bungalows spaced out within the jungle on the edge of the reserve. The room we got had three single beds, a nice enough spacious bathroom and a ceiling fan. Having carried our gear from the car park, through the site restaurant Don Mucho’s and along the path we were hot and the high temperature and humidity meant we were dripping with sweat as we put down our packs and bags.

We met Juan Pablo in the restaurant and it was decided that the group would do a tour of the Palenque ruins at 10am the next day. Keryn and I grumbled a bit, we wanted to be there earlier, so we decided maybe we’d try get there at an earlier time and meet up with the group for the tour later on. It was starting to rain lightly at this point and after the meeting we decided to join with others in Ben and Lisa’s room for a few drinks.

In the time it took to get back to our room and grab the drinks the rain had got a lot heavier. The short journey from our room to the others saw me getting saturated in the tropical downpour. Over drinks and music we all chatted and listened to the thunder of the tropical storm hitting the area. It rained for hours and when we all made our way to Don Mucho’s we found most of the restaurant under a half foot of water. No food or drinks were being served so a group of us went off to see if we could find an alternative venue.

We found another place that could cater for us all and gathered the group. We were seated in an upstairs room, open to the elements apart from the roof and floor. There was only one guy waiting on us and the other two groups so food and drink took a while to arrive and it was all mostly simple fare, but largely tasty none the less. The storm continued but was easing off – though we could still see the jungle canopy defined in the distance as the lightning lit up the grey skies.

Walking back through the dripping trees the stream that ran parallel to the path seemed to be a bit lower so obviously the rain was now less intense. Back at the room we half expected to find a damp floor but it was dry other than an area near the door. We fell asleep to the noises of wet trees dripping water and the soft whirl of the fan in the room spinning around.