Keryn and I were part of the group heading out to the Actun Tunichil Muknal (ATM) cave this morning. The name means Cave of the Stone Sepulchre and inside can be found remnants of ancient Mayan rituals and sacrifices.

We were picked up at the Trek Stop and after a few stops to sort out getting money, payment and picking up some food we headed on for about an hour to the car park where we would start our walk. Turning on to a dirt road we made two river crossings on our way. The cave is in a reserve so we also had to stop at a ranger office so they could know we were going in and also organise timings if there were other groups already ahead of us.

The walk to the cave entrance crossed over the same river three times, each crossing getting a little bit deeper and the rocks underwater being a little bit larger. Our guides were keeping an eye on the water as the level can rise sharply if there is rain upriver. Other than the river crossings it was an easy. mostly level walk through jungle along a well defined path. The only wildlife we really saw were various kinds of ants, including leaf cutter ants in long lines carrying pieces of green leaf back to the nest. It took about forty minutes to get to the staging point for the cave entry.

We each had a caving helmet and these were fitted with lamps while we all ate a snack or made use of the nearby long drop. After safety and history talks we were led to look at the cave entrance, a dark opening above a stream. We took photos and then our cameras were put into a dry sack ready for the journey upstream and underground. 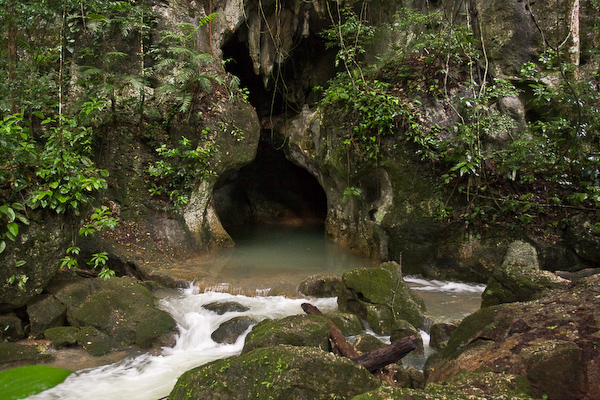 The entrance to Actun Tunichil Muknal

The first traverse saw us walk to the middle of the stream and then swim the 10 metres into the cave entrance. For the next hour we followed our guides up the stream, at times walking on rocks but mostly wading through water, occasionally swimming along in the near darkness. Other than the rushing water there wasn’t anything to see apart from a couple of small cave crickets and the occasional calcite formation that we were under strict instructions not to touch. 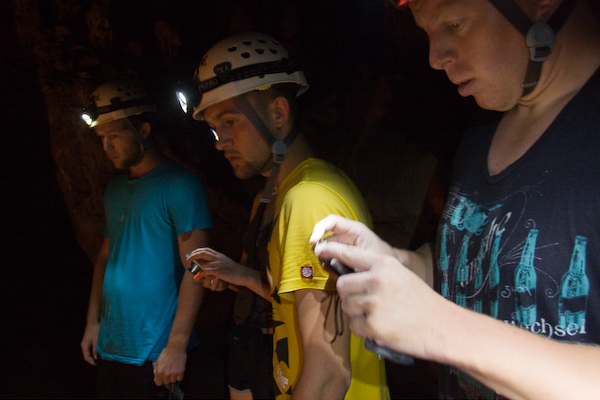 Kitted out in the cave; Mark, Sam and Matt

The Mayan site was about 700 metres into the cave system. We climbed a large rock that took us above the stream and there sat to take off our shoes. Walking in socks meant that we would be more careful about where we put our feet as we trod around the many pots, pieces of crockery and bones to be found ahead. Walking close to each other, following the guides footsteps, we walked up to a wider space where there were pieces of pot all around. The pots had contained offerings and remains which were part of ancient rituals. Most of the pots had been broken as part of these rituals, the contents being released from confinement into this holy space. Before reaching the largest open space we were again warned to watch our step and to not walk in to any of the shallow pools – pieces of pottery maybe lying beneath the shallow sediment. In the cathedral, a large vaulted cavern, we walked along the ridges of the pools and saw some skeletal remains; skulls and small heaps of bones. These were probably the remains of sacrificial victims but it’s unclear and without excavating the slowly calcifying bones the archaeologists won’t really know. 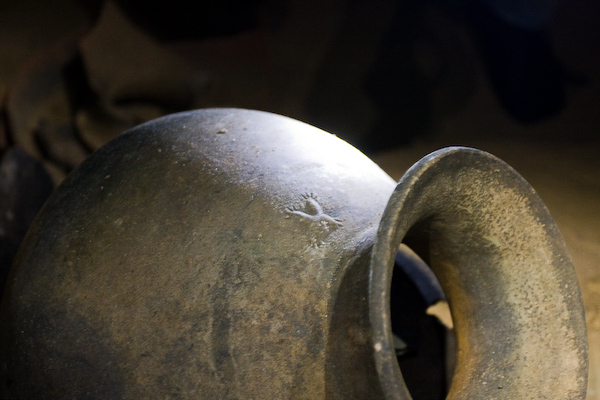 One of the pots 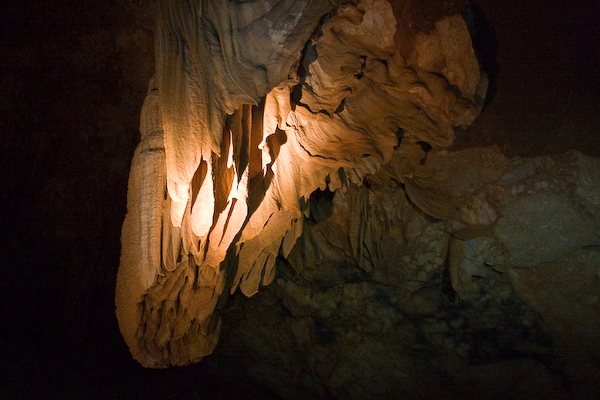 One of the early cave formations

The walls of the cathedral were intricate masses of cave formations, many of the features forming into familiar looking shapes from the right angle; a statue of liberty piece, the outline of a woman. More climbing in, over and around rocks brought us past another small group of people on their way out and then up a ladder to the final sight. In a smaller space, blocked off at the end by rock, we first saw the skull of a child. From the way the skull and skeleton are arranged it appears the child may have been tied up while alive and laid against the wall. It’s not known why, the theories are many. Just on from the skull the skeleton of a woman lies, the finger and toe bones missing, washed away. Fused to the ground by the building lime she lays as she would have been when she died. 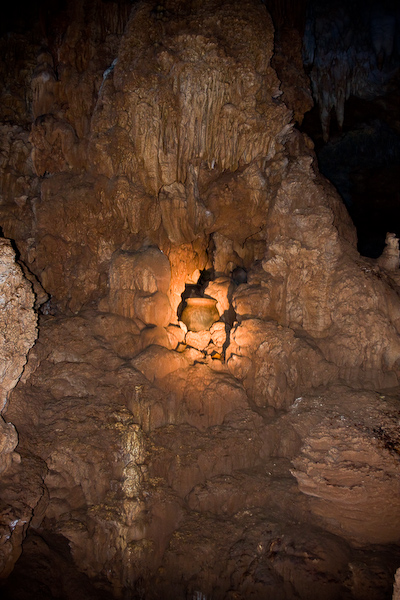 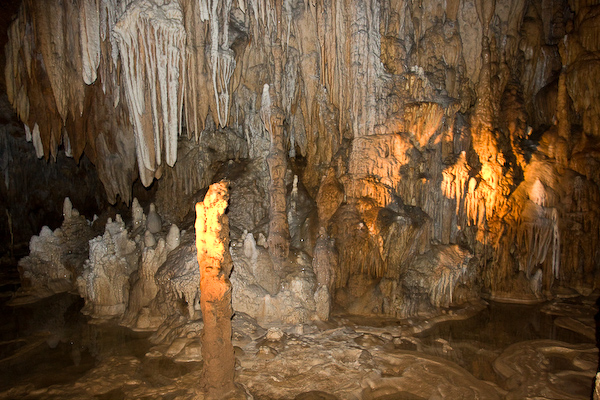 The shadow is meant to be the shape of a woman, I guess my angle was bad 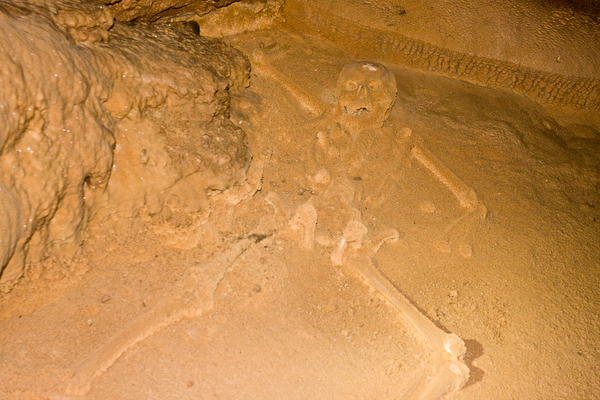 Mark had been feeling under the weather all day and now was shivering with cold as we reached the furthest point. Our return journey was a lot quicker than our entrance, moving with the flow of the stream helping no end. Mark and one of the guides made a quick exit, the rest of us having to take a bit more time to ensure no one injured themselves on hidden rocks and other protrusions. Once we were back in the jungle we dried out a bit, had the remainder of our food and then marched back towards the van. The walk was faster this time, partially to make sure we wouldn’t be caught in any rising water. The water level had noticeably increased as we had walked out of the cave. Thankfully there were no issues on the journey. 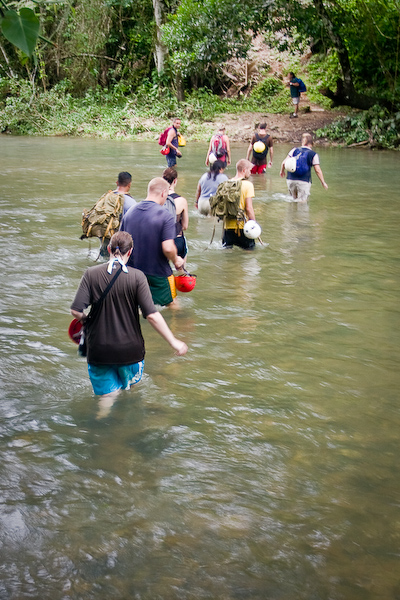 We had fresh fruit and nachos waiting for us in the shelter by the van and after changing into dryer clothes and ate our full. Once back at the Trek Stop it was now early evening and Mark went straight to bed while the rest of us cleaned up and then relaxed while waiting for others to return from their trips. 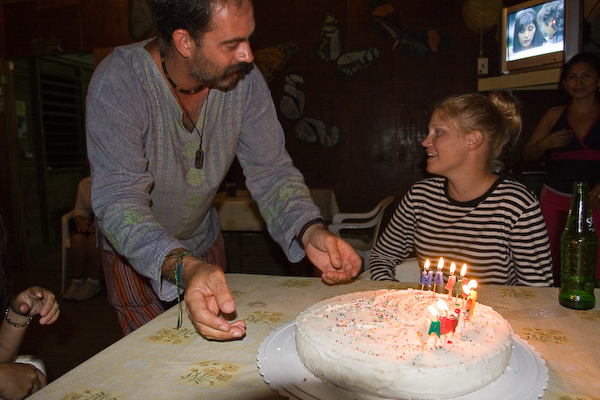 Cake after dinner, Josh on the left and Angie seated

Everyone had opted for burritos for dinner and very good they were too. Josh had another surprise, a birthday cake making an appearance to celebrate the various notable recent dates. The three birthday girls blew out the candles and we all had a large slice for desert. Josh had also provided some rum and once this was finished a few went to the supermarket to purchase more. Some people didn’t get to bed until the very early hours of the morning.