Just about everyone in the group was travelling to the Cayón del Sumidero this morning, the Rio Grijalva running through a canyon where the cliff walls reach up to nearly a kilometre in height. We were driven down from the heights of San Cristóbal down a road that followed the rim of the mountains giving us spectacular views of the cloud hugging the landscape below. Stopping at a viewpoint we all took photos before continuing down through the cloud layer and eventually coming to the river where our boat ride would begin.

Our group took the front half of a wide bottomed boat, the driver and Juan Pablo sitting on a raised platform at the stern. We entered into the fast flow of the high river, the daily rain having swelled the basin with muddily coloured water. Going with the current we made quick progress, leaving behind signs of civilisation and entering a wide valley with the banks quickly becoming forested cliffs, large trees at the base and then yellow and black cliff walls reaching up to cloud covered heights. The first part of the trip had the walls dotted with cactus, just to make sure we knew we were in Mexico I think. 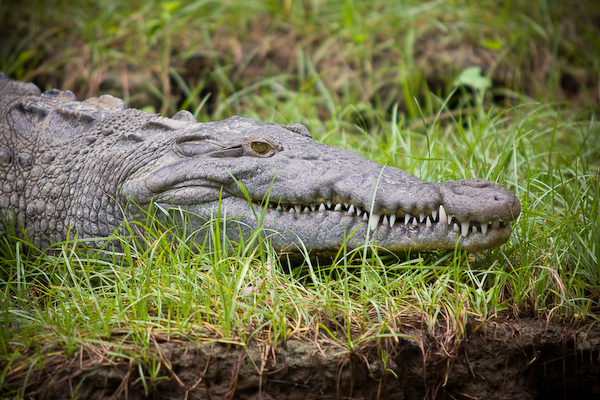 A crocodile of the Rio Grijalva 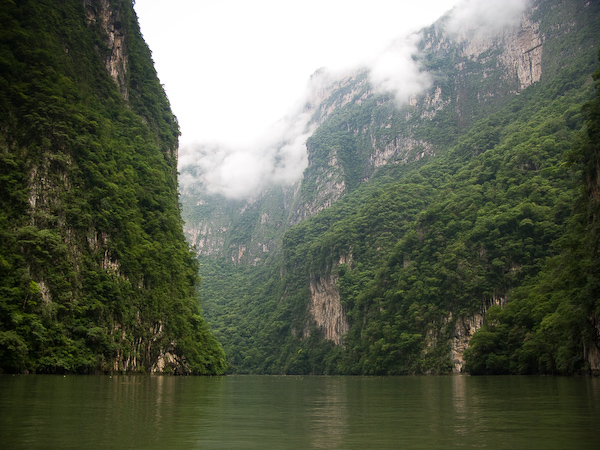 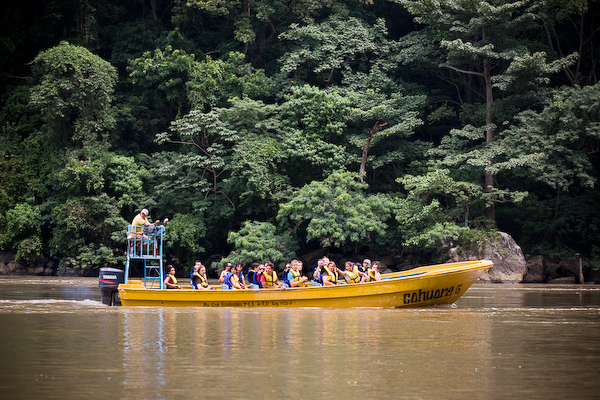 Soon enough the driver/guide saw something on one of the low sandy banks and we moved closer. Our first sighting of a crocodile, Juan Pablo translated for the group so we weren’t left wondering why we were stopping each time. It was a smaller specimen, lying quietly on the sand. Further along we spotted a larger crocodile with an accompanying group of black headed vultures to its side. The lack of movement in the reptile led some to speculate that it was dead and the vultures were gathering to feed. I figured the crocodile was simply resting and the lazy birds were simply waiting for it to kill something so they could pick at the scraps. We saw a variety of birdlife as we made our way down the valley, mostly of the cormorant and egret variety in addition to the often circling vultures. We also got to see some pelicans at the point where we turned around to head back upriver. 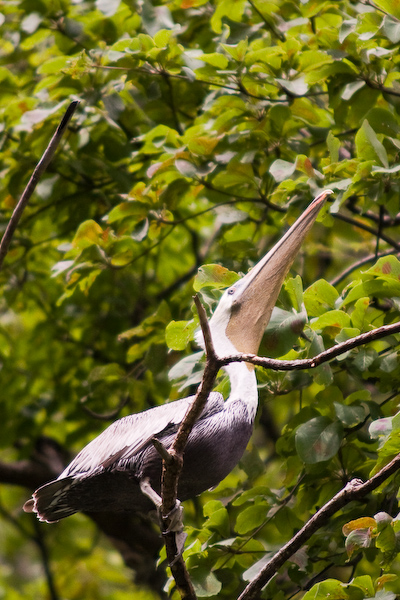 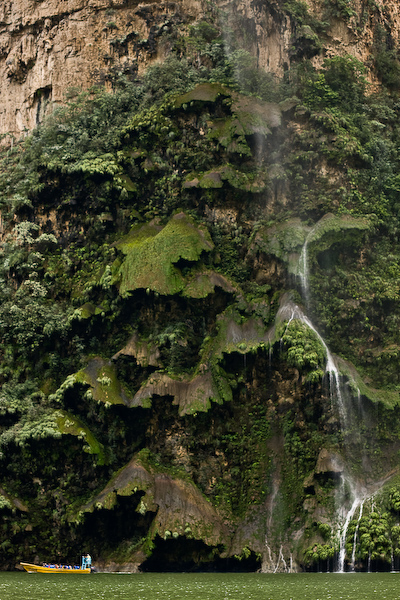 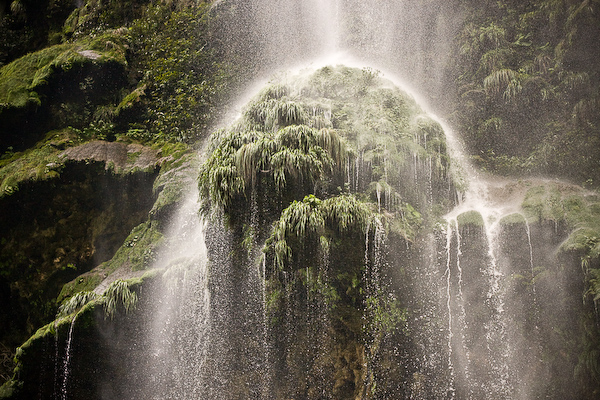 Close up on the falls

There were a few waterfalls to be admired along the way. The last a high waterfall called the Christmas tree because of the strange formations that spread out from its fall. Passing up close to this waterfall we could see the water being caught in the wind and drifting sideways along the canyon wall. As we journeyed back to the dock we stopped a few more times to see more crocodiles. Our sharp eyed guide saw a moving tree and after a wait we got to see a spider monkey jumping from one tree to another in the middle distance. After this we had one last stop to see close up the cactus clinging to the cliff, also seeing a small iguana as an added bonus. 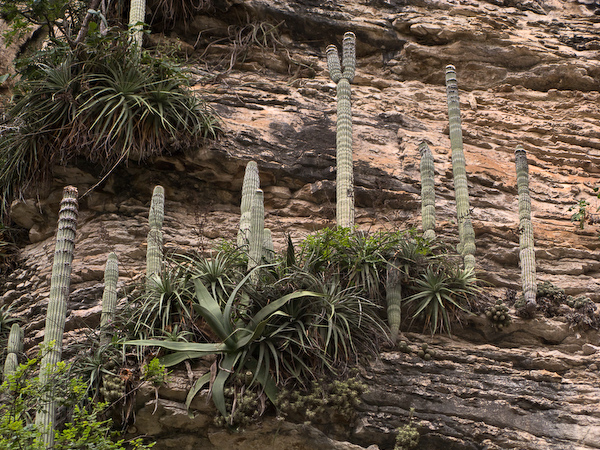 Cactus growing from the canyon walls

Back at the dock we were taken in our van to the town of Chiapa de Corzo where most of us ate the packed lunches we had prepared. There was a parade marching through as we came to the central plaza, we watched as the two large dancing figures passed by, a man out front letting off sky rockets every now and again. In the plaza we could see the Fuente Colonial, an elaborate colonial design of arches in brick in the shape of a crown. Wandering around Keryn and I bought some drinks and then watched as a huge hamburger was prepared at a small stall for the hungry Mark and Juan Pablo. 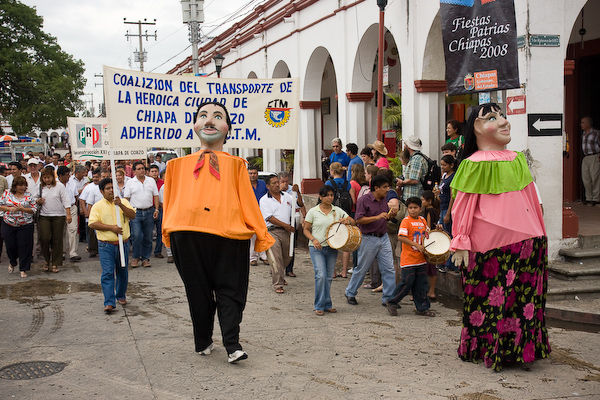 The parade in Chiapa de Corzo 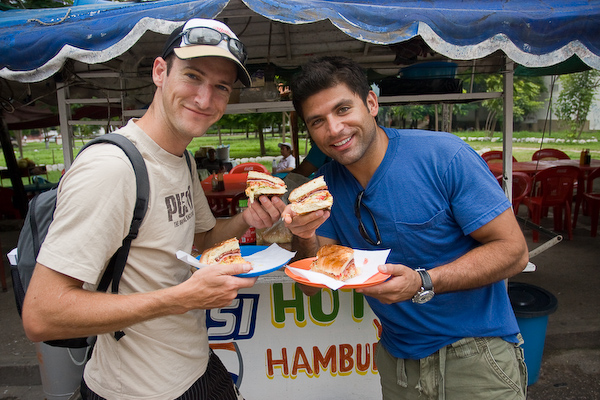 After the return drive to San Cristóbal we rested for a few hours, relaxing over number games or blog writing. That brings us to now; there will be more after it happens I guess.