From the bus station via taxi we travelled to the Hotel San Martin, a mere half block from the San Cristóbal Zócalo. Juan Pablo took us to the travel agency across the road from the hotel shortly after we arrived so we could book any tours for the next couple of days. Most people booked the Canyon tour for the following day and then went back to the hotel for a rest. Mark, Keryn and I paid to travel out to the towns of Chamula and Zinacantán; two towns where the indigenous culture is still alive and well.

The tour left at 9:30am so we didn’t have a lot of time to do anything having arrived less than an hour earlier. We joined with a few other people and were led to a van and started our trip. We had to double back to pick up some more people and then were really on our way to San Lorenzo de Zinacantán where we would be visiting the home of a local family. The two towns still retain much of the way of life of the Tzotzil Mayan’s and we were advised to always ask our guide before taking any photos.

As we arrived at Zinacantán and entered the house our guide went to great lengths to try and explain the world view of the inhabitants. From what I gathered they live for the now, the past has happened and has no impact on the current choices and decisions. There is no hell, only an ‘underneath’ where the dead go before re-entering the circle of life. Only the deities are in the above, people and animals only exist in the middle world and below.

As we stood outside the house a cute little girl with pigtails, maybe three years old, came out and greeted our guide, Rodriquez. She went off and came back with a coke for the guide Rodriquez and he explained this was a gift, something that happens often in this society. We entered to find the father working to sort a pile of what looked like leaves off a tree; he would take a small twig and pick off the best leaves, putting them in another pile. He ignored us and we were advised to not talk to him. The room had a dirt floor and a number of beds around the outside with a shrine taking up one corner. Led through we came to a more open area where a young woman was working a traditional loom making what looked like a narrow rug. The loom was anchored by a strap around her back and she manipulated the strings of the loom herself, passing the shuttle through to build the rug up one thread at a time and compressing the threads with another piece of wood. There were traditional clothes on display for sale and later on Keryn and I were selected to be models for the clothing. 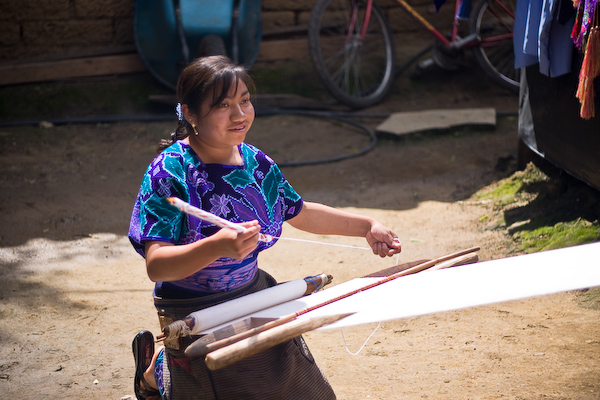 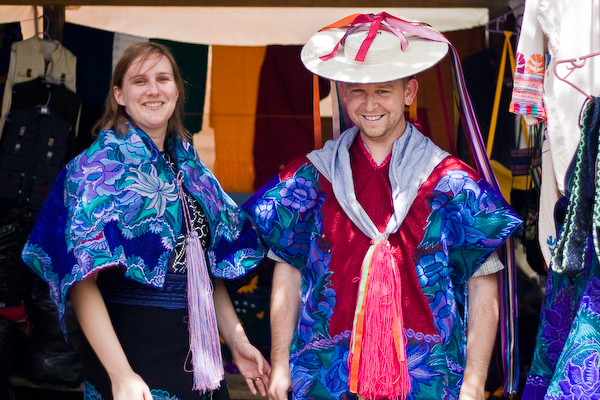 The new locals in town

In the final room we were sat down and watched some food being prepared, corn tacos being pressed into shape and cooked on a low pan. We were encouraged to eat and had lovely warm and fresh food; beans, cheese, a salsa type sauce and an unidentified brown powder all being part of the mix. We also sampled posh, the local alcoholic drink which came straight, with cinnamon or hibiscus. Mark had the hibiscus and found it to be extremely strong. Keryn and I sampled the cinnamon which still had a kick but wasn’t so raw on the throat. Everyone was very pleasant and it was an interesting visit. 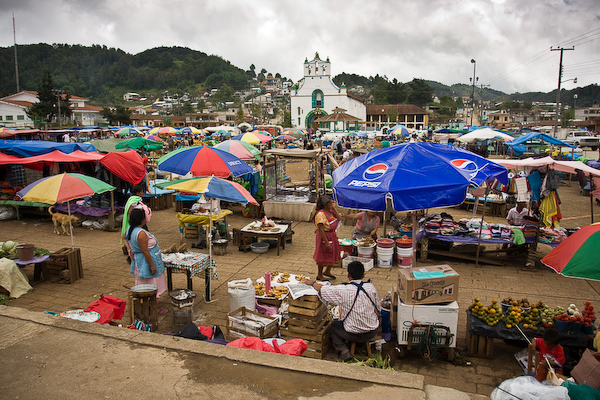 Next we were taken to the town of San Juan Chamula. We walked down into the village towards the Zócalo, passing a graveyard just down from the place where the van parked. The associated church was a ruin and most graves had simple crosses for markers, and many of the graves had three or more crosses back to back for no apparent reason. At the Zócalo there was a subdued market, the guidebook says Sunday is the day with the most activity. We were led to the church at the end of the square, Iglesia de San Juan Bautista. We were warned that if we showed our cameras they would be taken away and we also had to make sure we were not wearing a hat. Through the large door we crossed into a unique religious building. 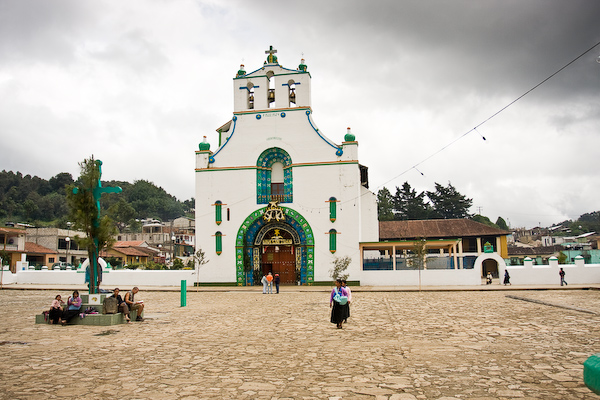 There is no priest presiding over this church. The locals have mixed both Catholic and Mayan beliefs to create a system of prayer all their own. Inside the high ceilings have cloth hanging down at intervals, mirroring the angle of the roof to come down from the apex and be attached at the walls. The two sides of the church are lined with cases which hold statues for a number of different saints, each dressed up elaborately. In front of the statues are tables holding hundreds of candles, all lit and giving a warm glow to the building. The floor is covered with dry pine needles, bunched up in places and making the surface slippery. When praying a space is cleared in the needles and candles attached to the floor. We watched a man dip his thin candles into the molten wax of a lit candle at his side and then stick them to the floor in rows. Rodriquez explained that the candles are part of the offering to the saints, along with liquid (which could be water or coke or anything, the form is not important). With candles lit and kneeling the supplicant then chants or sings, sips their drink and offers their prayer. We saw various family groups or individuals all with their candles and offering their prayers.

One woman in particular stood out. She had another woman and a child with her, the child being loosely held by the second lady. She had her candles laid out in front of her and the child and chanted or played on a haunting sounding whistle. While we looked she took a chicken and passed it over the flames and the child before breaking its neck. Still chanting she held the chicken up while it convulsed in death and then pressed in to the legs and face of the child. Maybe it was a part of the childs induction into the ways of the church, we’ll never know.

All the tourists in the church moved around slowly, not disturbing the locals of any of the candles. It was a solemn place, we felt like we were intruding while also being intensely curious about this venue for ritual outside our comprehension. We departed not really understanding but enriched by the experience. 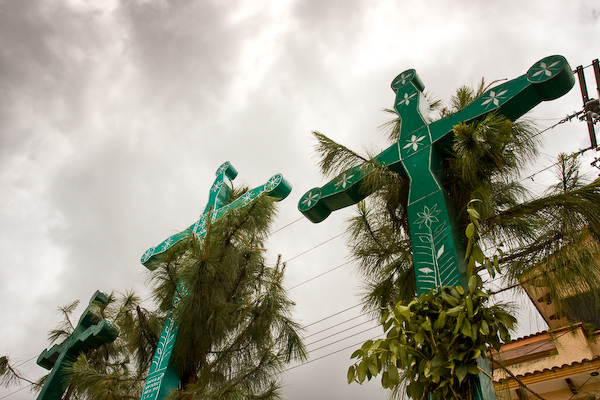 Crosses over the square

We walked through the market and Keryn and I sat at the far side of square just watching the people. Afterwards we made our way back to the van, Mark buying some hacky sacks/juggling balls and Keryn buying a bag we can use for our food as we travel around. The journey back to San Cristóbal passed without incident.

We ended up sleeping most of the afternoon in our hotel room after a brief bite to eat. We went for a walk in the evening around the town, looking at the elaborate frontage of the Templo se Santo Domingo Guzmón. I had seen a pamphlet for a Lebanese restaurant earlier in the day and we had dinner there. The owner and chef had spent twelve years in London and was disappointed that I couldn’t remember the name of the Lebanese restaurant we had been to ourselves a few years back. The food was very nice, a good change from the usual Mexican fare. We shared humus and falafels; Keryn having a lamb wrap and myself a chicken wrap all with salad and yummy herbs and spices. Still tired we went back to the Hotel after dinner and were soon to bed.