Our next destination was Kampong Cham, an old port town slowly fading now the Japanese have paid for a bridge over the Mekong River. We journeyed by local bus with 16 seats reserved at the front, a mix of local people and a few tourists taking the other seats. The journey was about as memorable as a bus journey will be, I remember the inane music synced to sappy videos on the tiny TV screen above the driver more than anything else. At times the music was piercingly terrible, truly awful.

On arrival at Kampong Cham we found ourselves at a very strange hotel. The place was large, each floor of the multi-story building consisting of a largely empty central space with rooms to the outside of the longest sides. The open space could easily have encompassed an indoor cricket pitch, an ice rink of a decent size, a not-too-cramped hotel. The rooms were (based on ours) roomy, if badly in need of an update with minimal decoration and tired furniture and fittings. Still, they were tidy and clean enough.

Across the road and over the bank there were plots of crops, a path down to the river and a fenced off area that held a volleyball court. Young men, two to a side, played a simplified game that seemed to be more about playing than keeping score. By the court and the river bound path another group sat in a loose circle and played a card game, betting money and seeing out the hot afternoon. Next to one of the trees the sprouted out of the paved area between bank and road a fat monkey sat and looked for food, it was hard not to stare at the missing leg. 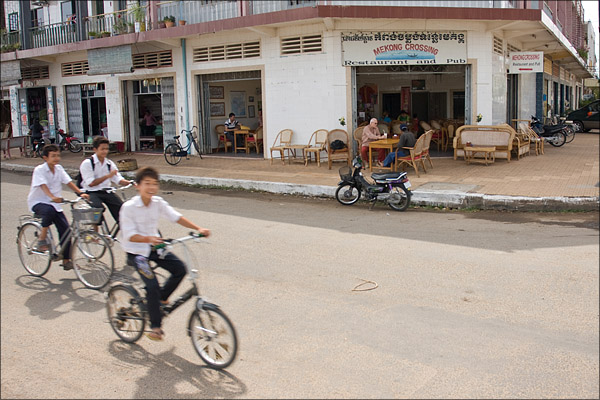 Lunch was had at the Kampong Crossing, a small restaurant on the next block along the road outside the hotel that ran parallel to the Mekong. We were served by the owner, a man who bore a passing resemblance to Freddy Mercury with his moustache and slim build. The food itself was tasty and simple and there was a yummy and home-made (sold from its Tupperware container on the counter) chocolate cake for afters.

After some time to ourselves we all gathered for our afternoon sojourn; a bike ride over a bamboo bridge connecting the mainland with the island Koh Paen in the middle of the Mekong. The bridge is all bamboo and is constructed each year during the dry season, almost literally wrapped up as the rainy season approaches and stored until it can be put back together. The bikes we had were in good running order for the most part, some even had working gears (usually of the hard, really hard and only downhill varieties). We set off down the road, a ragged line of people like myself getting used to riding a bike once more.

The road continued along the path of the river and we arrived at the path to take us down to the bamboo bridge, a dirt track on an incline that tested everyone’s faith in their brakes (or as it turned out lack of brakes). The short but hairy ride became a test or faith and imagination; surely this construction barely a couple of meters wide and made of bamboo couldn’t hold bike and rider up from the water for long? It turns out that it could and did, everyone made it across without incident. A few had decided, however, that enough was enough and the end of the bridge was the end of their bike adventure. A couple of people down we stopped for a breather at the top of the hill just past the small (bamboo of course) cabin where our entry fee was collected for the island. 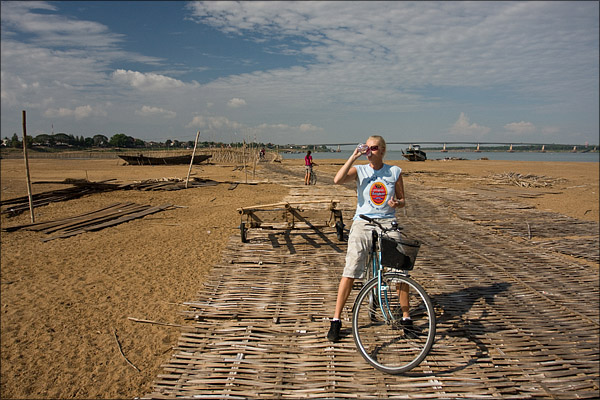 Having a drink after crossing the bamboo bridge

Continuing on dirt tracks we same to a more substantial, if still dirt road and journeyed on past houses and trees, stopping at a small shop to the side of the road. We were encouraged to buy gifts, our first proper stop a short way up the road at a local school. A few bought food and most spared the small change required to buy a few books and pencils. Money was also spend on cool drinks, the unaccustomed energy expenditure taking its toll in the afternoon warmth. 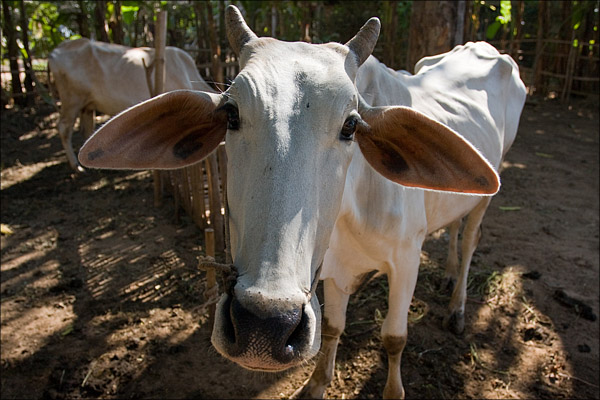 A curious cow at the roadside shop 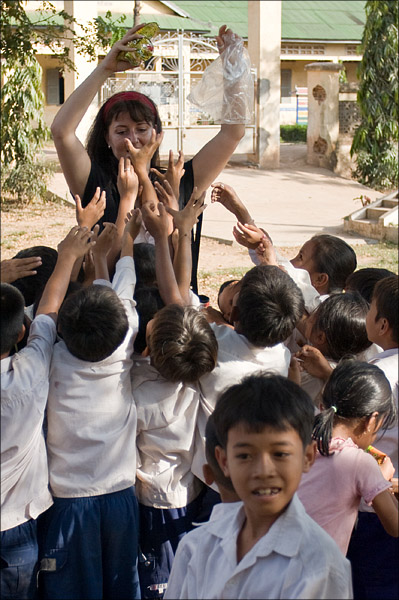 Linda overrun as she gives out food

The school visit was fun, the children obviously happy to see us, even if it maybe was more for the gifts and novelty of our presence. Linda was literally mobbed when she started distributing her small packets of food, almost disappearing under a crowd of youthful arms all reaching for their share of the spoils. Christine and Nick were also surrounded as they gave a lucky girl a book and encouraged her to write and then read her text. The teachers eventually restored order and the children were lined up outside one of the classrooms. We had a number of photos taken of our group all mingled with the rows of kids and then our books and pencils were handed to the slightly bemused head teacher. We looked through the classrooms and talked amongst ourselves or with the teaching staff as the children were tasked with cleaning up the mess they had created in the school grounds from dropped food packaging. For them it was then back to class and we headed back to our bikes to head out to our next destination. 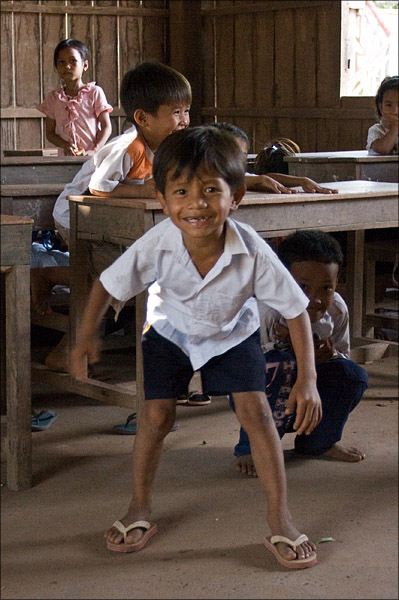 Acting up for the camera 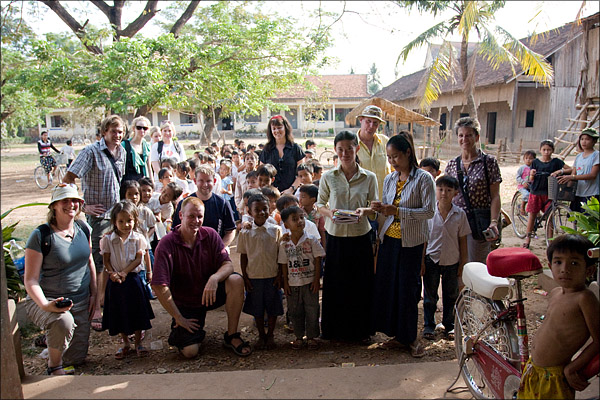 Order is restored for a group photo.

As it turned out the next place was next door, a temple with a few detailed stupa and attendant monks. After looking over the farmland being worked by a family, buffalo tilling the ground, we made our way into the complex. One monk in particular walked with our group as we entered the grounds and made our way up to the main temple, asking questions and replying to our queries. He was friendly, inquisitive but a little shy, especially when his teacher arrived in the temple. We had a look around, asked more questions about inconsequential things and then slowly walked back to the road and our bikes. 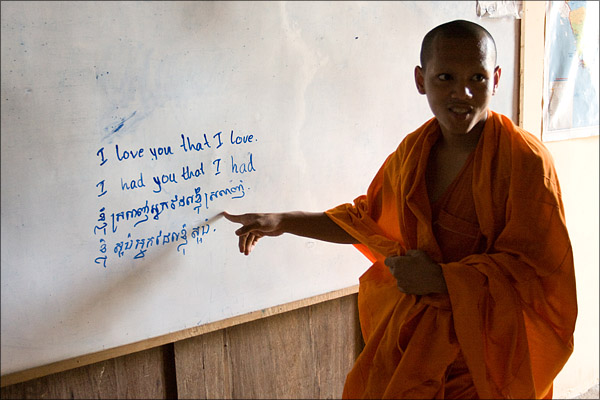 Our friendly and curious guide.

Doubling back down the road and past the school, now finished for the day and leaking groups of children on their way home, we turned off the main path onto another and rode for a ways past more worked land, houses and thicker groves of trees and bushes. Our next stop was at a local home where we were treated to giant grapefruit (white, football sized, very sticky) and sweet bananas. We were given information on the local lifestyle and were again able to ask questions of the adults and the inquisitive children, the children especially keen to ask us questions and practice their English. 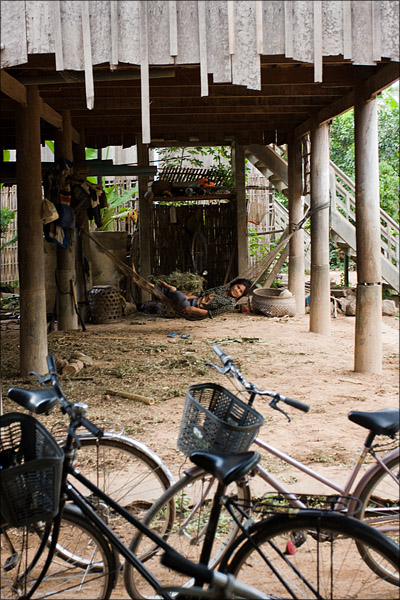 Relaxing as we visit her home.

Then it was on to a couple of language schools, one for younger children just learning their basic English and the other for a smaller number of older, young adult students. The youngsters were all seated when we arrived and many of us took turns to stand up the front, write our name on the board and say where we were from to be echoed by the cherub chorus. We were treated to a few songs (so cute) and Nick had a go at teaching “Twinkle Twinkle Little Star” which was amusing if not entirely successful (though the kids gave it their best shot, even if the words came out a bit jumbled). 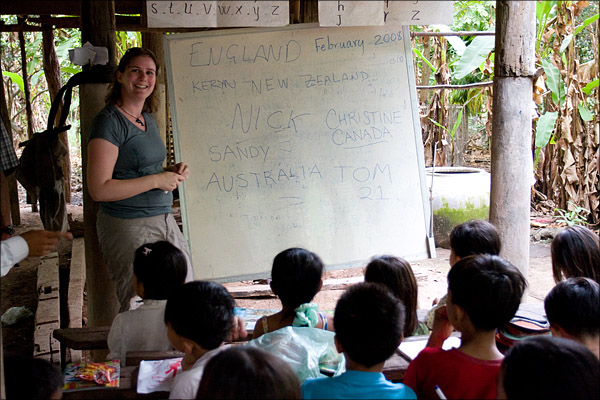 Keryn tries her hand at teaching.

The next door older students were able to ask us questions but seemed to be a mix of those actually curious and those more amused by our lack of understanding. Both schools were simple rows of basic wooden benches arranged between the stilts underneath simple houses. The teachers were obviously passionate about what they were doing, keen to impart the knowledge they had gained and stressing the good that came out of students learning. It was a good experience.

As dusk descended we rode back to Kampong Cham, those at the front running into a herd of cattle being driven along the path and briefly causing chaos. Those of us at the back had a little more warning but it was still unnerving riding through towards the rampaging bovine. We all made it safely through and apart from a brief stop to take photographs on the bamboo bridge we continued on back to the hotel (well, I think most people walked up the incline to the road on the far side of the bridge). 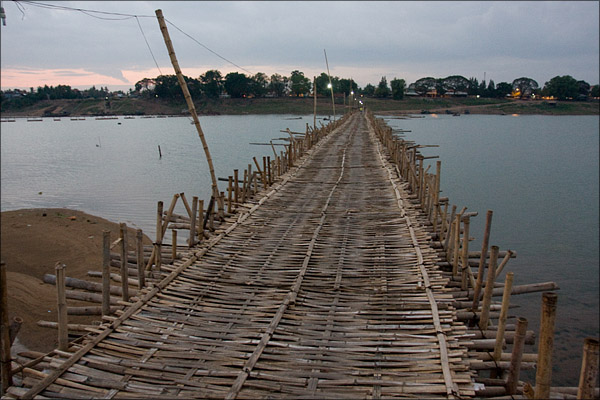 Our wait for dinner was made more interesting by the swarms of mayfly like bugs congregating around the lights of the hotel, we were sat outside waiting for our ride and watched the swarms grow steadily larger – the local geckos seemed especially happy at the ready supply of food. Dinner was a special affair; we were invited to the house of a local man who occasionally provided tours guide duties for Intrepid. We all piled into the provided Tuk Tuks and were driven through town and out to the far edge, stopping in the dark outside a stilted building. Led inside we were sat around a large mat on the floor of the living area. This was a simple building, basically two rooms with the larger the sleeping, eating and living room with the other being the kitchen, larder and wash room. The floor has bamboo over the wooden frame and we could feel the breeze running between the gaps in the floor and walls.

Dinner was bought out as a number of large dishes filled with lovely food, Cambodian curries, vegetables and salads. It was probably the best meal of the trip so far and we all ate loads (though not enough that we ate everything). We were treated to some spider wine, a local alcohol spiced with real spiders. Luckily we didn’t get to see the spider, not so luckily we all had a small shot of the reasonably foul liquid. The liquid also comes in snake and monkey varieties though these are now illegal apparently. 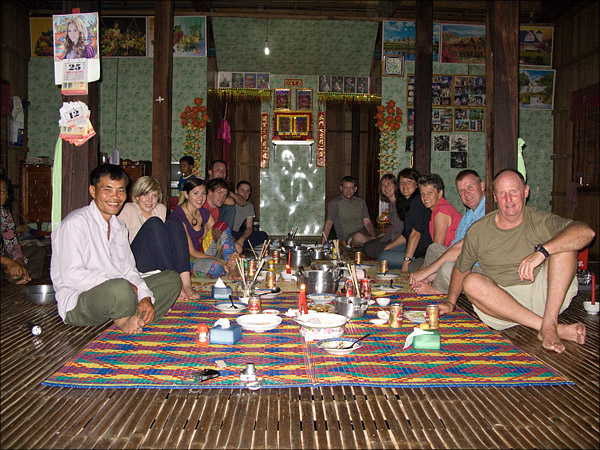 The remains of dinner.

Replete we lay down and relaxed while listening to stories of local life and answers to the occasional question. During this time a gecko decided life on the roof wasn’t interesting enough and dropped onto Keryn, running the length of her body before disappearing somewhere in the room. With the cool breeze and the pleasant lack of biting insects it was a chilled out evening and we let for the hotel feeling relaxed and content.