After the storm of last night we were not expecting a warm or sunny day so we took our time to leave the B&B this morning. It was getting on for midday by the time we left and drove off towards the beautifully named Half Way Dump. Arriving at the Half Way Dump (which is just part of the Bruce Peninsula National Park, not some rubbish heap) we paid the parking fare and then headed off down the path to the lake shore – a 15 minute walk.

The shore on the east side of the peninsula tends to be rocky from what we’ve seen, here the beach consisted of rocks that tended to be about brick sized, with a softened shape that took in discuss through egg varieties. Following the shore line north we came to a section of harder rock, mostly in one piece that is slowly being eroded away by the water. The rock was stepped, the erosion happening in such a way that it looked like someone was taking randomly sized chunks away in rectangular blocks. We took a few photos and then headed back to the car once the nasty biting flies got too much. 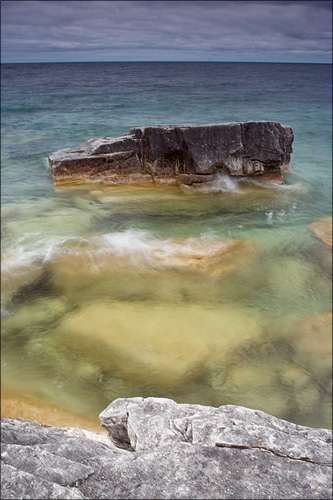 The rocks being claimed by the lake

We walked back to the car, regularly inspecting each other for flies. By the time we were back at the car they seemed to have all gone. Apparently earlier in the season it’s the mosquitoes and black flies that are the problem. Into the car we were heading back to Highway 6 but stopped after a short while to get a few photos of the lush looking forest. The previous nights rain had left the trees glowing with moisture, a stark contrast to the brittle dryness of the previous few days. 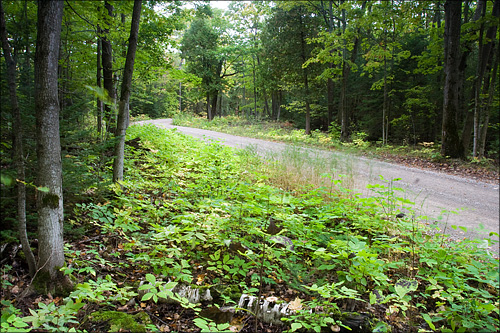 The forest of Half Way Dump

Photos recorded we headed back to the highway and then north on to Tobermory. We had decided that today was the day to take a cruise out to Flowerpot Island. The original plan had been that Keryn would do some diving out over some of the many wrecks in Lake Huron but our midweek arrive coupled with the end of the season meant there weren’t enough people to run the trip so we would be staying above water this time. The cruise was booked for mid afternoon and we then wandered the town looking at a few shops and finding something for lunch.

Our fish and ships eaten it was time to head down to the boat and board for the cruise. There were 18 people on board and as the top deck alone could take up to 47 people there was plenty of room for everybody. The boat was fitter with underwater viewing portals and we would be sailing over two wrecks on our way out to the island. We headed off and soon found in ourselves Big Tub harbour peering over at the two wrecks while the ship slowly manoeuvred to give various views of the rotting hulks. 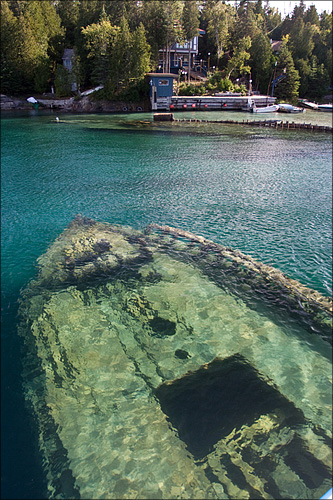 A wreck in the Big Tub harbour

With the wreck inspection complete we then headed back out into the lake and past the two Otter islands (north and south) it was full steam ahead to Flowerpot Island. When the lake is higher it is possible to get off on Flowerpot Island and walk around – or even camp overnight in one of the 6 camp sites. With the low water level this wasn’t an option so we sailed past and were given some history of the island and the lighthouse keepers who used to be resident. Coming around the Island we saw the two flowerpots, large rock formations that fluted up from a narrow base to a wider flat top. Visit complete it was then straight back to Tobermory and the end of the cruise. 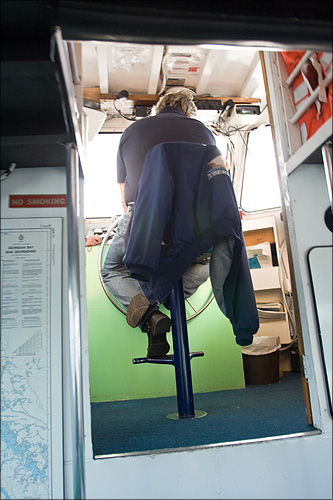 Captain at the helm

On land once more we headed to the local store and stocked up for lunch the next day. We then drove around the town and ended up at the lighthouse looking over the entrance to Big Tub harbour. I took some photos and Keryn tried to stay in what sun she could find. 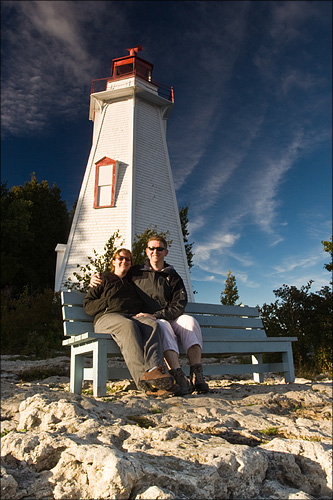 Once I was done we drove back into town and had dinner at the local pub, burgers this time. Tobermory doesn’t seem to be overflowing with restaurant options but the simple meals we had were all tasty and reasonably cheap – just a little uninspiring I suppose. The sun was setting as we got back to the car and drove back town Highway 6 towards Miller Lake. There was one more stop so I could get some sunset shots. I saw something swimming through the water of the swamp we had stopped by and called Keryn to have a look. She didn’t see the animal (it was either an otter or a beaver) as it went underwater as a large heron swooped in. Keryn did see the large swarm of midges that descended over the and quickly took refuge while I kept an eye on the swirling black cloud as I took photos. 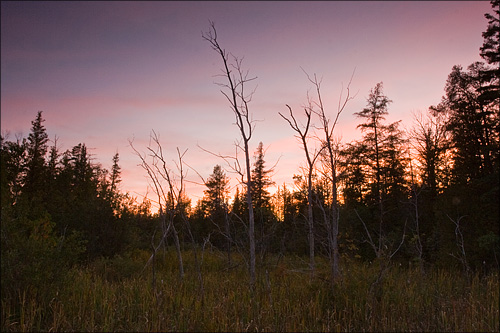 A fading sunset over the roadside swamp

On the drive home we disturbed two young raccoons that were looking to cross the road. After a bit of indecision they headed back into the undergrowth. We haven’t seen much in the way of road kill on this trip – one skunk and a squirrel is it I think. Maybe there just aren’t as many cars or people driving at night when the plentiful animals are out and about. Back at the B&B we put on a load of washing and once that was done it was off to sleep. 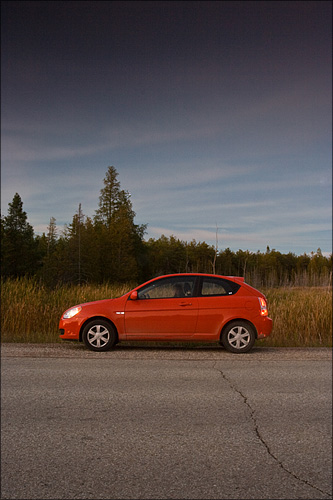