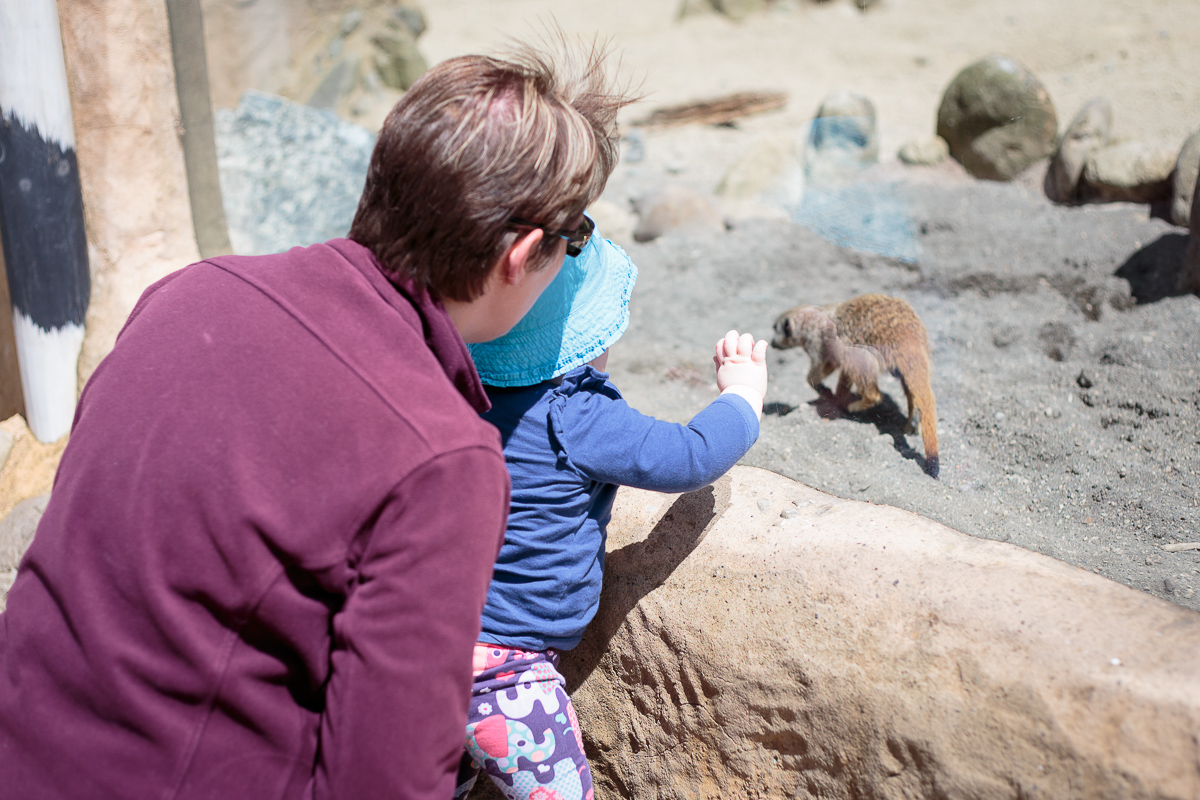 Alayna is fast becoming a fan of the natural world and becomes quite entranced with animals. Our cats are definitely a focus of attention and when there are birds outside Alayna will sit and watch with interest. When we visit Zealandia its obvious that Alayna is getting more and more interested in the fauna and flora. We’ve been to the zoo previously and Alayna wasn’t that fussed so we thought we’d take another visit and see what happened.

It was a beautiful warm and sunny Saturday morning and the zoo was full of happy people and comfortable animals. We paid a visit to Tahi and the other kiwi and then were soon walking past the tamarin enclosure. Alayna was happy watching a tamarin lying in the sun but was more interested in her current favourite animal, a duck. The nearby pelican also drew her eye “duck duck duck!”.

With Alayna’s interest in our cats we made sure to visit the tiger enclosure for the feeding and keeper talk. Alayna can say cat but more often will just make a meowing noise instead and the first sight of the tiger got her loudly meowing and making the odd growing noise. The talk interesting and the young female tiger was eager for her tidbits of food as she stretched up against the fence, dwarfing the keeper.

The giraffe proved to be somewhat less interesting though I’d like to return one day for the feeding, I think Alayna would find a giraffe pulling a leafy branch with its tongue hilarious (or perhaps frightening, but I’ll hedge my bets on hilarious).

There were a few stops to inspect leaves and flowers. There is less grabbing and more pointing these days and Alayna especially likes to see and study movement, possibly from watching the often blustery wind at home blowing through what few small trees we have in our front yard.

In the new meet the locals Australia area Alayna liked seeing a Tasmanian devil shuffling around its area and then took interest in a lizard sunning itself. I was hoping we’d see the emu close up as when we last visited but it appears they may have been moved out of the public area.

The meercats proved a favourite even if they were just moving slowly around rather than really bustling with the madcap hijinks that can sometimes be seen. It was around midday and rest seemed to be the preferred state for the majority of the meercats we could see.

At the chimpanzee area we good to see a distant view of a baby chimp born the previous day. The mother was protective and took a high spot to relax with her new arrival. Most of the rest of the chimps were also relaxing, taking in the welcome heat.

Alayna stayed interested and happy well past her usual sleep time which was a good sign of enjoyment I think. WE had some lunch at the zoo cafe and Alayna was quite content to play with in the kids area with the building blocks that were strewn around. I’m pretty sure we’ll be signing up for annual memberships at the zoo in the coming years.