We attended a talk where Neil Gaiman was the subject this evening at the Criterion Theatre in central London. Neil was interviewed and read a little from Stardust which has it’s London premier tomorrow night. There were questions from the audience and I got to ask if Neil would like to write an episode for Doctor Who, to which he replied that he would love to if asked but he already has other plans brewing with the BBC, something to look forward to. Afterwards there was a signing and along with Danny from work we managed to get to the front of the queue and get some books signed. 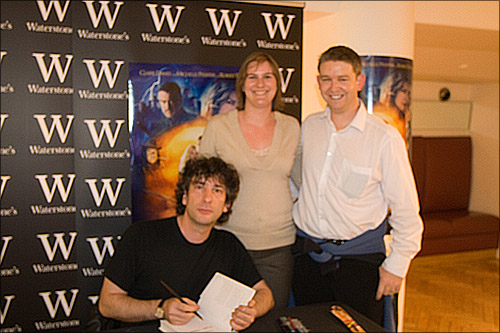 Neil Gaiman signing for Keryn and I

My camera jinx struck again, the camera not focusing correctly (something which has been happening quite a bit recently). So you get a slightly blurry and soft photo.