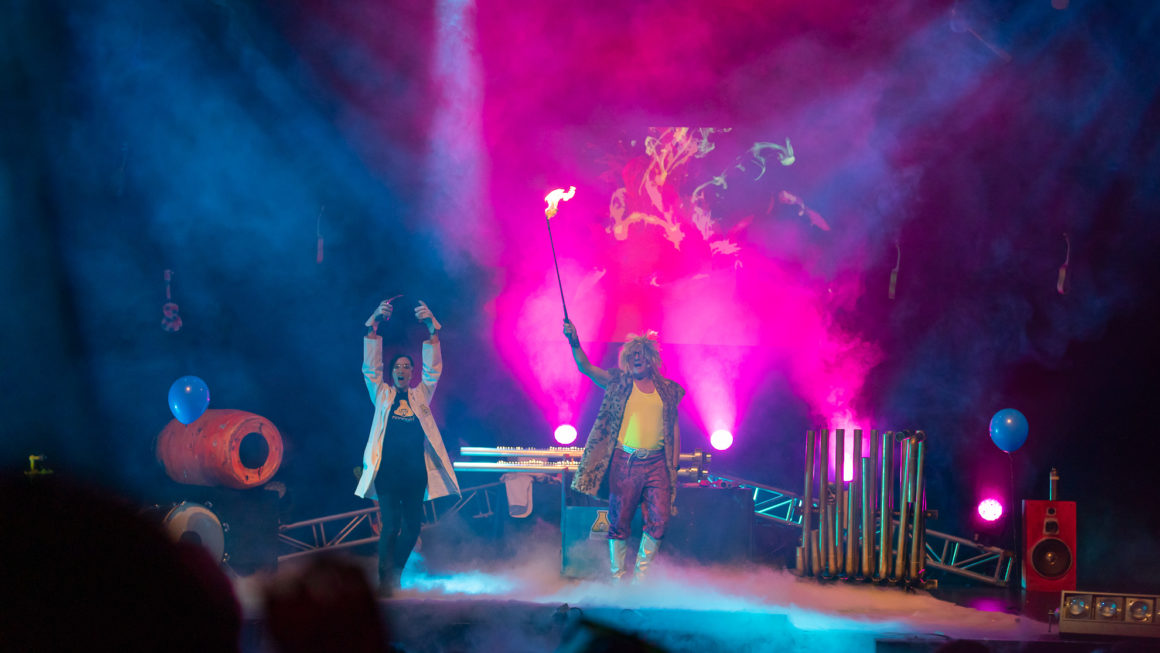 The blurb for the latest Nanogirl Live! show – Bring on the Noise! – said ” In this interactive show filled with experiments, explosions and music – Nanogirl Live! brings science and engineering to life in the coolest ways possible, right before your eyes“. Over an entertaining hour we watched Nanogirl and her trusty assistant Boris, along with quazi-AI CLAIR (Constantly Learning Artificial Intelligence Repository) bring science experiments wrapped up in fun and there were lots of learning experiences that resulted in larger than life events on stage. Balloons were ignited in ever increasing bursts of colour and sound, a repurposed barrel became a giant smoke ring spewing gun and bowling balls became a huge newton’s cradle.

As last time we saw a Nanogirl show in Wellington the event was held at the Opera House, but this time around we’d got better seats and were a bit closer to the action. We were joined by friends and had purchased VIP tickets for the girls so had the added bonus of some free stuff and a more intimate behind the scenes experience with Boris after the show, followed by a chance to meet Nanogirl and get a photo taken. One of the gifts in the bright yellow backpack was a magnifying lens with light that clips on to a cellphone and that provided some entertainment later on when we went and got dinner, close inspection of everyday objects and hands showed some cool details.

All up it was another great experience, and we’ll go again next time Nanogirl is in town. Alayna has been watching Nanogirl and the Imaginauts on HeiHei and also enjoying the occasional experiment at home inspired by The Kitchen Science Cookbook and its related HeiHei show. We all enjoy what Nanogirl is doing with science education in New Zealand, long may this continue, and if you get the chance to experience one of her shows then go, you won’t be disappointed 🙂