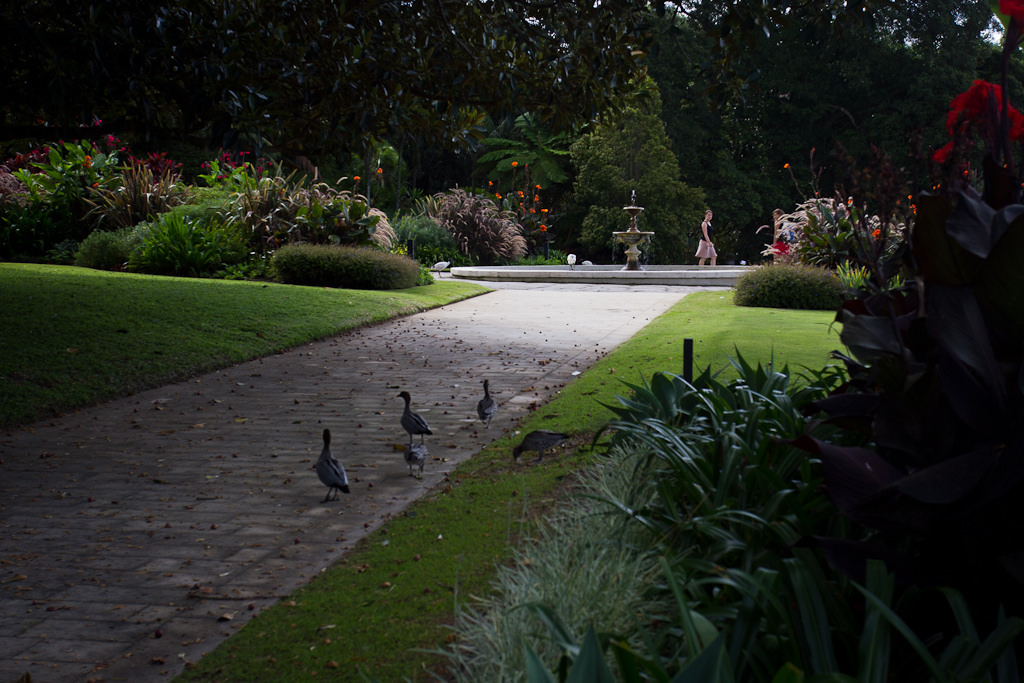 Recently we travelled over to Australia for a bit of a holiday. The trip was long planned with some last minute changes when we found out that good friend Roger was getting married in Sydney. Not having visited Sydney before we had plenty to explore and we arrived with a lot of luggage and no real plans other than getting out to our accommodation near Bondi Beach.

The flight was good and our baggage showed up with no problems. We sat down at the airport and figured out some travel plans, choosing to get to Bondi via train and bus rather than the more expensive (but in the end not that much more) taxi or shuttle options. It was somewhat awkward to carry around our heavy backpacks, especially on the bus, but we arrived with minimal issue in Bondi and found the apartment building.

Bondi Services Apartments are not top class accomodation, but I was expecting some rough edges. The building manager was a somewhat strange man, reading reviews on Trip Advisor had prepared me for someone a little different and prepared we had no issues. Turns out his wife is a Kiwi and he spent some years living in Kamo so we (well Keryn and he) had some common ground. Our room was clean and tidy, the bed was comfortable enough and there was air-conditioning. On the negative side there was a view of tin roofs and scaffolding out the back and when inspected the windows had no locks on them. The curtains stayed closed for most of our stay.

Sam and Jules were due to arrive in the evening while Eleanor and Aaron had already arrived from Melbourne. After unpacking and having a bit of a rest we walked down to Bondi beach to find the bar where Eleanor and Aaron were having a few drinks. It was good to catch up and the viewpoint was excellent, looking over the road and down to the beach. We had some food and a few drinks, chatted and talked about the forthcoming wedding. Done we departed and headed into the city for a bit of sightseeing.

We walked around from the Botanical Gardens past Government House and on to the Sydney Opera House and a view of the Harbour Bridge. We didn’t have a lot of time but at least we’ve visited now. We then had a look at the ferry timetable and decided to take the shortly departing Manly Ferry to get some good harbour views and have a look at Manly beach. 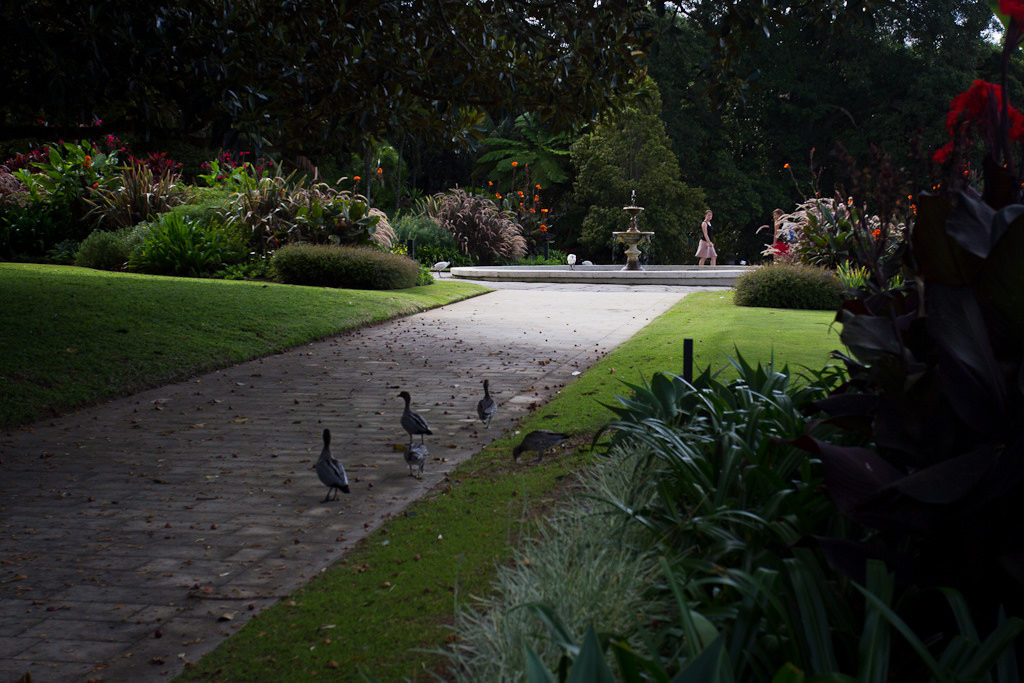 Inside the grounds of Government House. 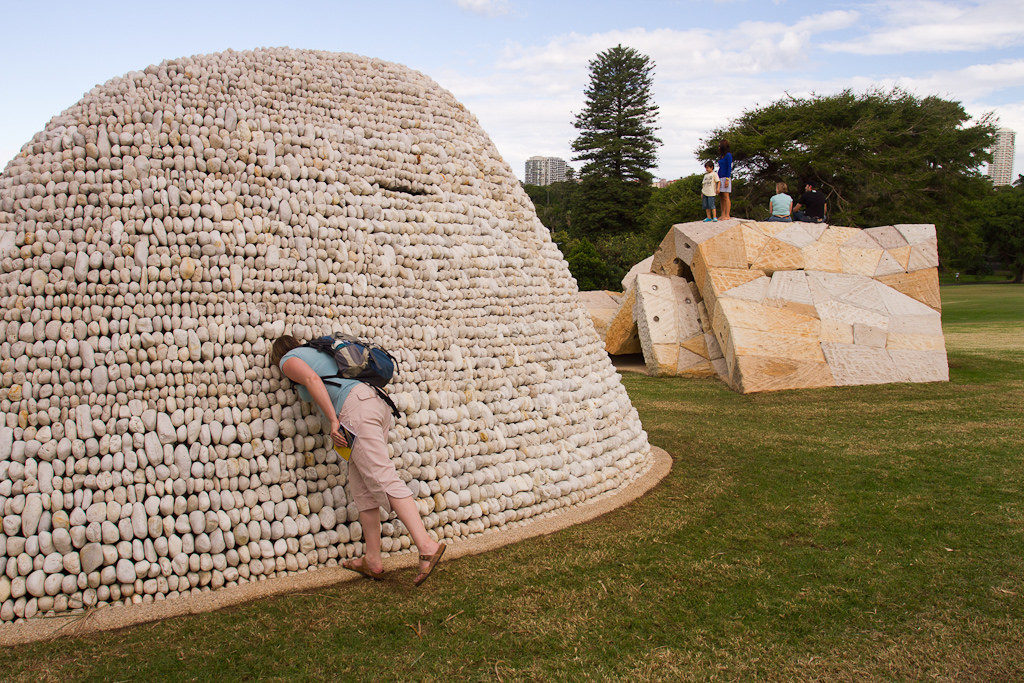 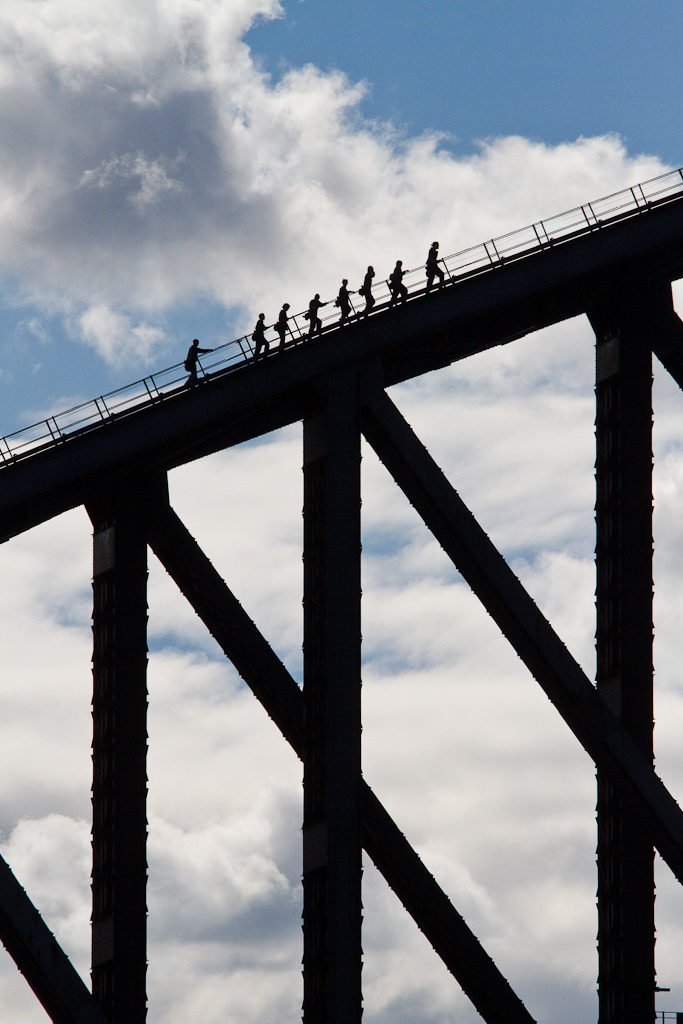 Looking to people climbing the bridge. 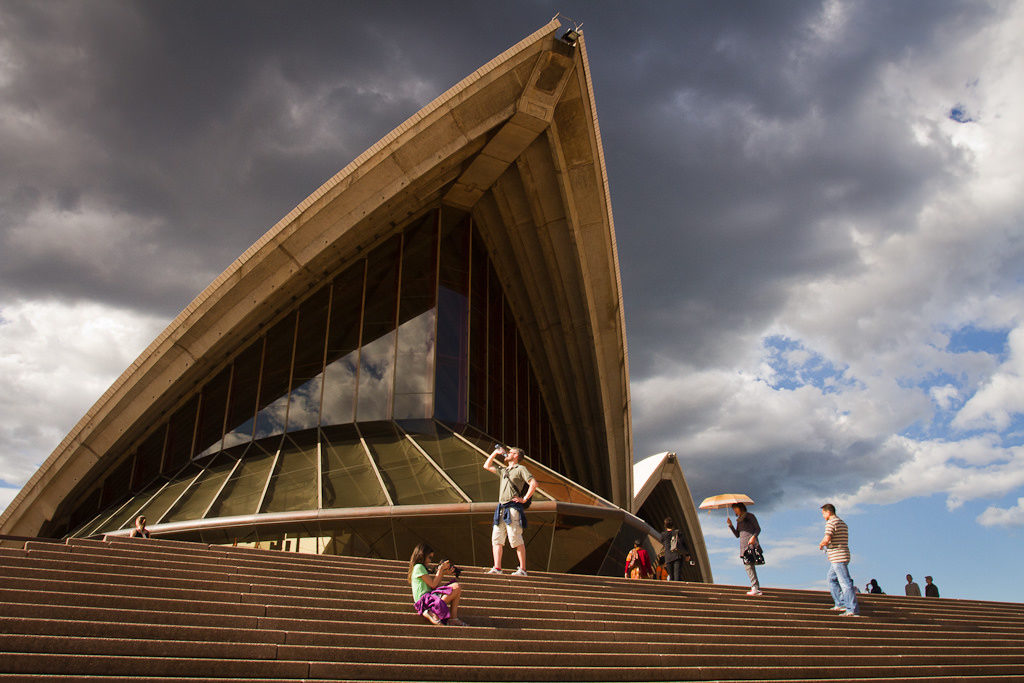 The sun comes out. 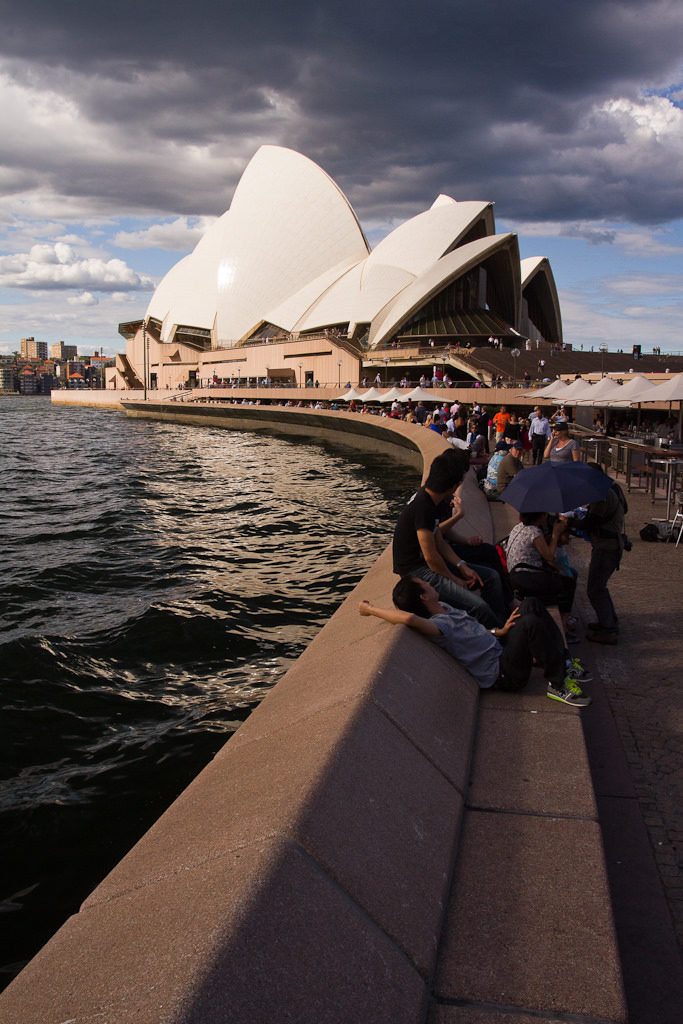 Looking back as we head to the ferry.

As we travelled over the harbour, followed by a large cruise ship, the clouds were coming in over the city. We saw a wedding taking place in a pretty cove and around the corner of the peninsula others were fishing in the shadow of a small lighthouse. The Manly ferry was a large, multi deck ship and we were passed by sleeker, smaller boats ferrying people in suits drinking their beer and wine. Before long we were disembarking and walking out heading towards the beach.

There was a small international food festival taking place across the road from the ferry building and next door on a grassy area a school band played while families ate their food on plastic tables and chairs. Lights were strung up in the trees overs the grass and the atmosphere was warm on this grey evening. 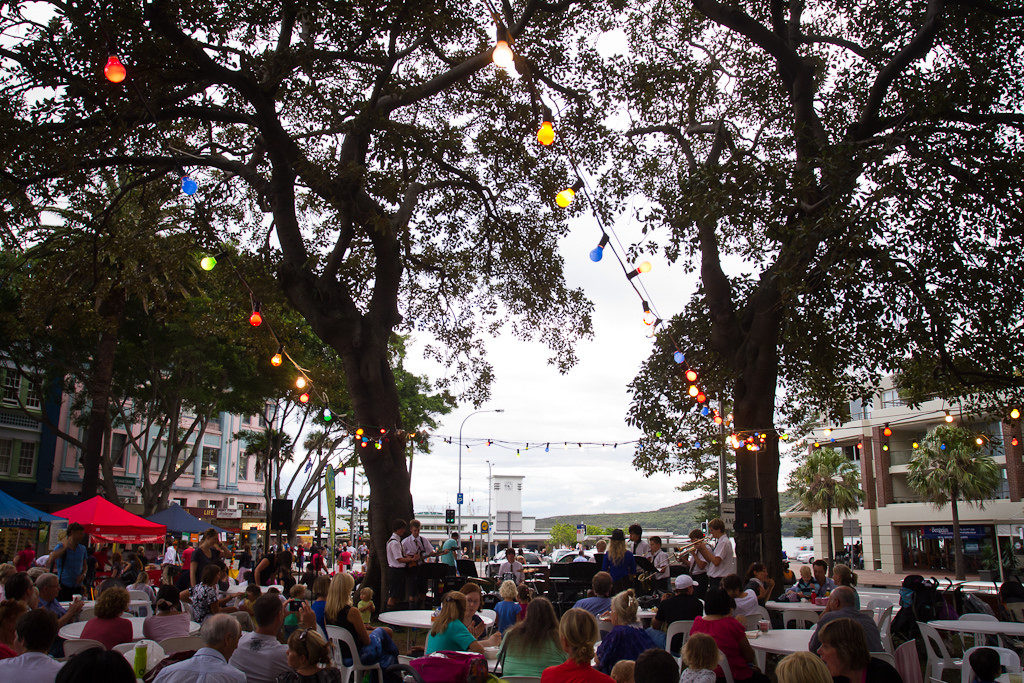 The band plays while everybody eats.

We walked to the beach and then back again, stopping to have some food from the market. Then it was back onto a ferry heading back into the city, the sky looking ominous as we hoped it didn’t start raining. 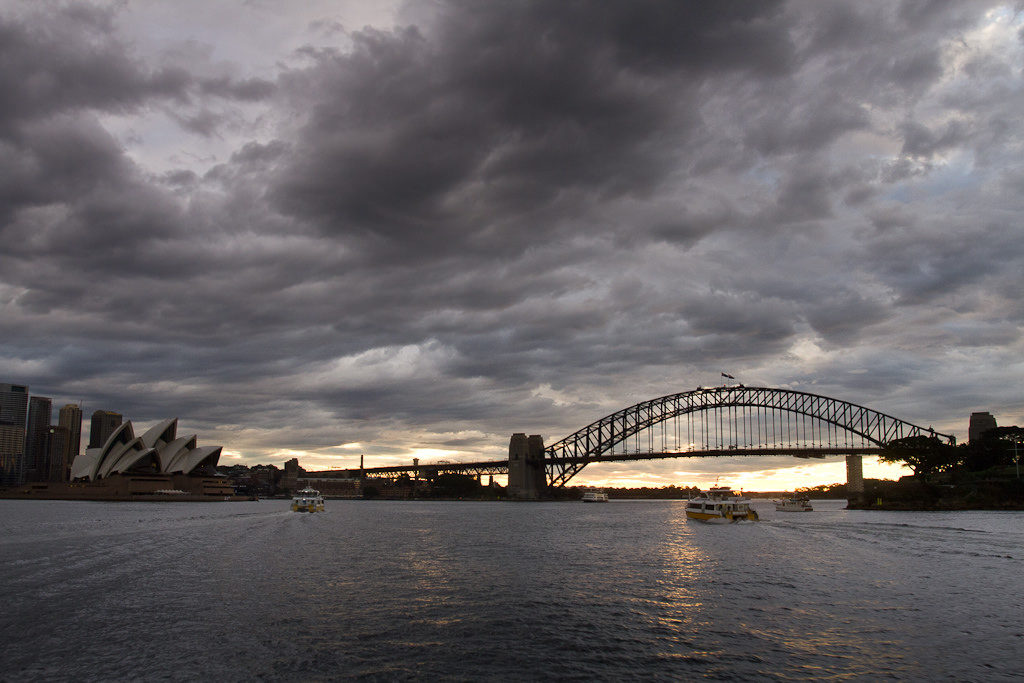 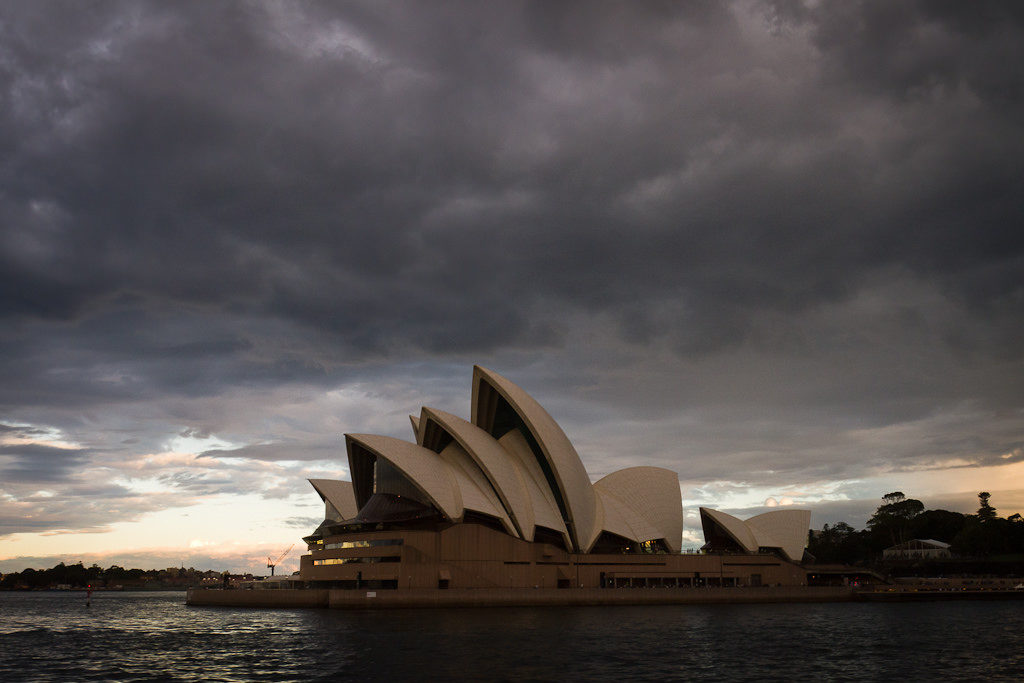 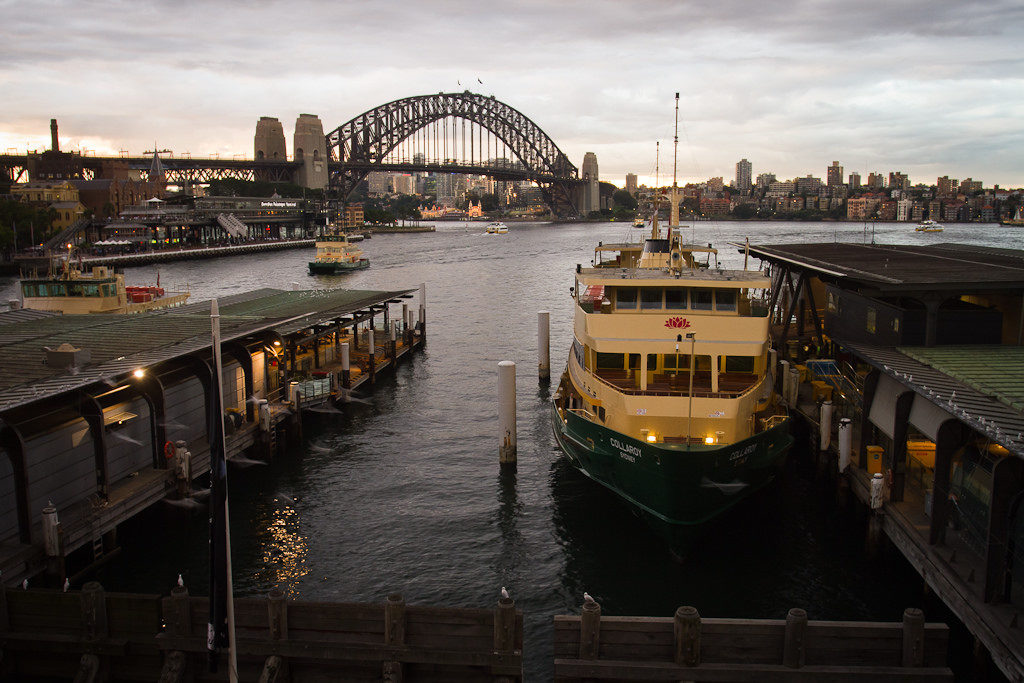 Looking back as we wait for a train.

The rain didn’t come till well after dark. Back in Bondi we headed out to find Eleanor, Aaron, Sam & Jules at a restaurant where Roger and Kate were also eating with their parents. There was further catching up and a few nervous glances outside as the rain started coming down. It wasn’t looking good for an outdoor wedding the following day.