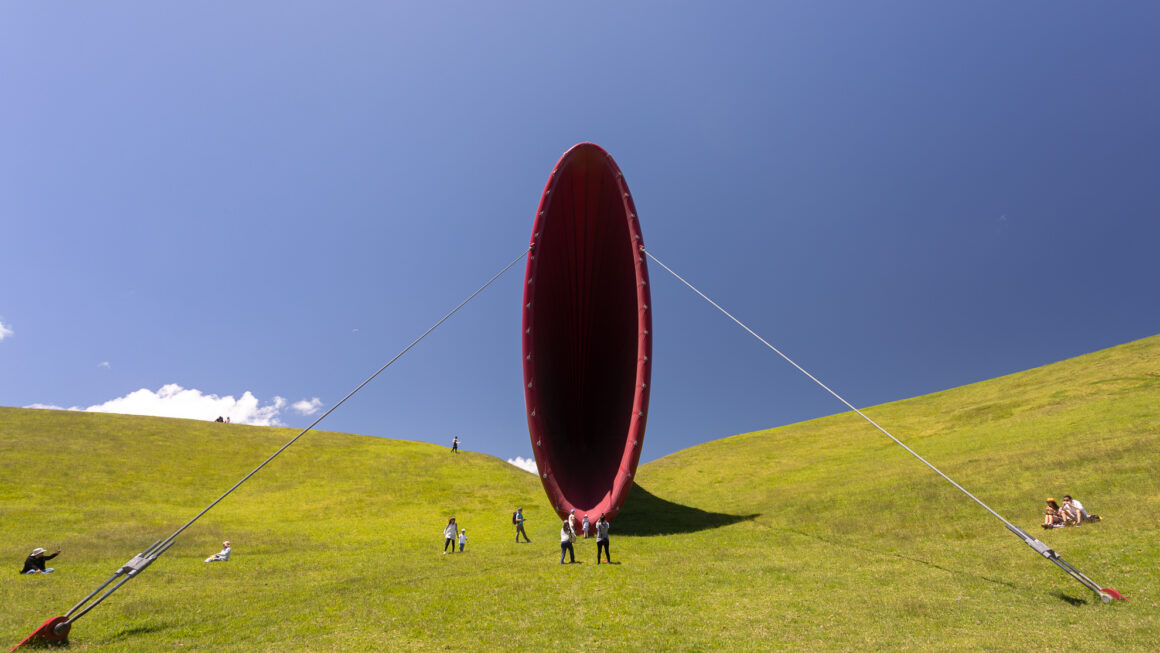 For years now I’ve had a monthly reminder in my calendar to check for availability to visit Gibbs Farm, a sculpture park featuring a large number of mammoth commissioned artworks situated north of Auckland on hilly farmland adjacent to the Kaipara Harbour. Earlier this year I was surprised to find some dates available in November 2020 so I booked some free tickets and then set about convincing Keryn that a holiday to Auckland would be a good idea. And so we found ourselves heading north for a 4-day weekend with Keryn’s parents, brother and Travis’s partner joining us on the Gibbs Farm excursion.

When booking so far in advance for a visit to somewhere outdoors with no postponement date there is always a worry about the weather. Thankfully we were lucky to get a warm, sunny day with a light southerly breeze helping to keep the temperature manageable. Our family members all rendezvoused at the farm and with Alayna leading set off uphill to start exploring. Out first stop was at the Richard Serra sculpture called Te Tuhirangi Contour, a huge and sinuous steel wall that flowed for 252 meters along the contours of the hill. Here I tried to get a family photo but Alayna wasn’t interested, so instead I got a Bainbridge family photo while Alayna explored a nearby tree.

As well as spectacular sculpture there was a surprising variety of livestock and more exotic animals. There were a half dozen different types of cattle (bison, water buffalo, longhorn and others), a large herd of alpaca free-roaming along with emu wandering around like they owned the place. There were also ostrich, zebra and giraffe, a few different types of sheep and goats and deer. The ponds had fish and we also saw an eel briefly rise to the surface before disappearing when it saw us watching. The giraffe are the only remaining rothschild giraffe in New Zealand and Gibbs Farm is a registered zoo with suitably qualified staff taking care of all the animals. We got to watch the youngest of the three giraffe, now 14 years old, eat while we stood only a metre away. Its obvious that giraffe are large animals, up close its still surprising how massive their head is.

The sculpture Horizons by Neil Dawson wasn’t the largest but was a focal point on a prominent hilltop. The artwork drew the eye with its trick of shape and perspective, a constant question as to whether the sculpture existed in 2 or 3 dimensions. Later in the afternoon as the people disappeared from the sculptures the farm animals returned, at Horizons the bison that had been behind the hill came to the top, reclaiming their space and the view it afforded.

There were dozens of artworks to explore from the constantly changing fountains in one of the farm ponds to the coloured blocks (Red Cloud Confrontation in Landscape by Leon van den Eijkel) next to another pond, this one largely covered in water lillies. A construction of breezeblocks brought to mind a pyramid, though it wasn’t a pyramid shape unless viewed from the end (Pyramid (Keystone NZ) by Sol LeWitt). Four monolithic towers rising high in the sky (Sentinels by Andrew Rogers) and also a spire created out of bound wood rising to point. All were interesting and sat within or above the landscape, reflecting that each is a commissioned piece created for its location.

My favourite sculptures were 88.5° ARC x 8 by Bernar Venet and Dismemberment, Site 1 by Anish Kapoor. The enormous steels arcs are the most obvious artwork visible from the road when driving past and the artwork that most comes to mind when I think of Gibbs Farm. Dismemberment however is the most iconic, the huge red tunnel bisecting a valley and inviting interaction, the many children on site could not help but drum on the fabric and feeling the vibrations as they travelled along the taut skin stretched over the unlikely steel frame. We ate lunch in the shadow of the tunnel and then wandered around and underneath exploring the shape and size of the sculpture.

The 8 steel arcs in contrast were solid and at the same time seemed to float up from the landscape. The orange/red of the rusting steel a dramatic contrast to the bright green grass and vivid blue sky. Alayna seemed to become a dot as she stood below the towering arcs.

Visitors were allowed 4 hours to wander the farm and it took that long to get around most of the sculptures. While there were hundreds of people in attendance it never felt too busy, if one sculpture looked a little overrun it was easy enough to divert elsewhere and wait for the crowd to disperse. After waiting for years to visit Gibbs Farm did not disappoint and it was satisfying to finally get up close with sculptures, the variety of animals being a nice surprise. It will be nice to visit again one day, perhaps at a different time of year. There are also some sculptures that are only visible or active at night, maybe we’ll get to see them sometime as well.

One of the last sculptures we saw was Jacob’s Ladder by Gerry Judah, a delicate looking twisting tower that is actually made of stacked length of steel, another piece that is light on the landscape and becomes something more than its simple pieces. One day perhaps we’ll get to spend more time with the artworks, or perhaps multiple visits under different seasons and weather conditions will provide new perspectives. And no doubt there will also be further sculptures rising from the landscape over time to be admired and wondered over. Next time then, we will be back. 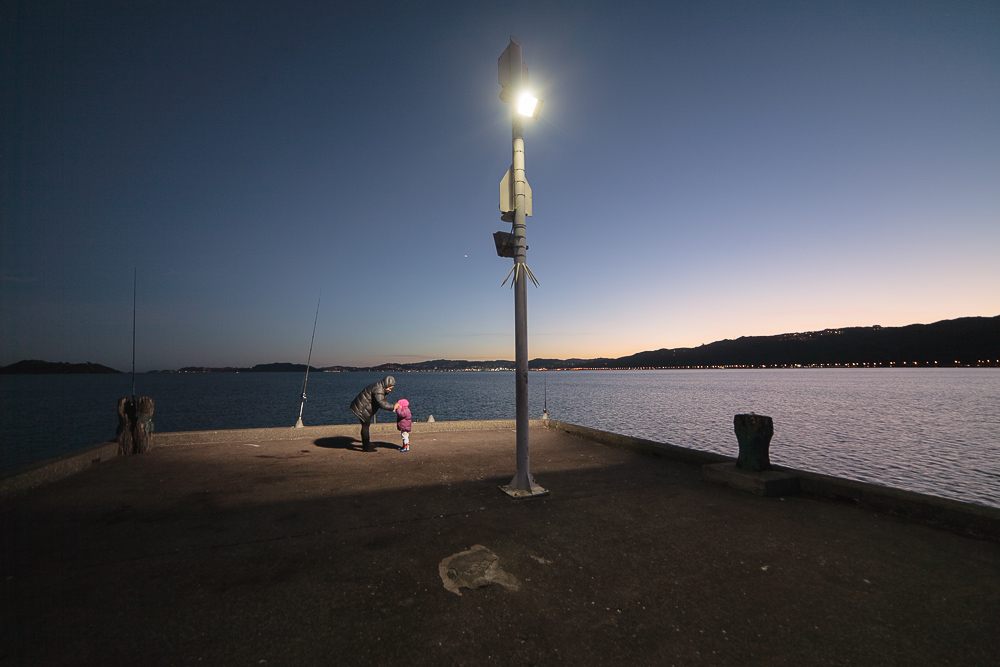 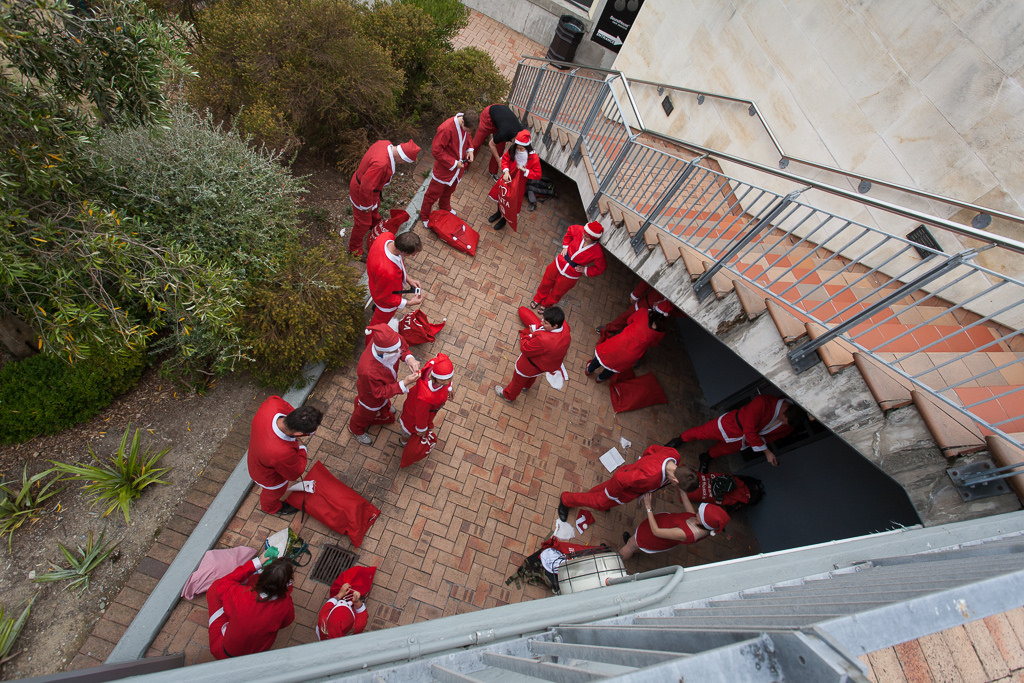