Out whale watching trip was booked for 7.45am so I figured up get up extra early and see the sunrise. The weather looked good as I walked across the railway lines out the back of the hostel and went down on to the beach. I watched as the snow capped mountains turned pink with the rising sun and then watched the sun crest the horizon, a beautiful start to the day. 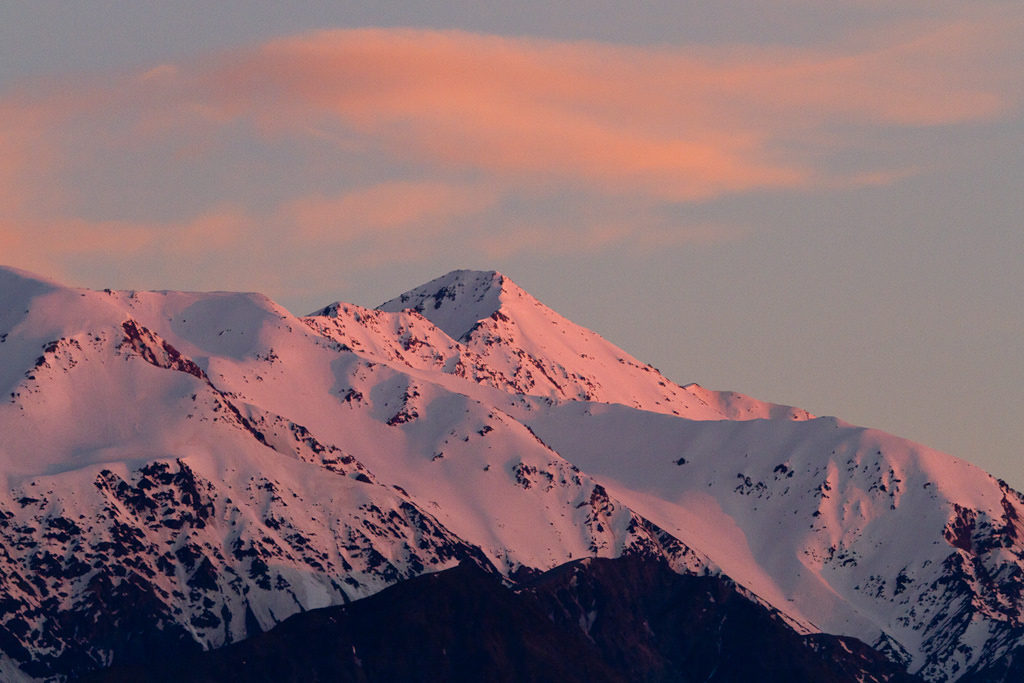 Sunrise reflected in the Kaikoura ranges. 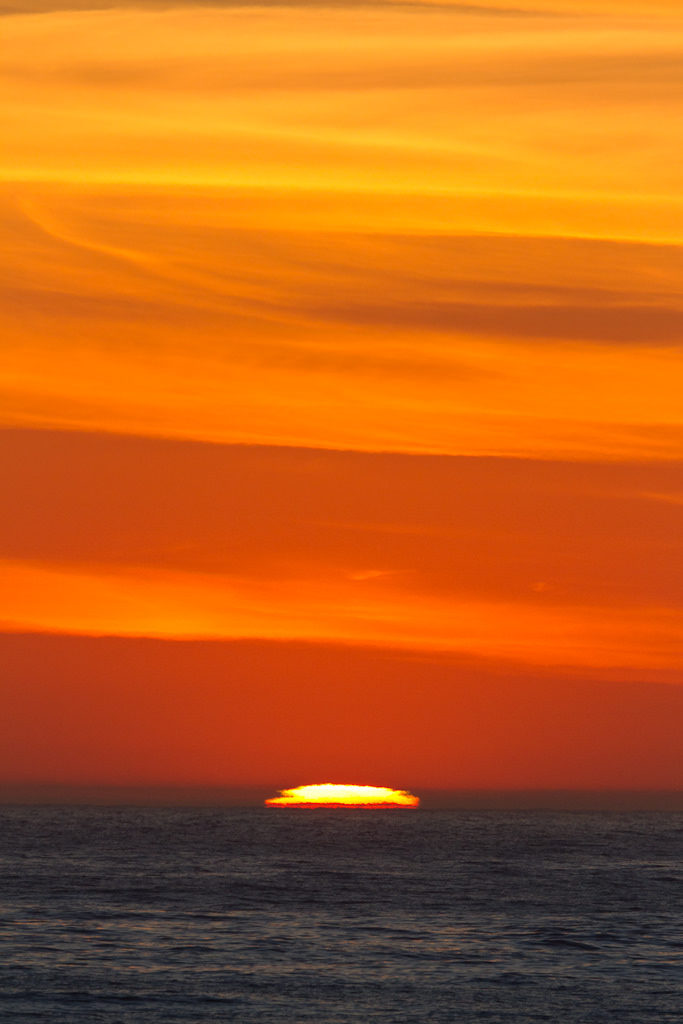 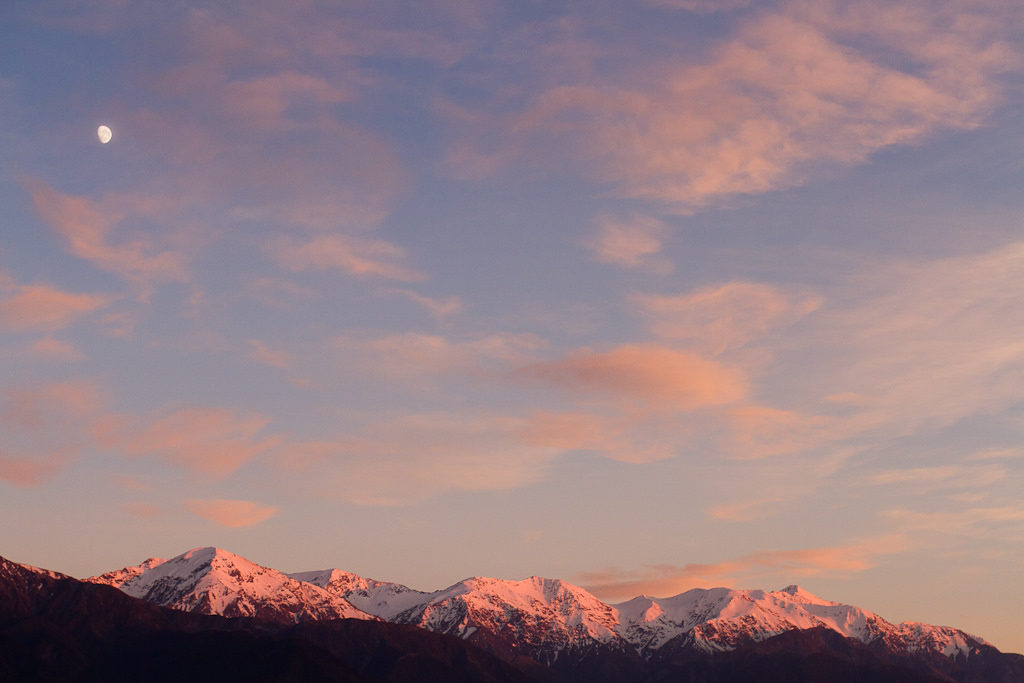 We had breakfast and then walked back over the tracks down to the Whale Watch centre for check in. It was still a lovely morning with little wind and the sea looked calm. In spite of this we were warned that there was a strong sea sickness warning for the mornings sailing and also informed that not many whales had been seen recently, perhaps related to the increased seismic activity following the Canterbury earthquake. Forewarned we watched the introductory video and then boarded the bus transporting us to our boat.

The low swell out on the water turned out to be perfect for pitching the boat about in a slow rocking fashion and it didn’t take too long before there were people changing seats so they could be in the somewhat less bumpy seats near the rear of the boat (with their sick bags, happily swapped out once used by the happy crew). As Keryn succumbs to seasickness fairly readily on medium to large boats we were already sitting at the back. We headed out to sea and then northwards searching for whales, stopping every now and again so the skipper could put a large sounding device into the water to listen for whales calling (the Whale Watch Kaikoura tours don’t use sonar as it can effect the whales navigation). Heading south was another boat and eventually they found whales but by that time we were many miles north and weren’t going to have time to travel to see them. So we didn’t see any whales, nor any dolphins. We did see a few albatross and other bird life but all in all it was a disappointment. 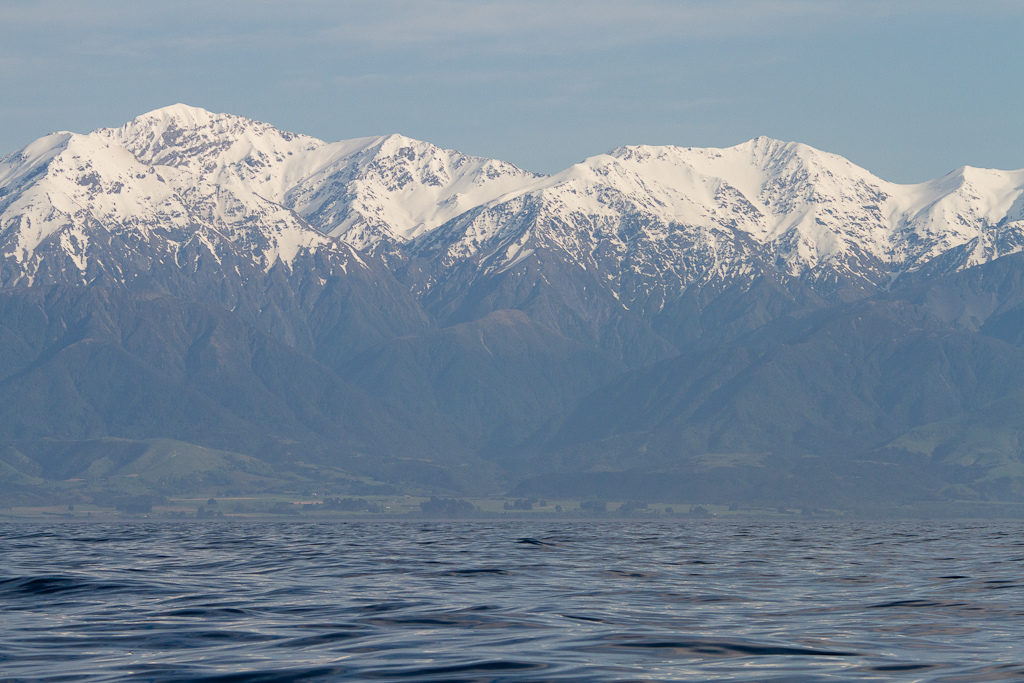 Kaikoura Ranges from the sea. 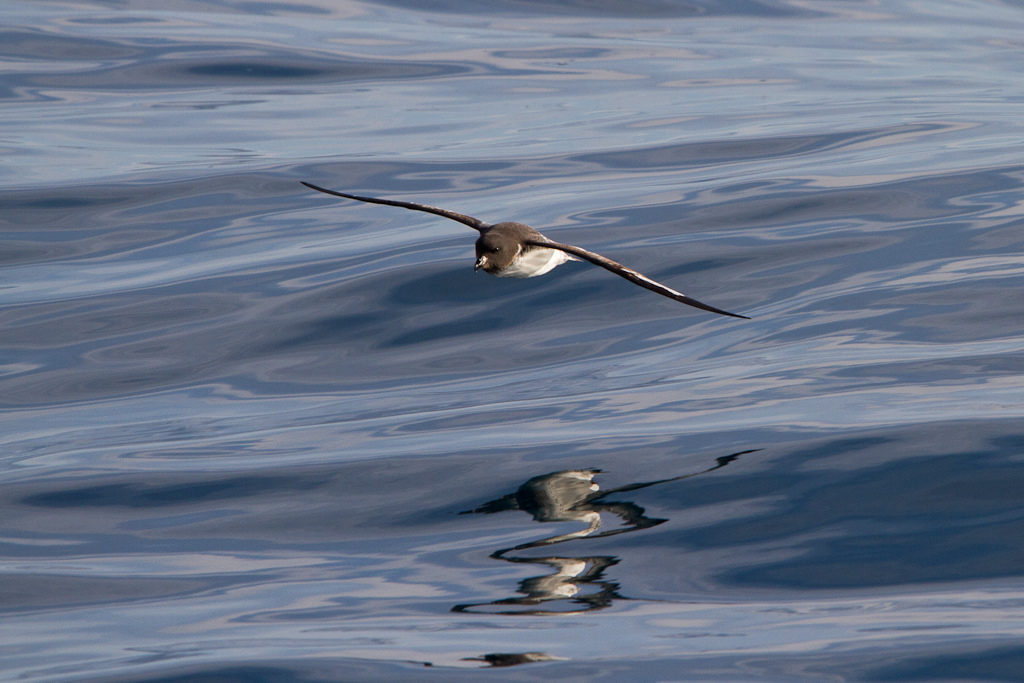 Floating above the silky water. 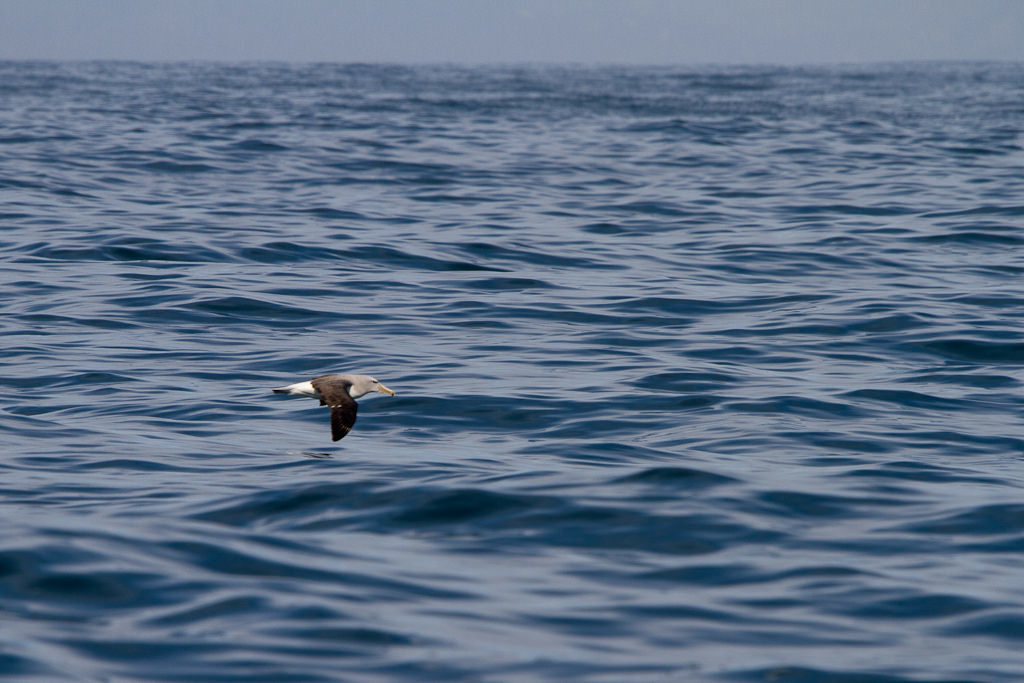 Distant albatross (I think its a Salvins Albatross).

I have a theory that our whale watching experiences have been tainted by the success of our first ever trip which was at Kaikoura sometime in the late 1990’s. We saw lots of sperm whales, pods of pilot whales, dolphins and a distant orca. Since then we’ve had very little success and I’m including our whale shark trip at Cancun in this as well. One day we’ll be lucky with the large sea life again.

Back on shore we lined up at the Whale Watch centre to get refunds or rebook on other trips. This sorted we headed outside to find Phil and Elaine in the car park. Before heading off we stood on the beach for a short while watching two Hectors Dolphin slowly travelling along the beach, at least we say some marine mammals today.

Heading north we stopped again at the Ohau Stream to see if daylight was more conductive to fur seal watching and it was. There was one fur seal playing in a pool underneath the rail bridge and six more at the waterfall pool. We also saw a couple sleeping in the stream. It was well worth another visit. 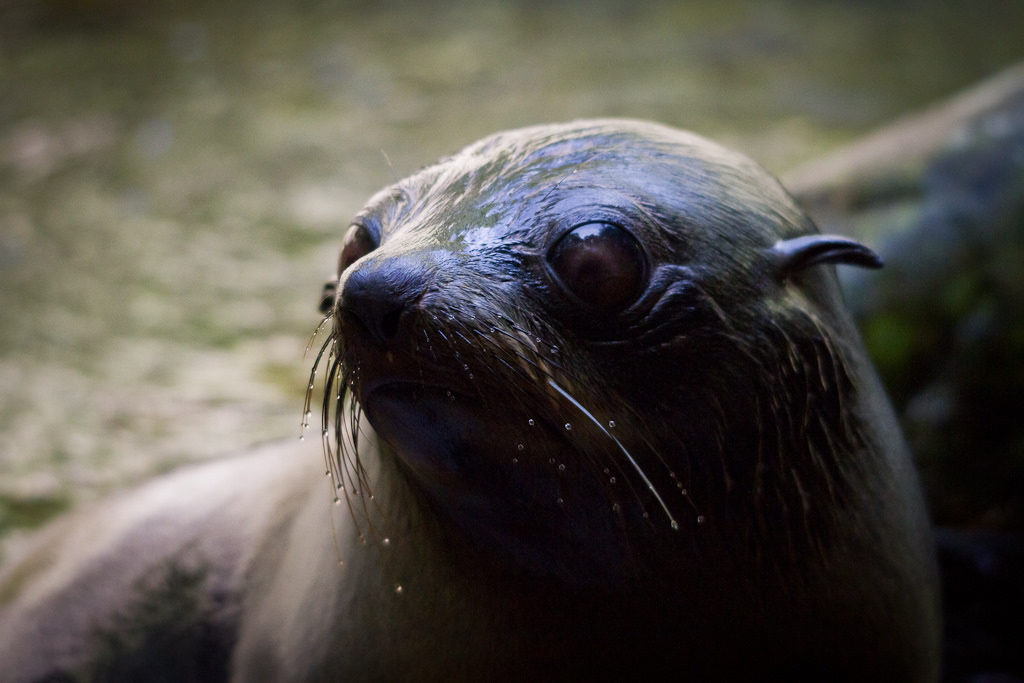 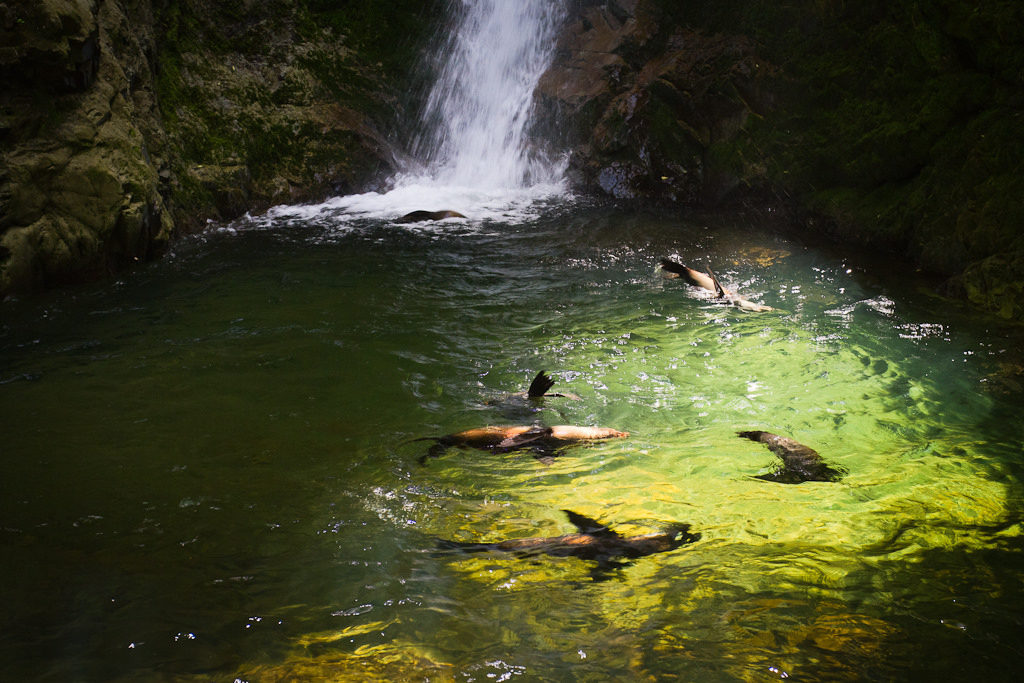 That was out last wildlife visit of the day, from Ohau Stream we continued north towards Blenheim, lunching at a roadside rest stop. We visited two wineries near Belenheim, returning to both Spy Valley and Seresin cellar doors for tastings and wine purchasing. We also visited the Makana Chocolate Shop and picked up a few treats.

Our final destination for the day was Picton and the Sequoia Lodge backpackers. The backpackers was clean and tidy, we were staying in a large room with five beds (two singles and a bunk with a double base). We ended up getting fish and chips for dinner, eating in the car while looking out over Waikawa Bay. We made sure to get back to the backpackers in time for their free desert, chocolate pudding with ice cream. Another early start the next day meant a reasonably early last night on the South Island. 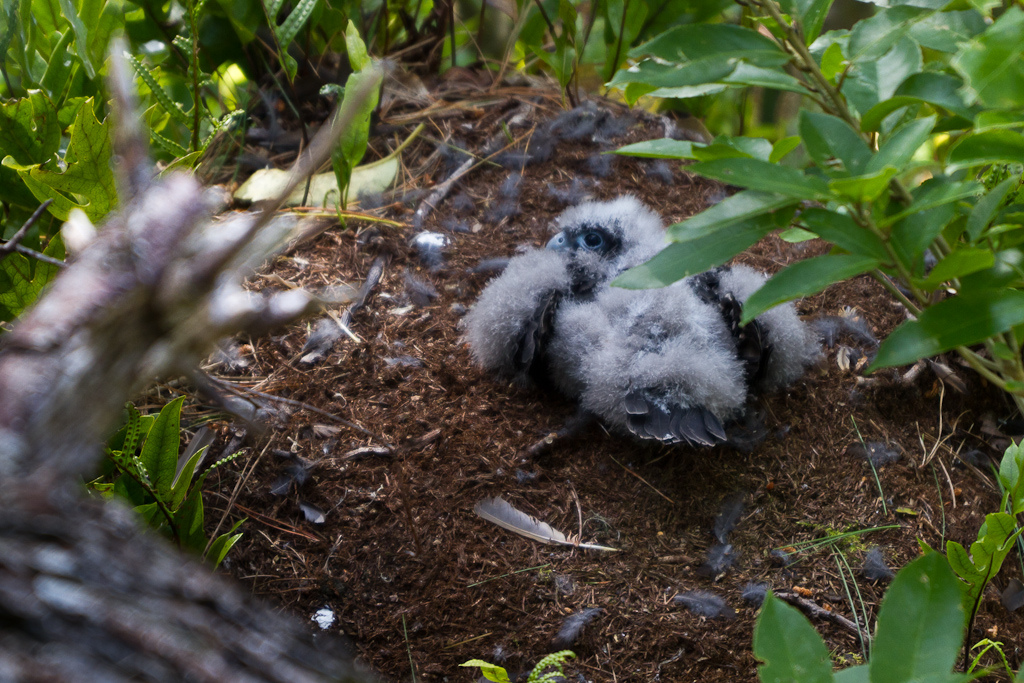