We left the hotel, our bags all stored in Elli and Vicky’s room, and were transported to the Titicaca dock on motorcycle taxis. We were to stay overnight on the island Amantani after first visiting the nearby island Taquile. For the overnight stay we would be divided into pairs and then looked after by a local family for the night. As thank you we were taken to stalls near the dock and we all bought things for our families, mainly foodstuffs and other useful bits and pieces like cooking oil, matches, pens and pencils and books for children. 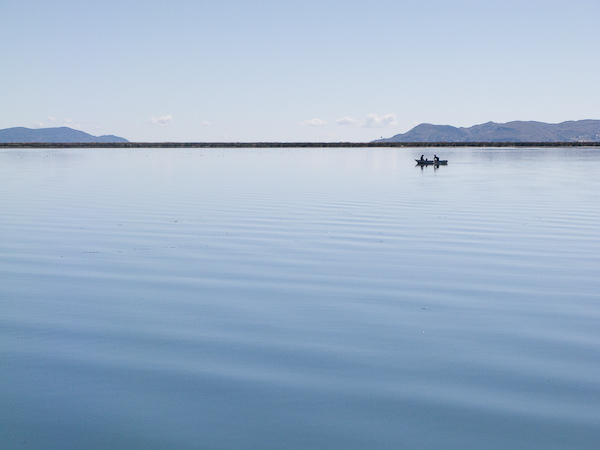 Our boat was comfortable but very very slow. It took a few hours to travel to Taquile Island and while the huge lake was pretty the view got a bit samey. Arriving at Taquile Island we disembarked and then walked a path over the island to reach the main township. The path was steep at times and with the altitude it wasn’t an easy walk for all of us. We passed by houses and terraced farmland, there were sheep about and three were on the path eating what they could find growing in between the stones of the path and the walls. On Taquile the men are known for their knitting and we passed one old guy sitting and knitting, obviously waiting for the tourists to come past. I duly asked if I could take a photo and gave a small tip. 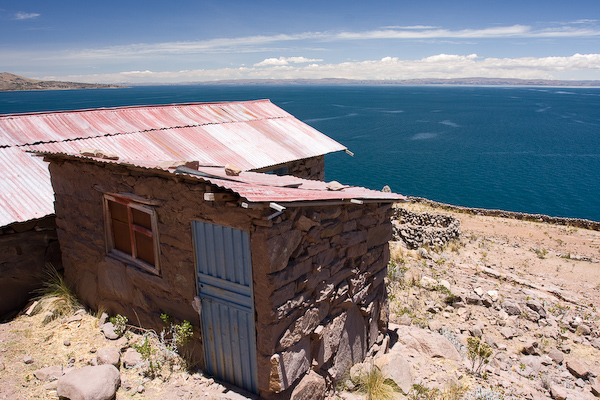 A small house on Taquile Island 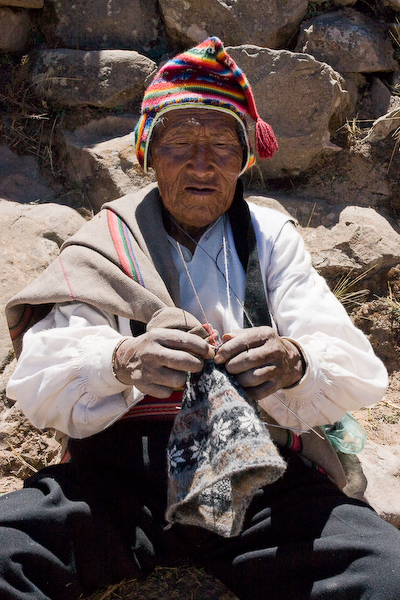 We arrived in the Taquile town and in the square our guide gave us about forty minutes to look around. There was a co-operative shop on one side of the square selling various knitted items; hats, scarves and other things. The town hall held a small exhibition of photos; the locals had been given digital cameras to record local life and the best photos were displayed. In the square there were a few locals around, most knitting, and they were all having their photo taken by the curious tourists. A few kids were playing as well, kicking a football around the square. 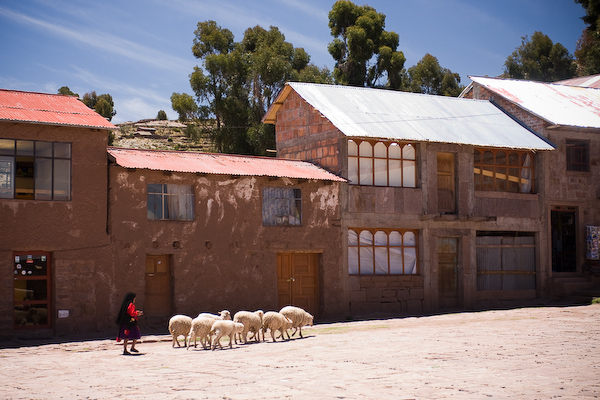 Leading sheep across the square 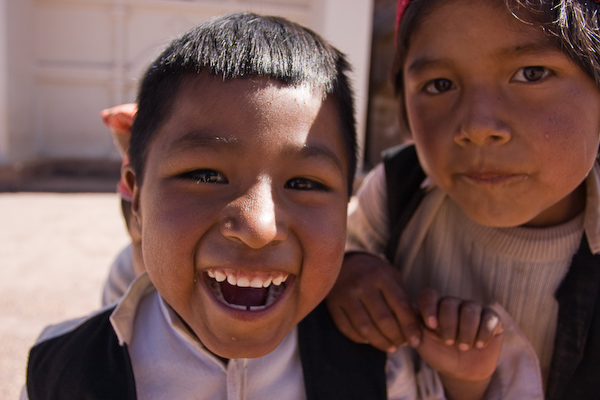 Children in the square keen to have their photo taken

On the island all the restaurants are locally owned and run in a collective manner, each restaurant opens only on certain days to allow everyone to get a regular stream of tourists. Our restaurant for the day was up hill from the square and we ate outside, a shade cloth protecting us from the intense sun. The food was good, fresh trout, and we spent the meal all chatting and relaxing. 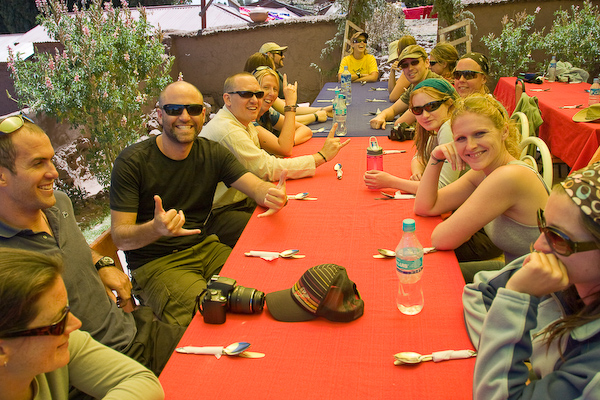 After eating we walked out of the town and down to another dock. We passed through a few stone arches that were quite attractive, seemingly random rocks piled together with no obvious mortar and looking very fragile. A few local girls were hanging around the arches so photos were taken, they didn’t seem to mind. There were a lot of steps down to the dock so it was slow going, much like the following boat trip over to Amantani Island. 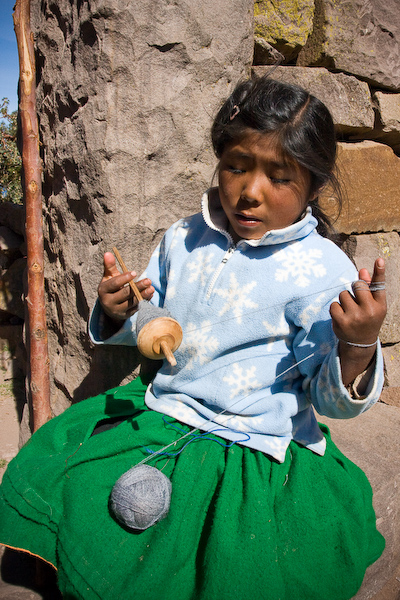 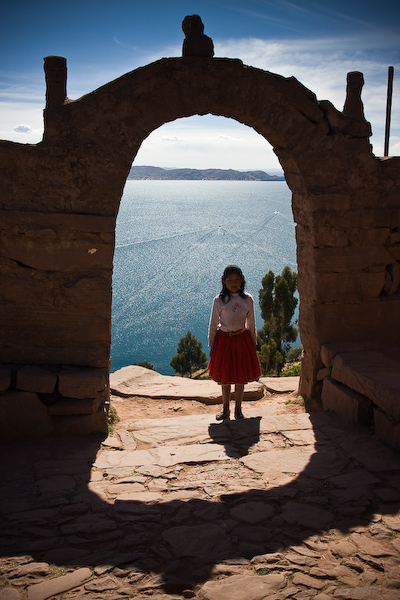 Another girl poses under an arch

Vanessa and Rhys taking a break 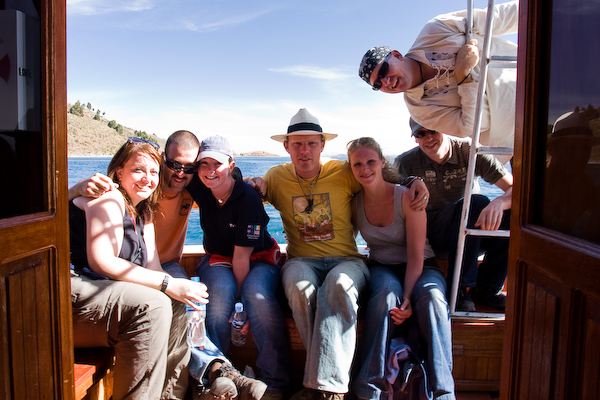 Posing on the boat

At the small dock on Amantani a group of ladies was waiting for us. In our pairs we were assigned to a house and then followed our new Mama up the hill to our accommodation. Keryn and I were in the same house complex as Rhys and Vanessa though we were looked after by different Mamas. The house was quite nice, a two story building built around a small courtyard. It was very pleasant just to sit on the walkway on the second level and just watch the lowering sun and the lake.

An hour or so after arriving we were led further up the hill for about ten minutes, passing other houses, to a concrete football pitch. Here we played a game of football for half an hour or so. It was meant to be us against the locals but we were late starting and there were only a couple of local guys available so we simply made two teams ourselves and played with one or two locals on each side. It was tiring running around but it was a good game, my team narrowly winning with a goal from Danny at the end. Sean had kicked the ball from goal and it came just over the opposition defenders head. Danny was following the ball and got his foot to it just before the approaching goal keeper, guiding the ball into the goal and then celebrating like he’d just won the world cup, racing around the pitch arms in the air and yelling. 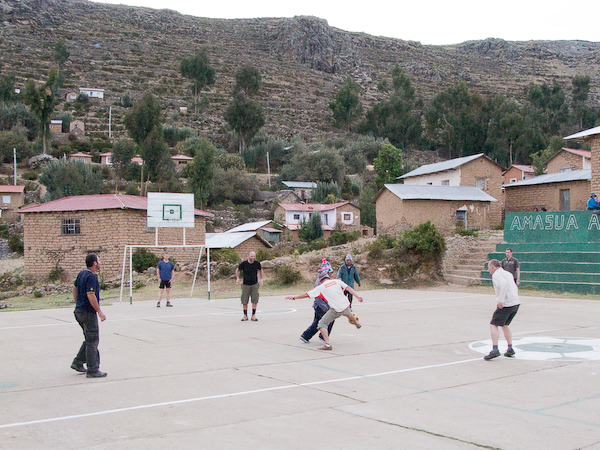 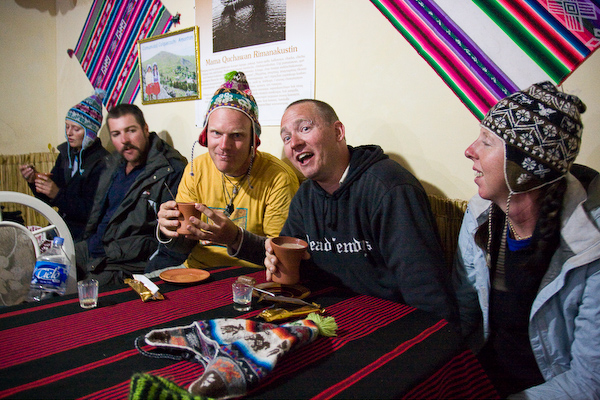 It was getting dark and chilly so we retired into the tiny shop/cafe at one end of the pitch and most people had a hot drink of some kind. Heading back to our houses we were all fed. Keryn and I sat in the small kitchen area, a fire at one end of the room and our Mama cooking for us. Our Mamas young daughter was also present and we kept her entertained playing peek-a-boo. Squeaks could be heard coming from behind the fire and we established that this is where guinea pigs were being housed, I guess near the fire is the warmest place.

Later our Mama came to our room and we were dressed in local style clothing in preparation for a dance at the island community centre. My clothing was simply a poncho and a hat while Keryn had a wrap around skirt, blouse and shawl. We walked in the dark to the community centre and for the next few hours danced and watched some local dances. It was an entertaining night and everyone got into the spirit of things, dancing around at great speed. The local band was very good and our Mamas were always encouraging us to keep dancing. 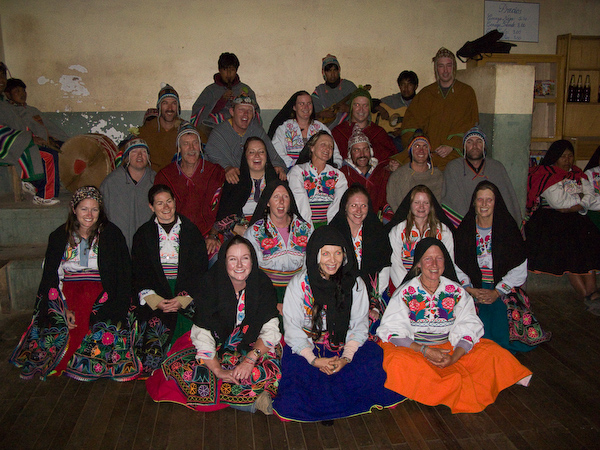 Dressed up for dancing 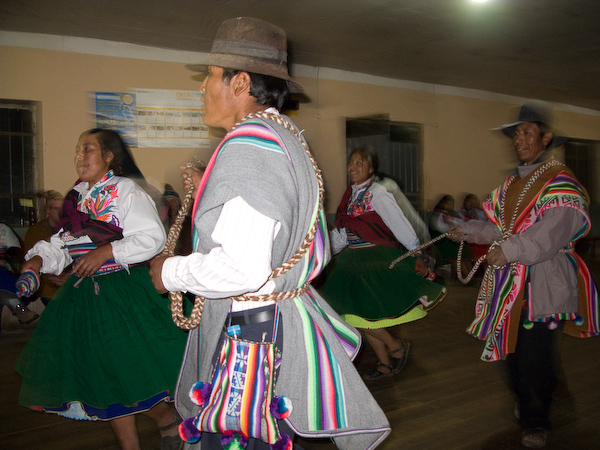 The football and dancing meant we were quite tired, especially given the altitude, so when we got back to the room we were quickly lights out (solar power charged the light) and fast asleep.