The mornings activity saw us head upriver past the point where we had left the truck and onward to a curve in the river where we disembarked to start a nature walk in the jungle. Our guide was Fausto, a knowledgeable and friendly local man. For a few hours we slowly walked and every now and again Fausto would stop and show us something, whether it be to describe a plant and it’s uses, show us an animal such as a small poison arrow frog or a tarantula living in a curled up leaf, or grabbing plant material show us how a wall and a roof could be fashioned with some weaving and judicious scoring. 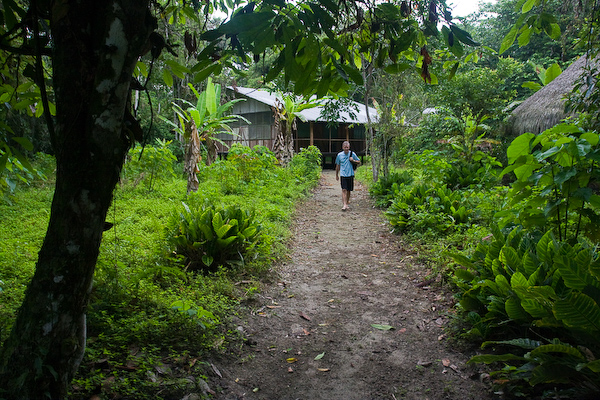 Albert at camp walking away from our dorm 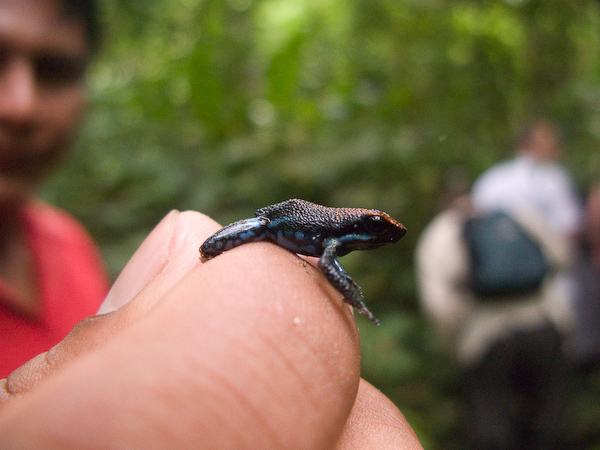 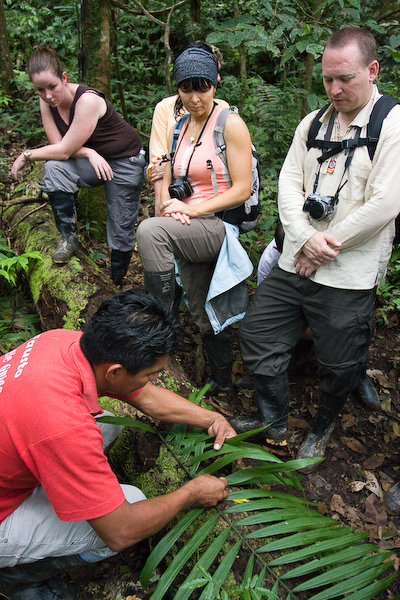 Keryn thinks I type too much and I guess I should be enjoying the location rather than typing all day so I’m going to concentrate on main events and highlights from now on I think. Anyway, the walk took us to a couple of large trees, buttresses nearly joining together to make one big wall. Behind the trees there was a makeshift jungle swing and a few guys had turns running and swinging themselves. 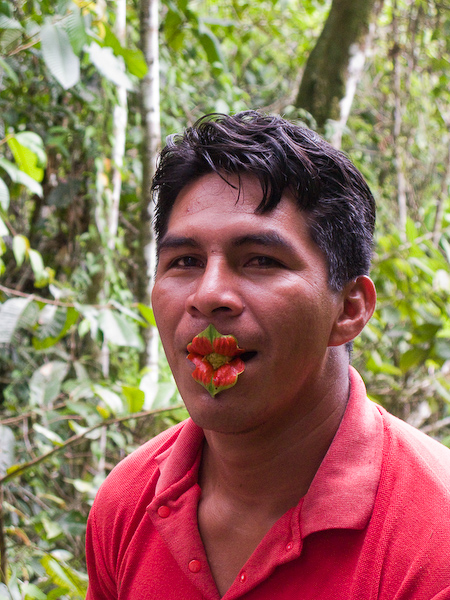 Fausto shows a use for a native flower 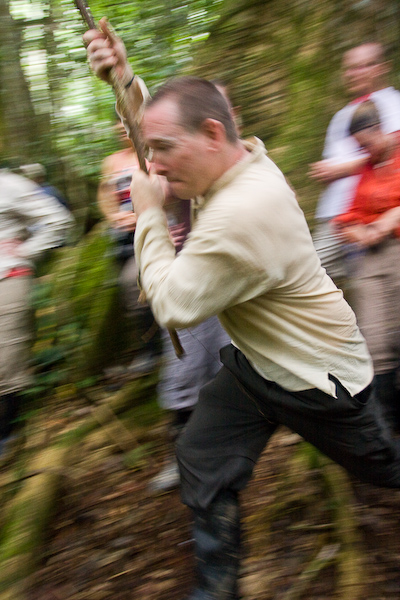 Danny runs for a swing

Further on we reached a stream and here we had a short rest before heading downstream along the stream bed. We had all been provided with gumboots and made good use tramping through the water. There were a number of logs fallen into the stream and most of them had a number of large, palm sized spiders crawling over them. Thankfully the eight legged critters tended to scarper when we got near. Every now and again the stream would get deeper, nearly up to our waist at places, but each time it was an easy wade through for a short time before the water level lowered. We ended when the stream met the river where our boat was waiting for us. 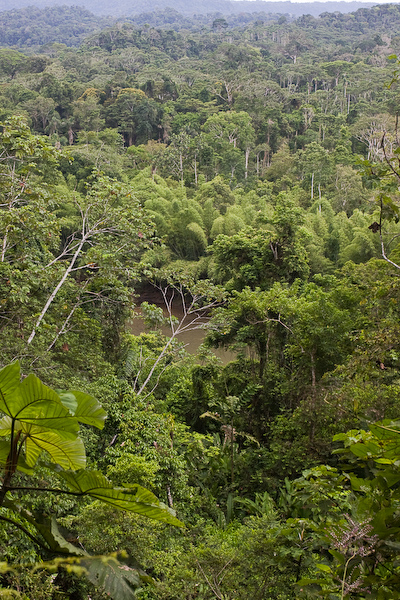 Looking out over the jungle 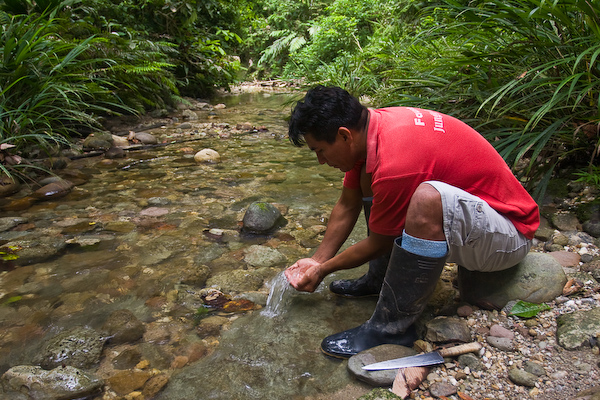 Refreshing before walking along the stream

Most of us ended up in the water cooling off, the jungle being hot and sticky with humidity. This was followed by a packed lunch and then we were into the boat and heading to the next destination. We were led up a path and entered a wooden building with a dirt floor. Along the walls of the building were mock-ups of various traps. Fausto explained the mechanism of each trap and gave brief demonstrations; most of the traps were designed to catch specific animals such as armadillos or ocelots. There were also specimen jars containing snakes and insects, some of the beetles were huge.

Walking outside we sat on benches underneath a covered area and Fausto explained the use of a traditional blowpipe. This was followed by a small competition; we all had two attempts to hit a mock-up of a parrot attached to a distant target board. No one hit the parrot but a few people got quite close and most hit the board at least. A few also had a go at aiming for a wasp nest in a tall tree and we all ran when Sean hit the nest, angering the wasps inside. There was a bit of relaxing in the lined up hammocks before we ended our stay. 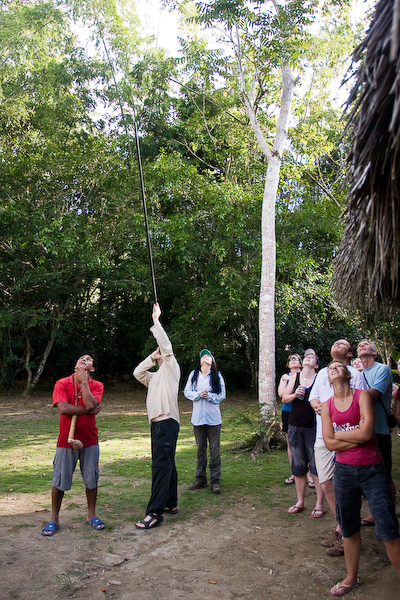 Danny aims for the wasp nest as everyone watches 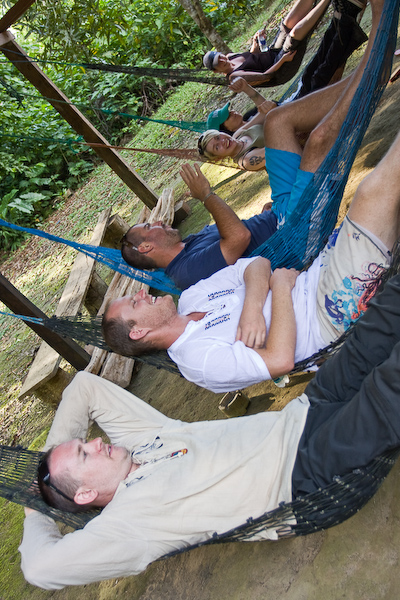 Relaxation time; from the front we have Danny, Sean, Rhys, Sophie, Melissa and Kerrie

It was getting to late afternoon as we headed back down the river. We arrived back at the lodge in time to get a few drinks and then sit and wait for the sunset. We sat and talked and watched the setting sun, spotting shapes in the clouds on the horizon. It was quite idyllic. Dinner was followed by cards and drinking. We had a night nature walk that turned into a bit of a Halloween fest with Fausto telling a strange ghost story, the point seemingly the fright he engineered at the end with a loud yell before he raced off back down the path. A couple of times as we walked back he would burst out of the bush and run away once more. The night continued with further cards, drinking and some dancing. Kerrie was particularly funny, finding a life receiver to tangle herself in while dancing around. The poker came down to me and Kerrie in the end and going all in Kerrie got the better cards, oh well. 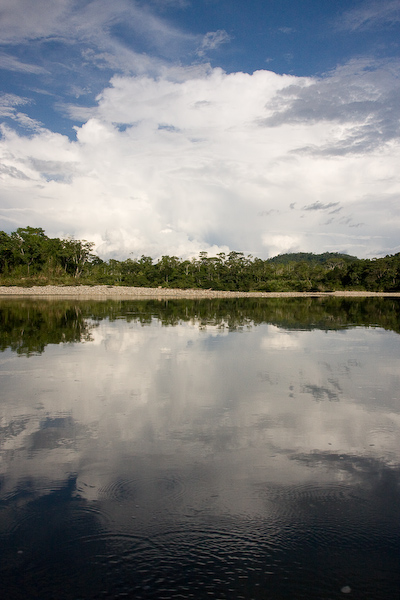 The afternoon light on the river 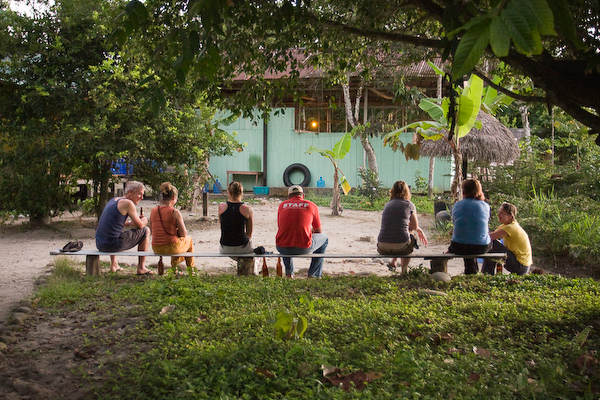 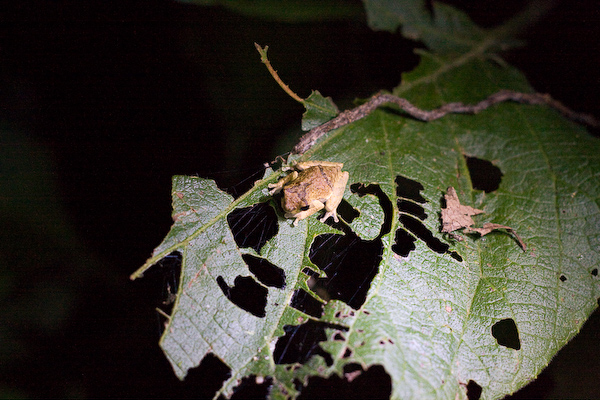 A frog found on the night walk