In the early hours the boat set sail south, taking us back to the east side of Isla Santa Cruz towards the small offshore Islas Plaza. We woke and got up to find ourselves in the narrow straight between the North Plaza and South Plaza islands. Here the main attractions were the colourful shrubs, swallow tailed gulls and lots of sea lions. There was also the chance to maybe see hybrid iguanas, a mix of the land and marine iguanas found on the islands.

At 8am we were heading for our dry landing. There were sea lions on the steps we were about to clamber onto so Wilo had to get them to clear off. He did this by standing in the front of the dinghy and clapping his hands; the sea lions seemed to find this most offensive and slipped off the steps with some farewell barks. The second dinghy load took a few minutes so we took photos of the sea lions playing in the water by the steps. The bull was making quite a racket, swimming a small circuit and barking at us and anything else that would listen. 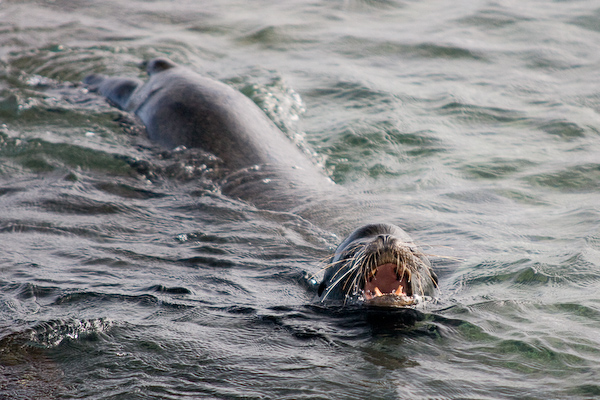 A bull sea lion lets himself be heard

The visit commenced and Wilo told us about this island and some of the animals while we waited for another group to move on from the collection of iguanas nearby. There was a dead iguana on one of the rocks, slowly mummifying in the salty air, its skin pulling tight over its bones. The other group moved on and we got closer to the local iguanas. Wilo explained about the hybrid iguanas that can be found on the island, though there are only three of them. We didn’t see any of them in the end.

Heading inland we walked up the shallow slope towards the cliffs on the south side of the Plaza. The vegetation came in two forms; there were Opuntia Cactus, stumpier than those seen previously, and also a succulent of some kind that came in a range of colours from green to red all on the same plant. If the sun had been out in a blue sky the range of colours would have looked amazing. With overcast skies the effect wasn’t quite so good but it was still attractive. 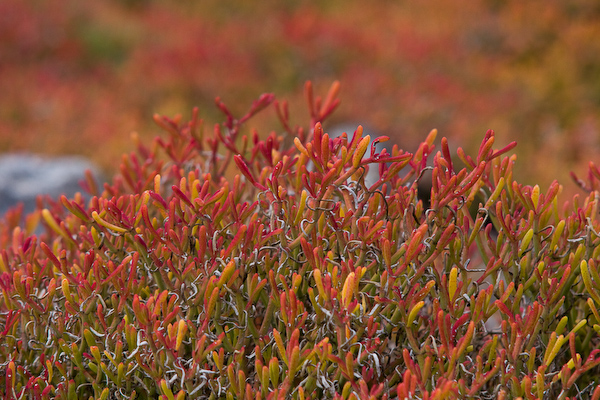 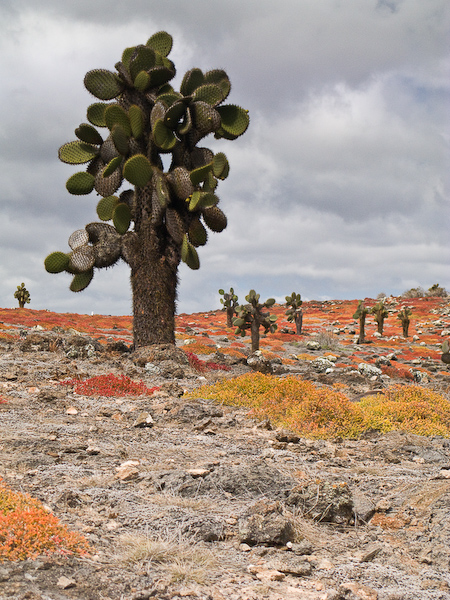 Reaching the cliffs, only a short walk, we wandered along looking at the birds and sea lions resting in amongst the rocks. Swallow tailed gulls were present, one of only two nocturnal gull species found in the world. These ones were awake and kept an eye on us but were generally reluctant to leave their roosts. The male sea lions on this side of the islands were all without a harem of females, all having lost fights or being too young to challenge the dominant bulls on the north coast. Most of the animals were resting or sleeping, obviously this time of the day is one big siesta. 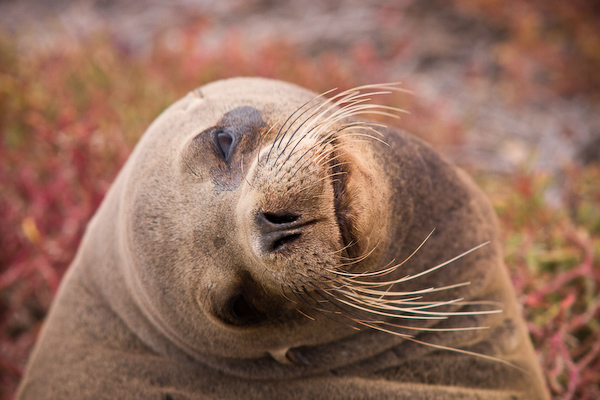 One of the harem-less bulls 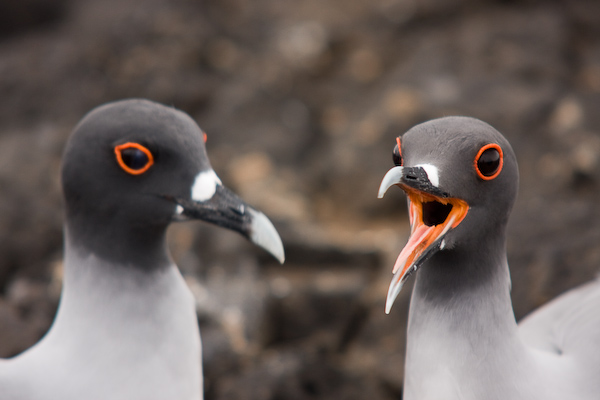 We continued walking and saw more of the same animals. There were a few sea lions with pups and we watched a few pups playing at various points on our circuit of the island. There were also finches, plain brown ones almost looking like fat sparrows and bright yellow ones closer to canaries. We completed the circuit and after clearing out the sea lions now back on the steps we were transported back to the boat which almost immediately set sail again, heading further south to Isla Santa Fé. 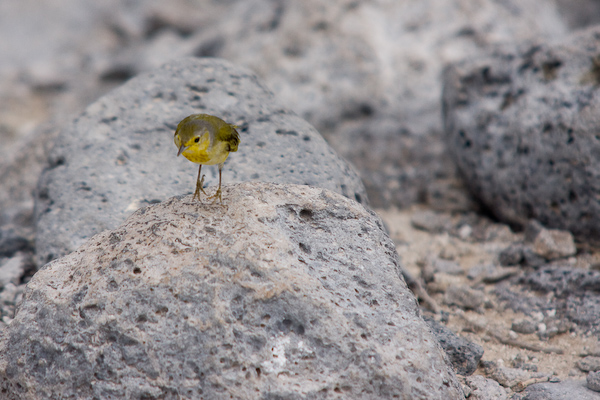 A little yellow finch hops along 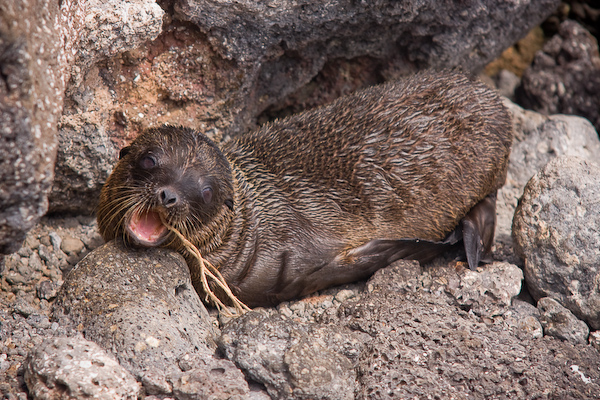 A pup plays with a piece of plant 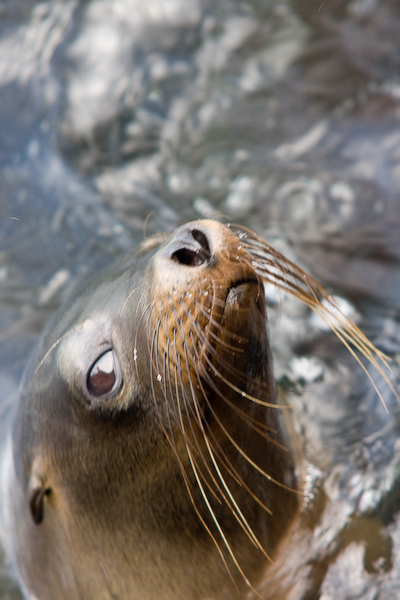 The trip took a few hours and we arrived just before lunchtime. The weather had cleared and the bay we arrived in (which may be called Fondeadero, I’m not sure) was beautiful with azure water over a sandy floor. The afternoon wet landing saw us walk only a short distance, a few hundred meters, from one beach inland and around to another beach. Here we saw endemic land iguanas which are only found on this island. The ones we saw were large and a pale peach colour rather than the brighter oranges and yellows of the more common iguana variety. Land iguanas can be easily identified by their smile, they all look friendly and a bit dopy. Marine iguanas, normally black, are not so friendly looking and have a straighter line to their mouths. 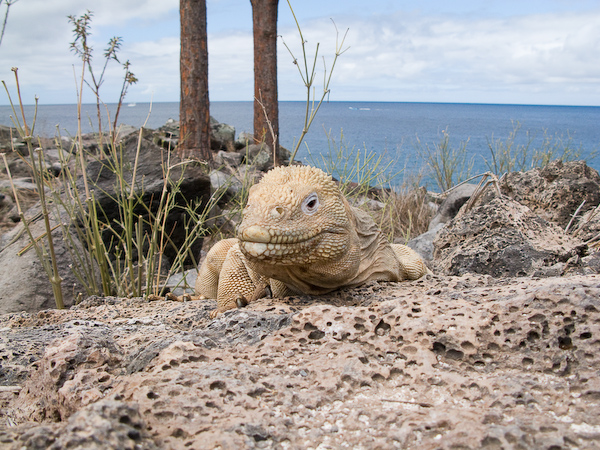 The endemic iguana smiles for the camera 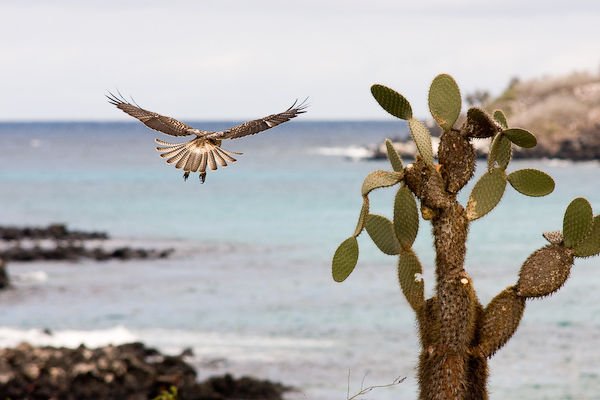 We saw another new animal while looking at the iguanas, a native Galãpagos rat ran by. We also saw a Galãpagos hawk back towards the beach. As I recall we didn’t really see much else on the island, the path took us between rows of the usual lifeless appearing trees. There was one tree with a few flowers and some leaves, a bit ahead of itself perhaps. We came to the second beach and found another group clustered around taking photos. They were taking photos of a Galãpagos hawk perched near the beach. Over the next twenty minutes or so I was happily entertained by a pair of hawks as they flew around the beach, often landing in positions seemingly chosen to provide me with good photos. At one point I had been following one hawk for a while and it must have decided my lens was a good looking perch because it flew straight at me, only turning away when I lowered the camera. It was pretty cool watching it approach for those few seconds through the lens. 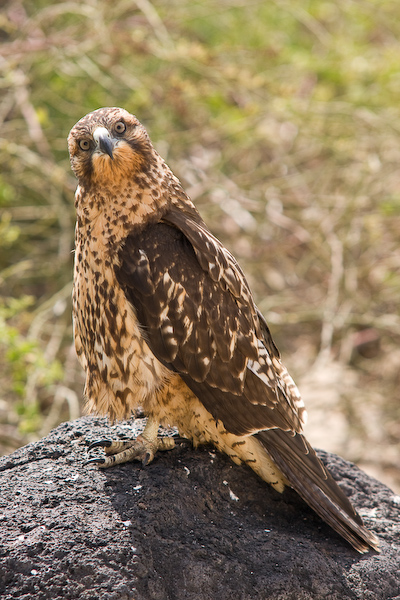 Wondering what I was doing I guess 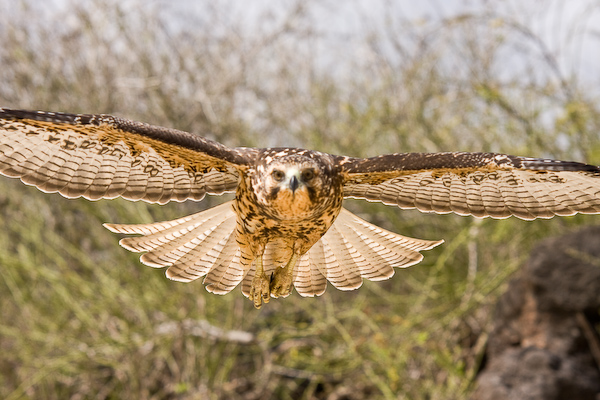 Flying for the lens

There were friendly sea lions on the beach keeping the rest of the group entertained as I came back to join them all. We were soon picked up from the beach and were then shown the sharks swimming along the rocky promenade that came out from the beach. They looked quite big, even if we could only see them as dark shapes through the sandy water. Heading back to the boat we got ourselves ready for some snorkelling in the bay (far away from the sharks).

We got changed and were taken in the dinghies over to one side of the bay where we got out into the water. The water was much clearer this far away from the beaches and we snorkelled following the sea wall which consisted of huge blocks of rock. There were hundreds of fish as usual and we were lucky enough to find a marine iguana feeding underwater. It was clinging to a large bolder and eating the algae growing on the rock, looking more like it was on land than underwater but the fish swimming past reinforced the depth. 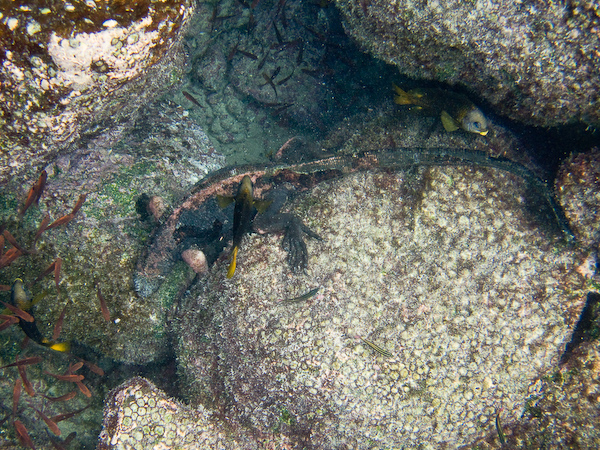 A little further on I was ahead of Keryn and saw a large bull sea lion heading my way. I floated as he passed underneath me and noticed that even underwater he was still barking away like he would on the surface with bubbles appearing each time he opened his mouth. It sounded muffled and quieter underwater, as you’d expect I guess. Keryn again wasn’t so keen to take photos, more concerned with putting distance between her and the big guy.

The main attraction in this bay was the chance to see turtles. Wilo picked us all up and took us to the centre of the bay. Actually Denise was at the motor, steering us at this point. Near the center we were again in the water and heading as a group towards the beaches. The water was a bit more silty here, possibly because our group was stirring it up. We had to swim together as there was a chance any turtle would move on as soon as it saw one of us. We approached a circle of rocks in the water and there was a turtle. Actually there were three but I only saw the first one and then spent ten minutes following it as it glided away from the group. It was peaceful, in the end just me and a turtle making our slow way back towards the boats. I gave the turtle a bit of space and it very slowly headed to the surface, grabbing a breath of air before submerging again. At this point I headed back to the bulk of the group still at the circle of stones.

Reaching the group I realised there were more turtles, two larger specimens still in the rocks with the group watching on. Keryn and I were some of the last to leave. Another turtle came along, bigger still, and we had the absolute pleasure of watching the turtle come between us and head to the surface. I could have reached out and touched it shell but figured rules are rules so just watched in float before me. Keryn got some photos very close up and even after this one had floated away we still hung around and took more shots of the remaining turtles. 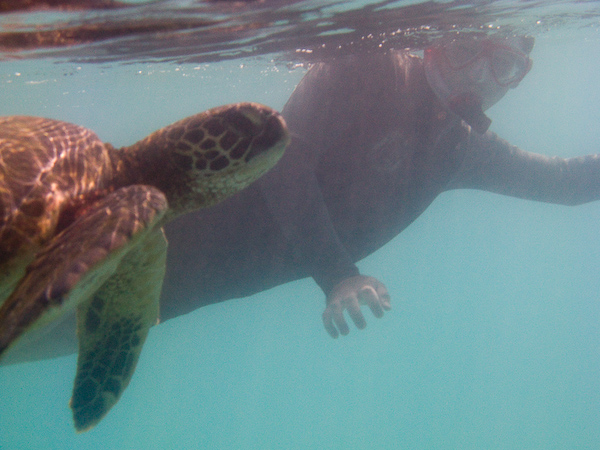 Swimming with a turtle 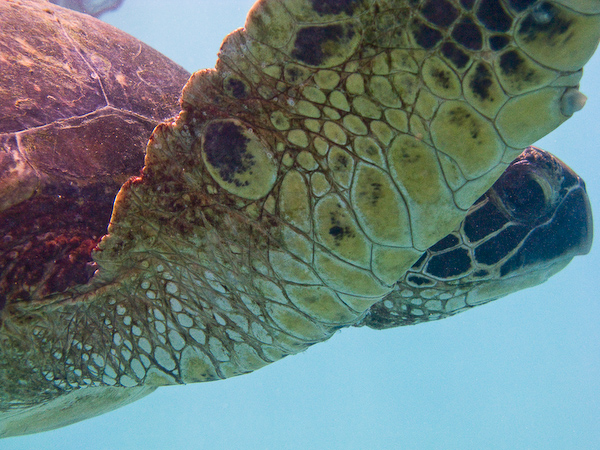 Close up with our new friend

Eventually we’d had enough for one day and got back in the dinghy, Wilo having come close after Frank got a bit worried by an approaching sea lion. In the dinghy we saw off the sea lion and went back to the boat for a rest for the remaining afternoon.

The boat sailed north heading for Santa Cruz once again. We would be mooring for the night in the Canal de Itabaca, the strip of water between Isla Santa Cruz and Isla Baltra. The journey was taken over ever calming seas and we spent a lot of time on the top deck relaxing over drinks, reading books, listening to music and admiring the views. The sunset, once it came along, wasn’t as nice as the previous few days but even so was pleasant to see. The orange sky got darker and stars appeared above us.

After dinner Wilo gave a bit of a speech and the crew were introduced to us. We were given envelopes for any tip we might want to give to the crew and to Wilo and afterwards there was music played and the opportunity for one dance, Wilo impressing with his dance moves. Everyone settled down to watch a movie and Keryn and I did the boring thing of retiring to pack some more, tomorrow our last day on the islands.